“Rajarajeshwari Nagar.”
“100 rupees, medam.”
“Yaake? It’s hardly seven kilometres from here. I’m not paying so much. I’ll take another auto.”
“Illa medam, give me twenty rupees more than the metre. Okay, only ten rupees more. (Customer shakes her head) Sari medam, come. We just don’t get any customers from there, so asked you for more, that’s all.”

After 12 years as an autorikshaw driver, Mahadev quit. He rented out his auto to another  driver and took up a job as a car driver. He has also started a real estate business with a friend.

Originally from a village in Mandya district, G N Mahadev, 36, came to Bangalore after his SSLC, looking for a job. After working for three years in a Tavarekere garment factory for 3 years and then in Kidwai Hospital for four, Mahadev started driving his autorickshaw in 2000.  He lives with his wife and two-year-old son in a leased one-bedroom house in Srinagar. I spoke to ..

What do you think of life in Bangalore after spending so many years here?

Bangalore is busy, and it is a good place to earn a living. Sometimes, I have to help my parents out in the village, and now I have to support my wife and son. I can’t do that working in the village.

Why did you quit your profession as an auto driver?

I just got tired of it. I don’t like the way auto drivers earn their living, so I thought I would get out of it completely. It’s not that I earn any more than I used to as a car driver (I get Rs. 8000 a month now). After working for 12 years, I feel it’s not what I want to do, so I quit. 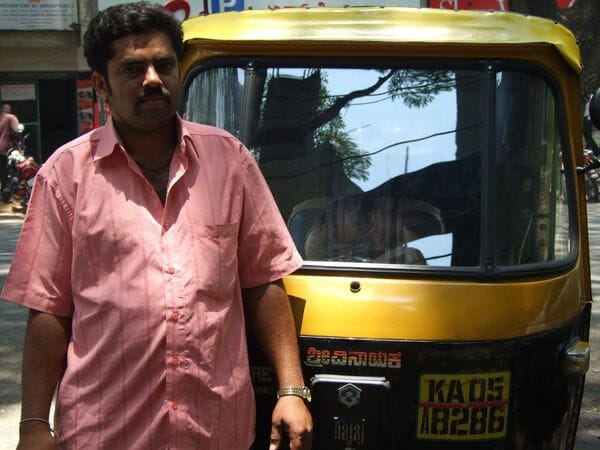 How does an auto driver think about earning his living? Why does he demand more for some places?

I used to set a target of about Rs. 500-600 per day for about six years after I began driving the auto. Now, there’s too much traffic and too many autos. So, it’s very hard to tell how many passengers I may get in a day. I couldn’t set a target for the last few years and ended up with only Rs. 200-300 a day.

Many people are of the opinion that auto drivers tweak their metres and demand extra money. What do you say about this?

People definitely tweak their meters, there’s no doubt about it. They are bad and have excessive desires. It may be true that they are not making enough money, but there are also so many good people who manage to earn a living without tweaking their meters even if they don’t get enough money. Such people don’t like to cheat, and I’m one of them. The police have checked my meter many times and have never found it running (fast).

Left to me, I would only put on the meter, and not ask for extra money, but there are people who want to decide how much to pay before they get onto the auto. With them, I fix a price and stick to it.

If four people want to go in your auto …

It’s just a matter of convenience for both of us – the driver and the passengers – so I don’t think it really matters. I think this traffic rule of not taking more than three people in one auto doesn’t really make sense. I have taken four people many times when they agree to pay one and a half times the fare.

Passengers always feel auto drivers are unfair and rude. What do auto drivers themselves think about it? Do the tables turn when we get into their shoes?

It’s definitely not fair. It’s our duty to take the customers wherever they want to go. They may be running late and will be in a hurry. If we refuse to take them, they scold us and go. I never refuse, but if the place is very far away, they themselves offer one and a half fare. Sometimes, if it’s really far away and they don’t offer, I ask them myself.

How do passengers behave with you?

Some passengers are rude, and most of the time, it’s their fault. They don’t tell me to take a turn till the last minute and scold me if I find it difficult later. If I make a mistake I immediately correct myself and try not to make it again.

We passengers think that auto drivers are comfortable with driving by default. Is it true?

I haven’t got used to people’s irresponsible driving yet. It’s still very difficult when vehicles are about to bump into you and you have to apply the brake suddenly. As for myself, I don’t jump signals unless my passengers are in a very big hurry and they tell me to go as fast as possible.

If you had another shot at making this choice what profession would you pick?

I would become a photographer and own a computerised editing studio.  In fact, even now I may have a chance to pursue this profession. A friend of mine is calling me to open a studio with him. We don’t have any capital yet. We will look into it in a while, when we have more money. Until then, I will continue car driving.

What does your current work involve?

The household I drive for is in Mavalli near Lalbagh West Gate. I have to take ‘Sir’ to Infosys in Bannerghatta road some days. On others, I take his wife and children around – the children to Basavanagudi for their swimming lessons – sometimes to Mekhri Circle or that side of the city for some work. If I start at about 9 am in the morning, I finish at about 8.30 pm.

They are very nice people. I’ve known my employer since I was working in Kidwai. He used to work in the electrical department there. Later, when I rented a room in Srinagar, I found he lived next door. For my wedding, they gave me a gift of Rs. 50000 for wedding expenses and they help me in my times of need. So I’m happy working for them.

What do you think of politics? and political parties?

I have been voting for Congress so far. They promise all kinds of things but hardly ever do any of it. None of the parties are okay. Sometimes I feel I don’t really want to vote at all. But in the village the Karya Kartas ask me to vote for their benefit. If I do, they help out with our problems in the village. This is important to me because every vote counts in the village for our problems to be solved.

But in the city it really doesn’t matter to people whether they vote or not because they already have all the facilities. Many times, I myself don’t feel like voting. But if the people here don’t vote the party we vote for in the village won’t win due to fewer people voting overall and we don’t get the facilities promised. I feel sad about that.

I am interested (in politics). If they offer me money and if it’ll help others in my village I will join.

Politicians say they’ll help us with the Rural Ashraya Housing Scheme, but when we vote for them they won’t win because the people in city don’t vote. If they do win and all of us villagers go to the MLA of our area in unity, they help us out. From these politicians, we expect water facilities, road facilities etc. We force them to do it. If they don’t, we elect another MLA in the next election.

Are you a part of a union?

Not anymore. I used to be part of one, years ago when I worked in Kidwai. They promised to get us all other jobs, but they got caught up in a court case. We were not united and didn’t pursue in ourselves. So they gave us Rs. 50000 each and sent us away. I haven’t been interested in unions since then.

Are you part other organizations like KRV or Jaya Karnataka or any other such organisation?

I’m not a part of any of them. I’m not interested and I really don’t think it helps the Kannada cause. There’s no unity there. People only do it for money, and the name of Kannada also gets spoilt in the process.⊕

The reason given: The parents of other kids would dislike their wards associating with poor kids. Are you a parent of this kind?

Dreaming of the day when we don’t have to segregate waste!

Idea of not having to segregate the waste looks wonderful. But do we care about the long term effects of it?

On immunity to retired bureaucrats