Bangalore’s face is being reconstituted. Roads are being widened but elected representatives are not consulted on this process. The Oberois are given control of about 160 acres of land around Hebbal Tank and they go on to build a floating restaurant on the lake, denying free access to the lake for the publics. “So what is happening to the ‘commons’? What is this development that is done ostensibly in the name of ‘public good’ but the public is not being consulted?”

These were the questions that Leo Saldanha of the Environment Support Group (ESG) raised to Michael Goldman, professor of Sociology and Global Studies at the University of Minnesota, in Minneapolis, USA. Goldman is currently in Bangalore as part of his research project titled ‘Bangalore: The Making of a World City’. He is studying the transformations of land, government and citizenship that are taking place under liberalization in Bangalore. He spoke on "Rethinking the Indian city, reclaiming its commons" on 17th July 2008. 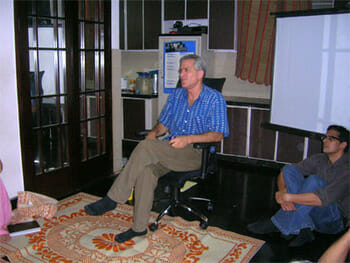 Goldman’s talk was an attempt to understand the social and political contexts in which projects such as road widening and lake privatisation, among others, have been going on.

“If you see today, it is the Information Technology Parks, the SEZs, the flyovers and the international airports that are being touted as ‘the commons’” says Goldman, “all those individuals who refuse to give up their lands for the city’s development are the private barriers”.

When the individual gives up his/her land for the city’s greater good, he/she becomes a world city citizen. Otherwise, he/she is considered an inefficient city dweller who has to be moved out through the application of law and eminent domain.

Goldman notes that when land is acquired from the farmers at Bellandur to create an IT Corridor, what is happening in reality is an effort to make the land ‘productive’. He explains that value gets unleashed when lands are taken away from hawkers, squatters, dhobis, the individual farmers and try to make it ‘productive’.

The farmer is paid peanuts for his land, but the next day, when the real estate developer announces that he has acquired this land, the value of that land goes up. The day when the developer lays the first stone on that land, the value goes up further. The process of unleashing value does not stop here.

“You find that the people who have been dispossessed from their lands enter into various economies,” he adds. Some of them, he says, enter the migratory construction labour industry and are taken to Dubai to work on real estate projects there. They unleash value in Dubai by contributing their labour. The value thus circulates locally and internationally. 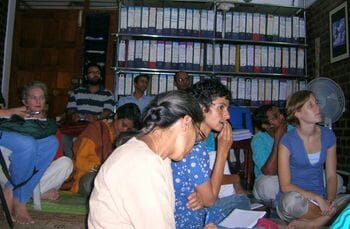 Goldman’s prescription for the people of Bangalore is to get involved with the city and understand it at closer quarters. It is known by now that the informal economy is in fact the biggest contributor to urban development. Then why is it that the IT corridors alone are referred to in every paragraph of a policy document, demands Goldman. Those people who work in the informal economies don’t use magic boxes and flyovers to commute. They live close to their places of work. Then for whom is all this development?

Goldman suggests that people get proactive and gather stories of those whose lands have been notified and who have been moved out, who are not just the poor, but belong to the middle-classes as well. “Find out what is happening and on the basis of this, hold your governments accountable,” says Goldman. He goes so far as to say, "Demand moratoriums on JNNURM (Jawaharlal Nehru National Urban Renewal Mission) and World Bank loans that are issued for the city’s development. Find out what people really need and develop a world city based on it.”

Goldman points out that the world, especially Australia and China, are watching Bangalore’s IT development and using it as a model for their future plans. “The Bangalore model is being taught in business schools across the world. Now is the time to create a functioning municipal government that can represent locality based concerns about land.” ⊕

Give us a navigable mud track

A citizen calls for the public to wake up from their apathy, and the authorities to their duties, to help restore the avenues of Koramangala.

SAHAI is a dedicated suicide helpline that you can call and hope to find a friendly, helpful voice that gives you hope, courage and strength. A conversation with Anita Gracias, a SAHAI volunteer.

Bangalore’s governance has been captured by vested interests, say citizens. They have decided to protest if the government continues to neglect public welfare.