The Pirates of the Caribbean are back, and Johnny Depp leads the way. Rob Marshall replaces Gore Verbinski in the director’s chair, but the difference hardly shows. 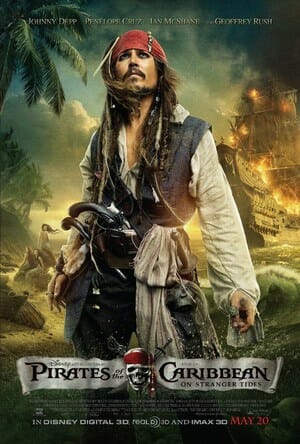 As with the previous films, Pirates of the Caribbean: On Stranger Tides is an entertainment laden ride, interspersed with magical mystery and many guffaws. The great pull to the film lies in the aura that surrounds its principal protagonists and not the meatiness of the plot.

This time around, Captain Jack Sparrow (Johnny Depp ) finds himself coerced into joining hands with the fearsome pirate Black Beard (Ian McShane) to track down the legendary Fountain of Youth, with its promise of an extended life. Joining them on their quest is Angelica (Penelope Cruz) – Black Beard’s lost daughter and the woman that Jack Sparrow once loved and deserted. But to reach the Fountain, he must once again cross swords with his old foe and sometimes friend Captain Hector Barbosa (Geoffrey Rush), also out on his own parallel hunt for the same elusive treasure.

As always, Johnny Dep adds a roguish insolence to the script in the way that only he can, as Captain Jack Sparrow. In characteristic fashion, he continues to hold his sway over audiences in the garb of the resourceful, lovable scoundrel that he plays in so many shades. Every time the same, and yet each time so different.

Penelope Cruz is a worthy leading lady and lives up to the challenge of being the latest addition to the Pirate crew. Though an old Pirate faithful still misses the well loved Keira Knightly, Cruz is a fitting replacement and matches Depp stroke for stroke.

Once more, Geoffrey Rush brings Barbosa to life, with all the associated maddening love-hate oscillation that he is meant to inspire. But the revelation in this film has to be Ian McShane, who leaves us with the deliciously evil Blackbeard. In him we have another wonderful addition to the repertoire of unforgettable characters that Pirates of the Caribbean have left us with over the years.

Though the franchise is now four instalments old, the script still manages to exude the old freshness, retaining both its unpredictability and its sense of humour.

I’ll go with a rating of 3 on 5 for this film. The legend of the Pirates lives on.

You can pre-order Lucia from Citizen Matters now

One year ago, actor-director Pawan Kumar, 30, announced that he was tired of searching for a producer for his Kannada script ‘Lucia’. Today, he has finished his film with investment from his fans and is running a crowdfunding campaign for the film’s distribution.

Behind every doll there is a story

It was not just an exhibition of dolls. This recent event in Bengaluru also conveyed the story behind these handcrafted figurines.