Think about libraries, and what comes to mind are long, dusty rows of somewhat mangled books, and grumpy librarians. But new generation libraries in Bengaluru are far different.

These libraries are not too high-brow, nor are they content with being collectors of classics or most popular reads alone. They engage with readers, consider their preferences while expanding collections, and are easily accessible with online book catalogues and door delivery options.

Suman H M, 19, second year degree student at Jyothi Nivas College, has been a member of Just Books library for the last one year. “They are convenient as I can opt for door delivery any time. But I prefer to go and collect books myself as the library is close to my home,” she says. Just Books has 13 branches in Bangalore.

Suman had been a member of the Indian Institute of World Culture library for a long time before she shifted to Just Books. “Public libraries do not add to their collections often, most books are old and I could not find the kind of books I wanted to read.”

Readers call the shots, and quickly

New age libraries which mostly popped up over the last decade, expand their collections often. More than owners’ decisions, readers’ recommendations decide which book makes it to the library. Some libraries publish book reviews in their websites.

Vani Mahesh, Founder of Easy Library in Koramangala, says, “Members read reviews online and suggest books even before they are released in India; we don’t need to spoon-feed them. We decide on the number of copies depending on demand.” 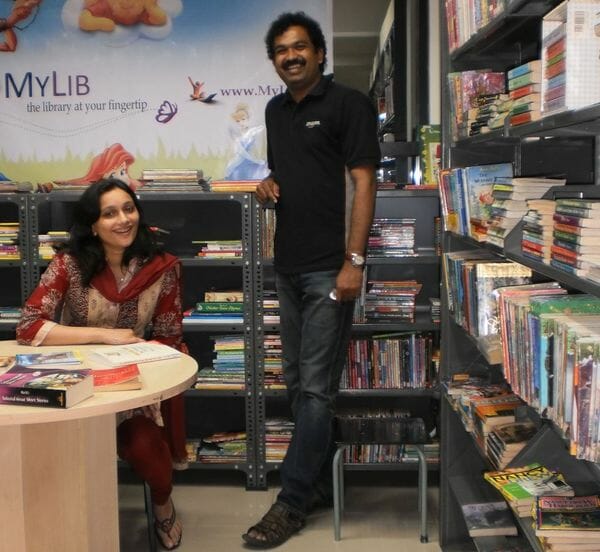 Mylib.in, a two-year-old library in Jayanagar 9th block, takes an even more reader-centric approach. In its website, it has an option which allows members to order a book which the library does not own. The library will buy the book and lend to the person who ordered it, within seven days.

“We wanted to give more flexibility to readers. Some 50-100 books get published every week. We buy 40-45% of books ourselves based on reviews, current reading trends and pre-determined demand,” say Bhavna Desai and Dilip Kumar, Founders of Mylib.in.

For whose those reserve books, they are made quickly available. Being online libraries, they do not have difficulty finding customers either. “There are readers from places as far as Hebbal and Yelahanka. They order books for home delivery, but drop in at the library once in a while,” says Vani.

While many readers prefer online facility due to time constraints, they still like to come to libraries and browse books. In Easy Library, about half the customers use online facility, but not many restrict themselves to online or offline.

Some libraries also give spaces for socialization and ‘family time’. Shany Augustine, Founder of the library Fun n Books in Kothanur, says that mostly families come to the library together. Started in late 2010, the library has membership of 47 families now. She says that libraries can be an alternative for families to spend time together, as compared to malls.

Mylib.in also has space for people to sit and read, and discuss. The founders believe that ambience is important and that the traditional claustrophobic atmosphere of libraries should change.

Children are a different cup of tea

Activities for readers, especially children, are another feature of many new libraries. Easy Library has held events like story telling, creative writing competitions and reading sessions for children over the years. ‘Meet the author’ events are held for both adults and children. Mylib.in and Fun n Books are also planning to conduct regular events for customers starting this year.

A story telling session at Mylib.in, one of the new-age libraries based out of Jayanagar 9th Block. Pic courtesy: Mylib.in

In the case of children, activities are aimed at developing their reading habit. In fact, activities are a major focus in most exclusive children’s libraries. Discover Kids, a library in HSR Layout for children aged 2-10 years, facilitates learning through puzzles and toys, in addition to reading activities.

As children have more options for entertainment and high pressure for studies, it is important to initiate them into reading early, says Subhashini Rajesh, Founder of Discover Kids. Started five years back, the library now has a membership of over 400. It was inspired by the children’s centres in public libraries in the US. Books are divided based on the learning capacity of different age groups.

“Most members are in the age group of 2-6 years; that’s when they start reading. They also have lesser options for entertainment compared to older children. Beyond 10 years, it is difficult to get them to read,” says Subhashini. At the library, children can socialize and also spend time with their parents. Though the library has a website and option for home delivery, this is done rarely as most people prefer to come down to the library.

Though there are many good Indian books for children from companies like Tulika, Katha, National Book Trust etc, there is not much awareness about them, says Subhashini. “Parents mostly confine themselves to well-known western authors, and we have a bigger collection of western books too. But parents do browse to find new books,” she says.

Out of the Box, another children’s library in JP Nagar, has programmes in reading, thinking and comprehension development. The library has more than 500 members and some 50-70 enroll in the programmes each quarter, says Founder Sheela Anagolum. Though books of all genres are available here, those in the programme will be given specific books to read, in line with their school syllabus. Games, puzzles and group activities are also part of the programme. It mainly caters to 3-16 year age olds.

Though the most popular authors and genres remain the same, readers today are experimenting more and opt for more niche, unconventional books, opine libraries. About a third of the collections in most libraries are non-fiction books. Of these, biographies, self-help and parenting books are most popular.

Books like ‘Islam: A Short History’ by Karen Armstrong, ‘Three Cups of Tea’ by Greg Mortenson, and historian Ramachandra Guha’s books are among the fast-moving reads recently, says Kumar.

The most popular fiction categories are thrillers, mysteries and romance. For children, Amar Chitra Katha and Enid Blyton series are still popular.

Current events also influence reading patterns; during the last six months, when the political crises in Middle East was in news, people many books on Middle East, says Kumar. “About 20 years back, everyone would read a limited set of books. Now about more books get published and become available in India soon. While earlier about 90% of people would read a popular author, it has come down to, say 55% today. Many new authors are becoming popular. About half the readers would browse for books, the rest would just pick up one and read,” he says.

Vani opines that Indian readers have always been more sophisticated and read books that are not best sellers too. “But people do go along with mass opinion more often. Popular reads like Jeffrey Archer and Agatha Christie are light books; other books need time and the right mindset to read, and most people prefer to buy them instead of borrowing,” she says.

A city matched for libraries

Bangalore is good for libraries, say library owners. Young floating population in Bangalore read a variety of books; also the city has more of elite population, which read more. While technology has helped new libraries grow, growth of the publishing industry may also have contributed to growth of libraries, they say.

“In mid-2000s, bookstores like Crossword started coming up and there was more focus on books as an industry. Demand was visible and more books were published too,” says Kumar of Mylib.in.

Vani cites the poor condition of public libraries as the reason private libraries grew. “When I started in 2001, there was reluctance among the elderly especially, to use online option. There would be about five techies ordering books in a day. With broadband becoming popular in 2004-05, people started using online facility,” she says. From 3,000 books, Easy Library’s collection has grown to 26,000 now. She plans to start a literary magazine online for her customers, giving information on books, awards, reviews and authors.

Libraries are busier during summer season and in October and December, when children have holidays. Most libraries plan to improve their collections, hold more events and use better technology, rather than establish new branches, as accessibility is not a constraint in online usage.

“Going online improves not just reader base, but also collections. As a neighbourhood library, we can cater to only residents nearby and not many of them would be interested in niche books. As an online library, there will be many customers who demand books in niche segments, which adds to the depth of the collection,” says Kumar. Mylib.in has Hindi, Kannada and Tamil books also, and plans to expand these collections.

The old are shaking up anew

Meanwhile, Eloor library in Shivaji Nagar is also planning to go with the times. With a collection of over one lakh books and customer base of about 18,000, Eloor still is a favourite in the city. It had started with 5,000 books in 1988.

Gopal Rao, Manager at Eloor, says that their customer base has not been affected by newer libraries, but they plan to introduce online facility soon. “Due to heavy traffic, many find it difficult to reach here. I think it is always better to select books from the library, but we are planning to introduce online cataloguing and home delivery this year,” he says.

Not unlike the other new-age library owners, Rao also says that more readers are opting for new authors and readers’ recommendations are considered while buying books. New books are added here every 2-3 days. Children’s books are about 30% of the collection, and there are plans to introduce activities, but not this year.

Radha Sameer, 34, a member of Eloor library, says, “It would be good to have activities like ‘Meet the author’. But I’m not very keen about online libraries, I like to feel books and select them. I manage to go to the library almost every day after work.” ⊕

With the city burgeoning and almost bursting, with the maximum growth in the years post 2000, it is a good time to take stock how we got here.

A reality check on the real estate in Namma Bengaluru.

Where will Bengaluru train its future Olympians?

Here are the training facilities available for school students in Bengaluru who are interested in athletics.