Day before yesterday, I was driving back home from work. At the Silk Board signal, the lights had turned green. I was crossing over, suddenly an auto rickshaw comes out of nowhere, cuts across, breaking all rules and I had to hit the breaks but couldn’t stop myself from hitting the auto rickshaw. 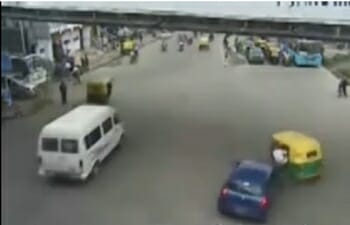 Still from promo film on road accidents, made by the Bangalore Traffic Police.

It was a minor hit. I have a Maruthi 800, my bumper got dislodged a bit and the auto rickshaw’s right mudguard had a dent.

I know many people who would just drive off. The incident shocked me and I stopped.

The Auto Rickshaw guy was rude, tried to tell me I had to pay for the damage etc. I told him I am not going to talk to him and that he should call a cop. The cop came, the auto rickshaw fellow told his tale in Kannada so I don’t know what he said. I told the cop my version. The cop tells me, I should pay him and compromise or he can go and file a "Hit and Run" case against me. I was surprised. I said, "here I am talking to you, how can it be a hit and run case and what about the fact that this guy actually broke the rules?" He said, unless I go to the closest Police Chowki, it will be filed as a Hit and Run. So I went. (I know you think I am a fool).

They said, "Pay him Rs 500 and go, or file a case." Of course, they told me that I could also file an FIR with my version of the story. But then I’d have to wait for 2-3 hours to have the inspector assess damage, might need to go to court etc… Basically asking me to take the easier way out.

It was disgusting, but I did take the easier way out. And I feel miserable about it.

All the way to the Chowki, I was telling myself, I’ll not bribe anyone, or pay for something that’s not even my fault. But in the end I did.

The incident I narrated takes place, in some form or the other, everyday in almost every city in India. And yet we just accept it as part of life. And move on. Shouldn’t such occurrences be prevented from happening?

I started to wonder, how little I am aware of, what my rights are, as a citizen, when faced with such a situation. Don’t I have any place to go where I can say that I have been coaxed by the law-keepers to bribe the auto rickshaw-walla? Isn’t it high time when we should be educating and making people aware of these rights.

We all talk of corruption and the need to end it. And that the responsibility to end corruption lies with each one of us. What we don’t do is arm the citizens with the weapons to fight this corrupt system. I guess, I need to be educated on my rights and so do many of us.

About Madhumita Deb 1 Article
The author has not yet added any personal or biographical info to her or his author profile.

GPS-enabled smartphone can be your best friend in crisis. It can send SOS messages and calls during crisis, and send your location details to your prime contacts – just with the help of an app.

As part of the Bengaluru Solutions Series, the second installment looks at private and government schools in Bengaluru. This piece looks at the shortcomings of state-sponsored education, and ways to improve the quality of affordable private education