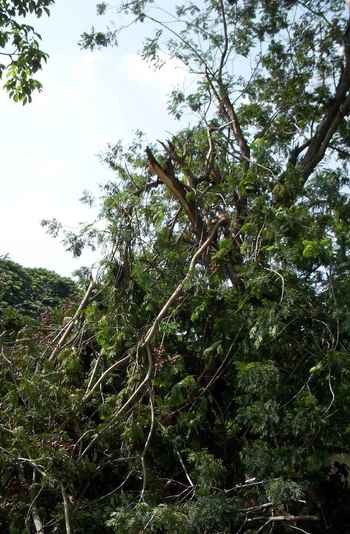 In addition to trees lost for road widening and infrastructure projects, why are we losing so many more?

Urban ecologist and scholar Harini Nagendra, 39, says that urban trees generally have shorter life spans due to stress; this combined with unscientific trimming of trees, cementing of pavements choking tree roots and pollution, cause trees to fall.

Harini is a researcher of growing repute. She is a co-author of papers with US-based political scientist Elinor Ostrom, Nobel prize winner for Economics in 2009.

"Trees become unstable if roots can’t grow deeper and extensively. Improper trimming of branches to prevent conflict with electricity lines buildings, tilts the balance of trees making them more vulnerable," she says. Trees also get punctured by nails and metal rods, which can lead to infection. Pollution restricts trees’ intake of water and metabolism, and causes leaves to fall early.

J Srinivasan, 61, a retired Koramangala-based entrepreneur, says that pruning should be done not only to save electricity lines, but the trees themselves too. "BBMP’s Forest Department does not heed citizens’ appeals to prune trees. Balanced pruning of excess height and overhang of branches is necessary to protect trees," he says.

But BBMP cannot do much about pruning problems as BESCOM is responsible for much of the improper pruning, says M Puttaswamy, Deputy Commissioner of Forests (South) in BBMP. Under his jurisdiction, which includes south, west, Bommanahalli and Rajarajeshwari Nagar zones, there are 11 teams to prune trees. All teams are given specific instructions and they have to get permission from the Tree Officer (South) to cut any tree, he says. In Puttaswamy’s jurisdiction, 75 trees fell during the last two months alone.

There is also the concern that pruning cannot be rushed. "The pruning that should be done over a year is done by BESCOM within a few months. As trees here are older and stronger they shift weight easily," Puttaswamy says.

A government order allows BESCOM to prune trees that interfere with electricity lines; BESCOM does not have to consult Forest Department officials for this. Puttaswamy says that BBMP cannot interfere in BESCOM’s functioning and that the only option is for BESCOM to appoint a Tree Officer to monitor pruning.

Speaking on behalf of Managing Director P Manivannan, BESCOM’s Public Relations Officer says that so far neither Forest Department officials nor citizens have advised it on the pruning issue. "We will seek Forest Department’s suggestion in the Co-ordination Committee meeting. Pruning is compulsory and our only alternative would be to lay underground cables, which are costly and need service ducts on either side of the road," says BESCOM’s PRO.

Vijay Babu S, in his early twenties and member of the NGO Sattva Welfare Association which surveys city trees, says that cutting of tree roots while laying utility lines is another issue. "Also, covering tree roots with cement prevents trees from absorbing nutrients," he says. Babu is an engineering college student.

Puttaswamy says that BBMP has already initiated action to remove the cement over tree roots. "BBMP’s Engineering department started work on this about a month back, and it is expected to be complete before monsoon, for the entire city. Digging land for utility lines weakens trees, but they have to be laid; what can be done about it?" he asks. ⊕

The risk of car theft is something most of us live with world over. Combating it appears to be getting easier with the cell phone technology based tracking solutions available. See what’s on offer.

Flay by the rules

From fixing potholes on a ward’s roads to pathways for the city’s parks and more, BBMP officials are breaking down contracts
into Rs.5 lakhs or lesser. A Banashankari citizen’s RTI applications helped trace a web of corruption. Sunil Tinani has more.

The function, held at Bhageerathi Auditorium, BNM College, was conducted by the male members of Jnanajyothi.