"I play with children with the confidence that even an hour of play will change their lives for the better", says Sheetal Suryavanshi, Founder President, and Managing Trustee, Aata Odanaata (AO). Sheetal founded AO along with her sports buddies to encourage socio-economically challenged children to learn and play different sports.

An awardee of CNN IBN-Reliance’s Real Heroes in sports category, Sheetal Suryavanshi was a sports enthusiast during her growing years. She represented her college in cricket, handball and baseball at the national level. When the vortex of life caught Sheetal in its grip, she found herself studying MBA (Human Resource Development) and then working in the corporate sector.

Even as she began climbing the corporate ladder, her true calling in life made her give up her work and start AO in November 2008. AO believes in nurturing sports and building bonds, says Sheetal.

Sheetal is also a BCCI (Board of Control for Cricket in India) Level A certified coach which indicates that she can coach teams at the state level. Citizen Matters caught up with her in a refreshment café in 4th Block, Jayanagar to find out what the reconnect with sports means to her.

Did you get a chance to play after you began working in the corporate sector?

Although I did not have much time for it, I always tried to associate with sports in whatever way I could.  With the objective to promote sports among disadvantaged children, I regularly visited an orphanage in Puttenahalli along with my friends where I played cricket with the children. In 2004, during one such session, I saw a small girl struggling to hold a ball in her hands. I learnt that the school where the girl studied did not have any provision for sports. This deeply affected me as I believe that it is the right of every child in the universe to be able to play. 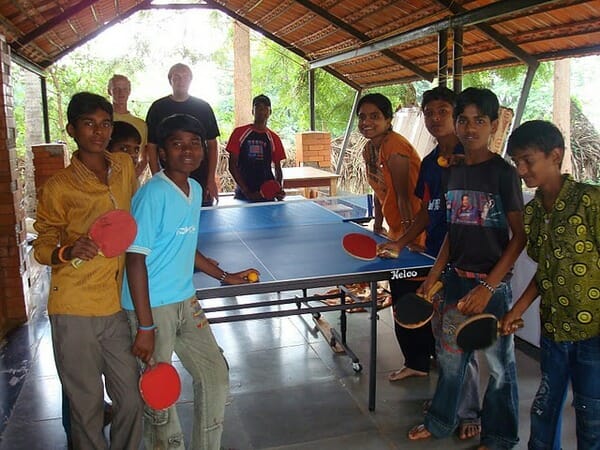 Is sports linked to the socio-economic condition of the children?

Sports should not be linked to our economic status but unfortunately this is a sad reality. Although children from poor families play with improvised sports accessories in the limited space that they can find, the hardships of families in the low income group does affect the playing of their children to an extent.

So how did you try to make a difference?

I began teaching different sports to children and youth from vulnerable backgrounds without charging a penny. Many a time, I would go to play grounds close to the residences of children from low income groups as they could save on time and money. At times, we would meet on a public playground and play.  We would play softball at National College, Jayanagar, football at National College Basavanagudi and table tennis at the Winners Choice Table Tennis Academy. It was great fun.

As I did not spend a paisa to play while I grew up, I strongly believed that no one should need to have money in order to be able to play. I don’t like to make money out of a passion and can’t imagine taking money from children for something that is their right.

What are Aata Odanaata’s activities?

We take the support of professional coaches to coach children from urban poor communities on scheduled days on different sports such as softball, table tennis, football, and cricket in different public fields and school playgrounds. We have organised sports camps and sporting events, including two events for autistic children in collaboration with Kilikili.

You had an accident in 2009 that affected your shoulder and then in 2010, you were diagnosed with osteoporosis, a bone degeneration condition. How has it changed your life?

My health condition does not permit me to work full time or take to sports full time but now I have accepted it. Sports has taught me not to give up on my dream and come to terms with my own vulnerabilities. It has made me realise the importance to make the most of what I have.

Does sports have any relevance on our lives?

Sports helps to neutralise our reaction to the ups and downs in life in many ways. For example, I feel that the confidence and self-esteem of children from poor families has increased after they got a chance to play in games of their choice.

In fact, sports have become more relevant now then ever. Sports is an outlet for negativity and channelises one’s energy in a positive manner. Sports help to develop concentration, build confidence, and discipline a person. Team sports build emotional bonds and improve the relationships at home and the work place.

How can the sports enthusiasts readers of Citizen Matters associate with Aata Odanaata?

If you wish to be an Aata Odanaata buddy, then you can play with the children, donate or volunteer your time as a coach, among other things. You can donate unused sports accessories if they are in a good condition. For example, old badminton nets, carrom boards, bats and balls of different sports, shoes etc. You can contact me at aata.odanaata@gmail.com⊕

About Uma Swamy 1 Article
Uma Swamy is a JP Nagar resident and columnist.

Tale of a backyard bird-rescue