Apart from being a huge building that houses artefacts and information, museums have a charm and a character of their own. Bengaluru has Venkatappa Art gallery, Visvesvaraya Industrial and Technological Museum, National Gallery of Modern Arts, HAL Aerospace museum among others. The recently inaugurated Kempegowda Museum presents interesting facets about Bengaluru’s founder.

The world famous Louvre or the British museum has the ability to transport one to different civilisations, discover treasure trove of information and of course get dazzled by the vast collection.

Museums in India house huge collection of artefacts; Delhi’s National Museum leading the list. Some of museums that I have enjoyed are the Mumbai’s ‘Coin museum’ and the Hyderabad’s Salar Jung.

While we instinctively associate museums as collections of art & history, there are also others such as the Dutch Research Centre for Science & Technology, Nemo, that thrives on interactive learning and the visitor has to touch, press, pull at anything; experiment and learn seems to be the motto.

Of course, our museums still follow the traditional pattern of exhibiting collections. Far from being interactive, one is reprimanded if he goes slightly near to read the text. Another irritating habit is the frequent whistling by the museums attendants to control the crowd!

Though the idea of creating a museum at Mayo hall was in everyone’s minds, the execution of idea only started when a samithi – Kempegowda Smaraka Vastu Sanghrahalaya and Adyayana Kendra – was founded in 2005 says the museum’s special officer and a member of the samithi, Prof DevaraKonda Reddy. The museum was finally opened on April 7th, 2011.

Interestingly the same venue was proposed to be housing a Bangalore Museum. ABIDe had put forward the recommendation to this effect which was accepted by the state government. V.Anand, spokesperson for Rajeev Chandrasekhar, MP, the convenor of ABIDe taskforce says "ABIDe built a case tabulating and registering heritage centres and pushed the idea of Bangalore Museum as a part of the city’s heritage initiative and including the same in PlanBengaluru2020 document- which was accepted by the Government." He adds however that there has been no progress in that direction.

Reddy, too says that the Kempegowda Museum has nothing to do with ABIDe’s recommendations. The Samithi’s other members are scholars and administrators such as Chiranjeev Singh, Raje Gowda, Shankaralinge Gowda and Jaware Gowda. The funding and maintenance is by BBMP, says Reddy. Currently there is no entry fee and it is open for all. 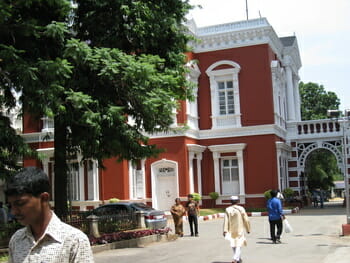 It is housed in Mayo Hall, the erstwhile Town hall for the city. The entrance is from a side and it has no boards or directions for a first time visitor. The building has been painted in the traditional Cantonment colours of red and white. As one enters, one can see the floor plan of the first floor’s photo gallery. The huge wooden stairs that lead to Kempegowda’s history has old paintings of Bangalore pete area and the nearby hill forts, made by British Surveyors. Many of them are not yet labelled.

On the first floor, there’s a huge poster picture of the popular image of Kempegowda, riding a horse. Dressed in attire similar to a Punjabi suit, it serves more to the populist image of Kempegowda rather than the attire of his time. In the centre of the wooden floored hall, stands a more accurate model of Kempegowda I, copied from his centuries old statue at Gangadeshwara temple in Shivagange. When questioned about the two very different depictions of Kempegowda I, Reddy said that the poster is to also depict the populist image of the founder. However I did not see any text anywhere that this is an inaccurate popular depiction.

Kempegowda I statue stands on a huge map of Bangalore and its nearby regions. Around him, there are huge photo and text panels of the family history and photos the regions around Bangalore that were under their rule, all directional to the map placed below. 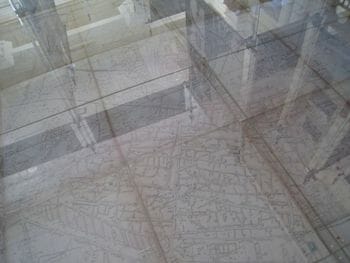 Standing on the map, if one walked north, one could learn more about Devanahalli and Yelahanka while west leads you to Magadi. Beyond these panels are the four towers that stand as citadels of Kempegowda II’s history.

The photos are awesome and the text is bilingual – in Kannada and English. Some nuggets of information from the panels about the Yelahanka dynasty

The entire concept was planned and implemented by Design Core, a design firm. I found it very interesting, especially about the life and times of the Yelahanka Nada Prabhus. 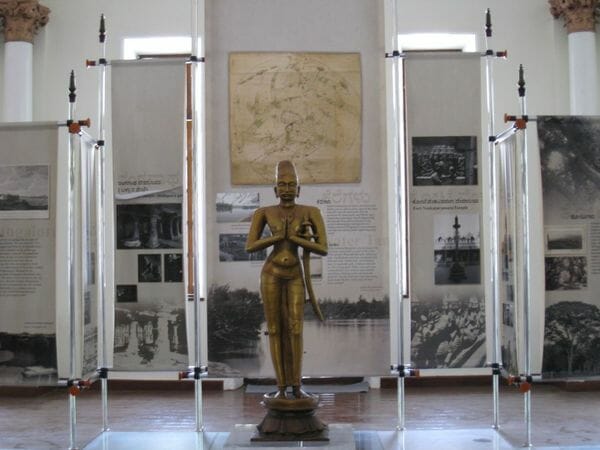 Kempegowda I statue at the photo gallery. Pic: Poornima Dasarathi

While I found the whole concept of walk and learn very interesting, I wasn’t sure about the usefulness of map on the floor. It is not proportional with the panels above and hence misses the point. Also the glass cover reflects light and hence the map is not that visible.

The maps depicted are post 1800s and are not labeled; a layman would definitely confuse the boundaries with the city during Kempegowda’s time.

Moreover, I was not clear whether this museum is dedicated to Kempegowda and his dynasty or represents the evolution of Bangalore. There are no other exhibits or artifacts.

Dr Aruni, Director of Southern Regional Centre, ICHR, voiced his concerns about authenticity of information detailed. He further stressed that historical verification and authentication has to be done before acquiring any antiquities.

Reddy explained that the museum is still in a work-in-progress state. The entire process of renovating the old building and creating the gallery was completed in sixty one days, he defended.

While the first floor will be dedicated to photo gallery since the antique wooden floor boards cannot hold heavy exhibits, he said the ground floor will be renovated for the storing the artefacts and inscriptions. Efforts are on to procure inscriptions, exhibits and material from private owners. In some cases where it cannot procure, it might make a replica for display, he added.

He further explained that though emphasis has been given to Kempegowda’s Bengaluru, the museum will cover the city’s history during later times also. Discussions are in progress and the next phase of the museum will be decided by the end of this month, he concluded.

Coming out of the heritage building that faces the huge metro on MG Road, the juxtaposition of the structures are very obvious. Kempegowda museum is definitely interesting as an art gallery; as a museum, it still has a long way to go.

The Bengaluru kids who went to TED

In a remarkable and inspirational development, school children from low-income families in Bengaluru shone at the recent TEDIndia conference at Mysore.

Last week Amitav Ghosh was here to launch his much acclaimed ‘ River of Smoke.’ Suja Sukumaran, an ardent fan, was there to meet him.