Ten apartments in Bellandur area have recently received show cause notices from the Karnataka State Pollution Control Board (KSPCB) for flouting STP (Sewage Treatment Plant) norms. The apartments, all of which were built by Sobha developers, are Sobha Carnation, Mayflower, Daisy, Jasmine, Dahlia, Lavender, Quartz, Aquamarine, Hibiscus and Primrose. They received notices in April.

Pollution Control Board authorities say that there is no specific drive to check on apartment STPs, but that surprise checks would continue. "Regional Officers (ROs) inspect apartments periodically and also if they receive complaints from the public. In this case, we came to know about these apartments by chance, during a visit to the Bellandur lake," says S M Puttabuddhi, Member Secretary, KSPCB. 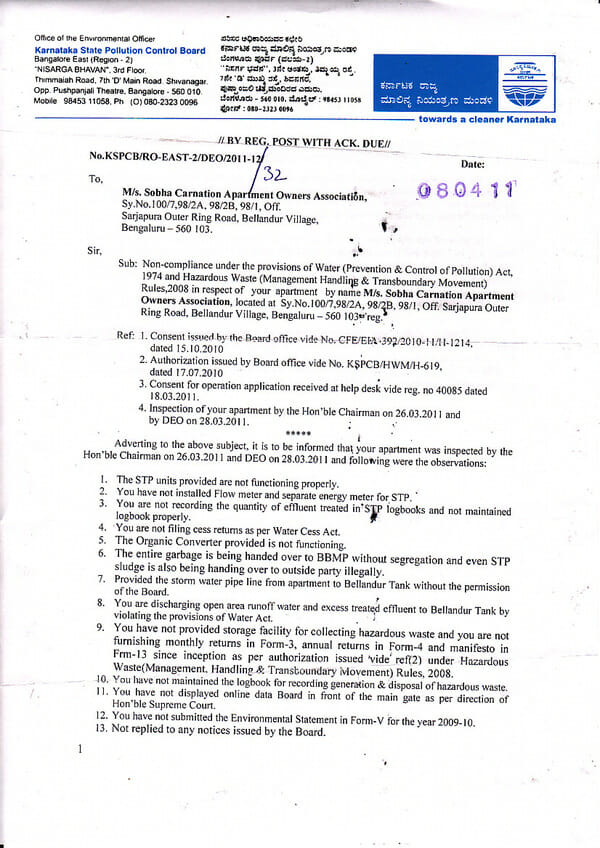 Though inspections are supposed to happen regularly, this is difficult due to shortage of staff; most inspections are done by ROs when they happen to visit an area, say officials.

While all 10 apartments did have STPs, part of the treated water was discharged to a nearby storm water drain, which joined Bellandur lake. "The quality of the discharged water was found to be lower than the set standards", says K M Lingaraju, Senior Environmental Officer at KSPCB. "They were using part of the treated water for flushing, gardening etc., but excess water was let into the lake, contaminating it. Hence we issued notices," he says.

Puttabuddhi of KSPBC says that water samples from all ten apartment STPs were collected individually and have been sent to the Central Pollution Control Board (CPCB) laboratory for testing. Notices were sent due to suspicion that the apartments were releasing untreated water and the analysis results are expected soon, he says. (KSPCB can send notices based on preliminary investigation, without samples analysis.)

The notices asked the apartment owners’ associations to show cause as to why the Board should not take action against it. Action as per Water (Prevention and Control of Pollution) Act, 1974, allows KSPCB to stop water and power supply to the apartments. Residents could be asked to vacate the apartments and criminal cases can be filed against associations.

Arindam Basu, a member of one of the Sobha apartment associations, says that all apartments are complying with the STP norms; the contamination was caused by a smaller apartment complex that was releasing untreated sewage into Sobha’s common treated water pipeline without residents’ knowledge.

KSPCB’s ‘actions’ appear to be on paper. Once the apartment owners respond to the notice, they will be given a chance for personal hearing with the Board. An action plan will be drawn out during the hearing with a deadline for the apartments for implementation.

In this case, all apartments have been given two months’ time for correcting deficiencies in the STPs and for finding better operators to do their Operation and Maintenance, says Lingaraju.

In the last one year, about 100 apartments in the city would have received show cause notices, says Lingaraju. These are mostly apartments in the newly added BBMP areas. Old BBMP (the original 100 wards) areas do not have many huge apartment projects that would come under the purview of the rules.

Your apartments needs an STP if..

* The apartment is an area with underground drainage
* The built-up area is more than 20,000 sq.m.

Which apartments should have STPs?

Most of the core areas in Bengaluru have a UGD (Under Ground Drain) system set up by BWSSB. Hence smaller apartments in these areas can directly let out their sewage into the UGD and do not require an STP. Only those apartments with built-up area greater than 20,000 sq mts need to have STPs, as per a 2010 rule.

The newly added BBMP areas however do not have the UGD system. These areas were with the erstwhile town municipal councils and panchayats before amalgamation into Bangalore in 2007-8. In these areas, apartments with area of 5,000 sq mts or having 50 units need to have STPs. Smaller buildings here usually have their own septic tanks. "The septic tank sewage joins streams and pollute the water", says Lingaraju. "UGDs should be provided in these areas too", he adds.

STPs were made mandatory for apartments in 2004 onwards, though large apartments in outskirts were supposed to have STPs even before this. Apartments also had to set up dual plumbing for reuse of treated water from STPs. Dual plumbing refers to a separate plumbing network that carries treated water from the STP back into the apartment/layout end user points for garden, landscape sprinklers, utility taps (car wash), etc. Dual plumbing systems should be set up during construction itself and most new apartments are using these systems, says Lingaraju.

While the 2004 rules were more stringent, the state government relaxed this in 2010. According to the 2004 rules, all apartments with built-up area more than 5,000 sq mts needed to have STPs, irrespective of UGD coverage. The government raised the limit to 20,000 sq.m in 2010, for apartments in UGD areas.

Even in old BBMP areas, only 50-60% of areas have UGD coverage, says Lingaraju. Apartments in core areas which do not have UGD coverage need to build STPs if their built-up area is 5,000 sq mts. This rule is still in force.

Currently, apartments that were constructed before 2004 are not sent notices as the rules at the time did not require them to have STPs. Most of these apartments are not problematic either as most of them are located in core areas which have UGD.

The process for STP approval

KSPCB sets the conditions for STP and dual plumbing for any builder at the time of obtaining a CFE (Consent For Establishment). CFE has to obtained from KSPCB before starting construction. Again, before occupation, a CFO (Consent for Operation) is needed. CFO is given only if STP has been set up, and this has to be renewed annually by paying a fee. Once the apartment owners’ association is formed, maintenance of STPs and obtaining consent becomes its responsibility.

Separate from STPs, apartment complexes occupying an area exceeding 20,000 sq.m are also required to get environment clearance from the Ministry of Environment, New Delhi. This is because they are categorised as RED, i.e most polluting industry. (The other categories are orange and green).

"The standards of water treatment are high and when treated at these standards, water is fit enough to be let into streams. But many apartments and industries do not follow the standards and it would be difficult to monitor all of them; hence they are not allowed to discharge treated water directly", says Lingaraju. But if there is excess water after re-use, apartments are allowed to let it out into drains.

Though rules mandate 100% reuse of treated water, it is nearly impossible to do this, says a KSPCB official on condition of anonymity. "Even after using the water for toilet flushing and car washing, some 30-40% of water will remain, which has to be discharged to drains. Other options for reuse are gardening and cooling air conditioners, but most apartments will not have enough scope for this," says the official.

A few days after receiving the notice, Nirav Dalal, resident of Sobha Carnation apartment, said that the owners’ association had already submitted responses to the questions raised by KSPCB. Association members were not available for further comment later. ⊕

RWH in a layout: What, how, why and how much

Part 3 of the series answers common but crucial questions related to RWH, and addresses the technicalities of direct storage and groundwater recharge.

It’s not revolutionary cinema from David Fincher, but The Social Network does manage to remain a gripping account on Silicon Valley start ups and the engine that is driving the global social media revolution.

Groups of people work with the local corporators, to manually clean the lake every weekend. What else is happening, in Bengaluru’s lake rejuvenation scene?