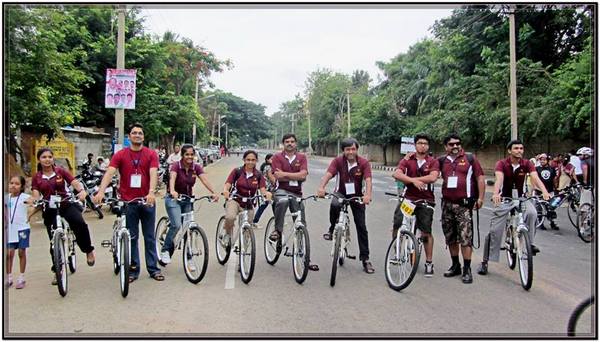 Directorate of Urban Land Transport (DULT), UDD, Government of Karnataka which is part of Bangalore Coalition for Open Streets (BCOS) along with local partner Yelahanka United Environment Association (YUVA) conducted the ‘Cycle Day’ event in Yelahanka New Town next to the Allalasandra lake.

The program was attended by over 3,000 local residents and cyclists from across Bangalore who enthusiastically participated in the cycle day event.

Cycle Day has been gaining in popularity and more and more participants are turning up with family and friends at such events. This goes to show the support that the public has for reclaiming the streets and going back to healthier lifestyle by cycling and indulging in traditional street games. The flavor of old Bangalore is being very well captured in these events when the roads and streets were congestion free and pedestrian friendly. We hope to continue this participation by signing up with more local partners to carry the message of Cycle day to their local communities.

The event could not have been conducted so seamlessly and effortlessly without the support and cooperation by Police – Traffic & Law and Order, BBMP. It is indeed very encouraging and heartening to see multiple public agencies and the general public coming together to create such a successful and family friendly event.

The Cycle Day is a car-free event where few kilometers of roads are blocked to motor traffic to create a safe and festive zone for people to just come out and try cycling as well as engage in sport, fitness, or community building activities. An idea box was also provided for participants to provide feedback on how they would like to make Bengaluru more active and pedestrian and cyclist friendly. By putting cyclist and pedestrians first, the campaign seeks to change the prevailing mindset that roads are meant primarily for cars. We want people to re-boot their relationship with streets to ensure that all users, particularly pedestrians and cyclists, have an equal claim to road space and the right to use streets safely. At the same time the campaign aims to provide our government partners with the public support and impetus needed to create an enabling environment for cyclists through the planning and development of better roads, cycle tracks and lanes, cycle rental schemes, city-wide cycle parking stands and other infrastructure.

This content was sent by Samhita Rajashekar on behalf of Directorate of Urban Land Transport and Bangalore Coalition for Open Streets, and published on Citizen Matters in the Message Forward section meant for publishing public service messages from individuals and non-profits.

Monsoon is a good time to get inspired to do vegetable gardening. Get some inspiration this weekend, from 8th edition of the Oota From Your Thota!

Bengaluru is a city of opportunities: Sadananda Maiya

Sadananda Maiya, the former owner of MTR Foods, who also established another food chain Maiyas, writes about Bengaluru. On the day of Kannada Rajyotsava, he describes the accommodating nature of the city.

Legalising street vending in Bengaluru is still a long shot, and there are many things that the BBMP needs to do. What are they?