When one looks at the history of cinema, Hollywood has excelled above others in its creation of the period film. So there was much expectation from director Francis Lawrence’s Water for Elephants, with a cast that included Reese Witherspoon, Robert Pattinson and Christopher Waltz. 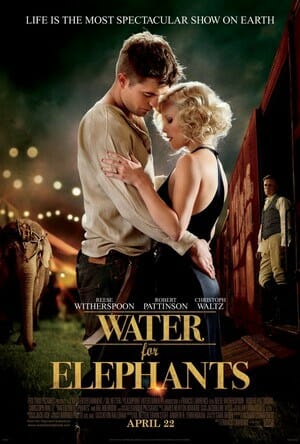 Set against the Great Depression, the film is based on a historical novel written by Sarah Gruen. It tells the story of Jacob Jankowski, a young veterinary student at Cornell, whose life changes dramatically in the face of personal tragedy. He joins the travelling circus troupe of the The Benzini Brothers, where his life gets hopelessly entangled in a dangerous triangle, always connecting his life to the troupe’s owner August Rosenbluth and his wife Marlena Rosenbluth. Meanwhile an unusual friendship is also forming between him and the elephant Rosie, The Benzini Brothers’ new star crowd attraction with a mind of her own.

While Water for Elephants begins promisingly, and draws you in, it concludes predictably and leaves you wanting more. The failure of the conclusion to live up to the promise and complexity of the rest of the story leaves you with cinema that absorbs but does not haunt you.

As a period film set against the landscape of a circus, much is expected from the art direction of this Hollywood big budget film. But Water for Elephants is at most times adequate, never outstanding.

It’s also an attempt to create different kind of cinema from Francis Lawrence, who was best known before this for films like Constantine and I am Legend. Lawrence seems out of depth with the more complex shades that make Water for Elephants an unusual story.

But these shortcomings are slightly redeemed by some outstanding performances. Above all else Christopher Waltz shines in his portrayal of August Rosenbluth, always the brilliant entrepreneur destroyed only by the demons within. Reese Witherspoon and Robert Pattinson hold their own, and add both romance and lightness to the film’s otherwise brooding darkness.

Yet the film does nothing different from Hollywood productions under the same genre that have gone before it. So I would go with the rating of 2.5 for this film and a recommendation of a good "one-time watch" at the movies. But I’m still waiting for that one great Hollywood period film that in traditions of yore will rock my world.

The ratings and what they mean
The ratings are on a scale of 1 to 5 and try to strike that difficult balance between cinematic critique and giving the regular film buff a peek into what’s playing in town and worth a watch.

Three communities in Bengaluru are proving that sustainable water management in urban India is possible. They have eliminated borewells and tankers from the equation!

Murphy Town Market may be joining the list of over 800 heritage structures in Bengaluru. The BBMP has dropped its plan to renovate the old market, saying the structure is solid.

Manufacturers are responsible for packaging too

A small effort is starting to push manufacturers to keep recycling in mind while packaging their products. And consumers can help too.