There’s something about living in this city for a long time that makes it impossible to not be a loud and brash bigot. There is a wordless demand that you don’t simply love this city but be a little proud, a little overbearing, and become an insufferable little mobile advertisement for your part of town.

It is with the same sentiment that we took part in Hunt For The Past – INTACHís Heritage Hunt held in the Basavanagudi area last week. The event was an sms-powered treasure hunt that took one to different parts of the old South Bangalore area, looking for clues.

I was tagging along with Supreeth, another proud South Bangalore child – a Basavanagudi huduga who happily waited at the Gavipuram starting point at 8 a.m on a Saturday morning like it does not require superhuman effort. I contributed in my own small way: ambling in at around 9 am, having given up on the ancient, sacred privilege Bangalorean techies were granted by the gods – weekend sleep. Anything for South Bangalore.

Do you know where Vivekananda’s statue is in Basavanagudi? Pic: Siri Srinivas

We walked all over Basavanagudi, looking for clues, quotes, name boards and on occasion gaped at the towering Vivekananda statue opposite Ramakrishna Ashram.

It took only asking a random but friendly passerby where Masti (Venkatesh Iyengar, Jnanpeetha award winning Kannada literary giant) ís house was to find it. Basavangudi will remain old-worldly and charming in spite of the best efforts of multiple international fast-food chains.

The sms clues, nudged us to walk all the way near Krishna Rao Park to the Basavanagudi Boys School. We sat down in silence for a few minutes, mulling and mourning the atrocity that is the Tagore Circle Underpass. We exchanged a few theories on how Bangaloreís urban planning initiatives of the last five years seemed like their only motivation was to find and mutilate the most beautiful areas of Bangalore. No really, take a map and trace the Metro route if you don’t believe me.

Basavanagudi was home to some of Karnataka’s greatest poets, thinkers and intellectuals. And this little park opposite the Basavangudi High School, Supreeth informs me, was where stalwarts like T P Kailasam, D V Gundappa met to discuss their revolutionary ideas with contemporaries and exchange banter. 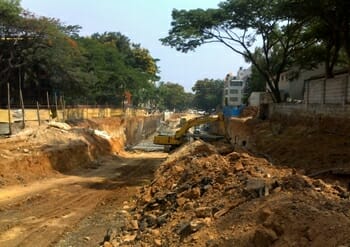 The sms clues sent us off running towards Bugle Rock where the stone busts of literary giants looked at us with kind eyes. Resisting the lure of Vidyarthi Bhavan dosas, we trudged nobly towards the Basavanagudi Co-operative complex for our last clue at the foot of what was supposedly the only Gandhi statue in Gandhi Bazaarî. From there we hurried back to the starting point to be told, to our feigned surprise, that we had won.

Naresh Bharadwaj, one of the people behind the startup Meeva Technologies that designed the treasure hunt is a long time Basavanagudi resident himself. We marveled at how walking around these roads on a sunny Saturday morning can be a serendipitous re-introduction to places we’ve already known.

Basavanagudi continues to be home as we know it; its people, however, do little to resist change.

Last month, Koramangala residents got a stay on signal free corridor work. Now BDA has filed its objections in court.

Four months after launch, bike ambulances in Bengaluru attend to a dozen calls a day

Bike ambulances were introduced in Bengaluru to ensure that victims of accidents or other emergencies got timely medical help. Since April, these ambulances have responded to over 700 calls in the city.