The famed Jayanagar Shopping Complex in Jayanagar 4th block is soon to undergo a makeover. While BBMP and BDA have been making plans for renovating the complex, shopkeepers here have been kept out of the loop.

The Detailed Project Report (DPR) for the renovation project is almost complete, but it does not mention rehabilitation of shopkeepers.

Many shopkeepers are not aware of the renovation plan either. While some are opposed to the project, others believe that they will be rehabilitated. The project costing Rs 115 crores, is expected to be complete in 18 months.

Mani, a shop owner, has been doing business here for the last 36 years, ever since the complex was set up. When asked about the renovation, he was not the least worried. 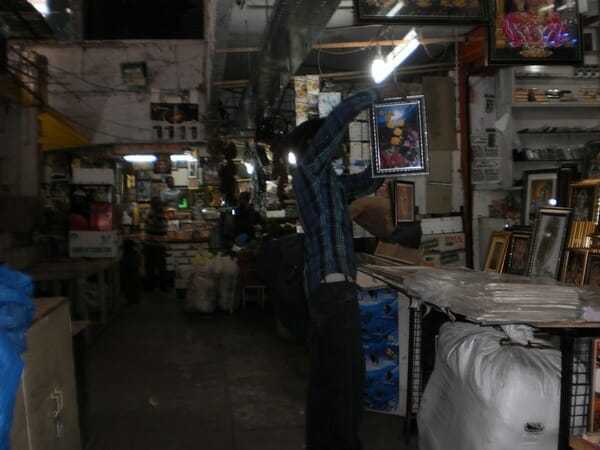 BBMP started pushing for renovation of the complex after a major fire broke out here in June 2008. Pic: Navya P K

“If the complex is renovated, it will be better for our business. We were assured by local MLA Vijayakumar that we will be relocated during the construction and allotted space later,” he says.

BBMP, BDA and the MLA have been spouting such assurances during the last month, but officials have not held any meetings with them yet or sent them any notices.

BBMP and BDA have already signed an MoU on the project. According to this, BDA is responsible for the construction and associated cost. Though BBMP owns the complex and collects rent from tenants currently.

The DPR, being prepared by BDA, does not mention any plans for rehabilitation as BDA’s responsibility ends with construction, says a BDA official on condition of anonymity. Tender for the project will be floated as soon as the DPR is complete, he says.

BBMP has been planning renovation since June 2008, when a fire broke out in the complex. The plans were on hold due to resistance of shop owners who feared their livelihood would be affected.

MLA Vijayakumar says, “There has been resistance before, but this time we will speak to the shop owners and allot them space temporarily during the renovation. Once the work is complete, all shop owners will be allotted space.”

Surendra, a vegetable vendor in the complex, worries he will be forced to move out during renovation. Pic Navya P K

N Narasimha Raju, Vice President of Jayanagar Shopping Complex Association, says, “Within the complex there are 150 shop keepers, with 4-5 workers in each shop. If we are given alternate space, we will consider moving out. But where is the space for that?” he asks.

For now, the plan is to renovate the Puttanna Kanagal theatre in the complex first and accommodate original shop owners there temporarily, until the entire complex is renovated. But no one has yet taken stock of the number of owners or confirmed whether all of them can be accommodated in the theatre itself. Narasimha Raju says that the theatre is too small to accommodate all shops.

Even if relocation plans exist, only original shop owners will benefit from it. “There are owners who have 3-4 shops in their names and have rented it out to others, while they are supposed to own only one shop. These additional shops will not be given space. Finally only about 50% of us may be relocated,” says Patil, who runs a Nandini outlet in Janta Bazaar, in the complex. Janata Bazaar will also be renovated under the project.

There are also many vendors who do not own shops, but have been doing business for years around the complex. Surendra, a vegetable vendor here for the last 30 years, is worried that he would be forced to move out. “I am not part of the Shopping Complex Association. I will have to set shop elsewhere and start from scratch,” he says.

Narasimha Raju says that the Shopping Complex Association is yet to take a decision on the issue.

Meanwhile, BBMP shirks responsibility saying that it has transferred the project to BDA. When asked about the number of shop owners, Deputy Commissioner (Markets) B S Purushothama said that details are available with the Jayanagar BBMP officials and not with him.

“We had written to the BBMP Commissioner for information on the shop keepers, but we have not received it yet,” says the BDA official.

According to the MoU, BDA will recover cost of construction by collecting rent from tenants after the project is complete. Once the cost is recovered, rent collection will be taken over by BBMP.

Just for the poor: a trickle of water, that too contaminated

Bengaluru now gets 1400 million litres of Cauvery water daily, but hardly any of this reaches the poor, though they are ready to pay. Slum dwellers wait for hours for the water to come, or spend hefty amounts to buy it.

Construction is expected to resume soon, as the land acquisition is complete. However, people who lost land to the flyover are yet to receive compensation.