Bangalore footballers are going to be a happy lot soon. The International Federation of Association Football (FIFA) has honoured the Karnataka State Football Association (KSFA) with an Astroturf.

City’s football stadium in Ashok Nagar, is only one of three cities in India with astroturf surfaces, the other two being Kolkata and Mumbai. Those surfaces were also funded by FIFA.

"FIFA has recognised KSFA’s contribution towards football," says Amjad Khan, Deputy General Secretary of the KSFA and a former coach at the international level. "We have to make good use of the Astroturf and maintain it well, now that we have it," he adds 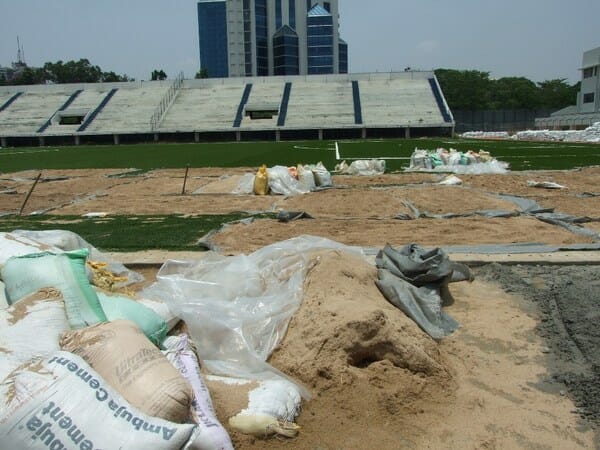 Astroturf is a preferred surface worldwide because it is far more durable than natural surfaces. This helps especially for tournaments with several weeks of continuous matches. It also requires minimum watering.

The inauguration of the Astroturf surface, which was supposed to take place on May 7, is now postponed to the end of May due to untimely rains, says the KSFA. Kushal Das, Secretary of the All India Football Federation, is scheduled to cut the ribbon, followed by an exhibition match by football veterans.

Khan notes that credit for bringing Bangalore an Astroturf surface goes to A R Khaleel, President of the KSFA. Khaleel’s position as the Chairman of Finance of AIFF also helped, he says. In another two months time, through his efforts, a Football Academy with a Rs.4 crore budget will also be launched, in all probability by Chief Minister B S Yedayurappa.

KSFA has won the Santosh Trophy – the topmost tournament of the country – four times and produced four runners up as well. Along with this, it has secured the top place in the under-19 three times and under-16 twice. Several champions have made it to the Olympics in London, Helsinki and Melbourne.

RWAs in Bannerghatta road came together to launch their own portal. They also shared information on issues like RWA registrations and solid waste management.

What can Bengaluru expect from BBMP’s 14.4-crore plan to send pourakarmikas to Singapore?

More than 500 pourakarmikas have already visited Singapore at a cost of Rs 80000 each, as part of BBMP’s plan to send a targeted 1800 waste workers for training and international exposure. But what have they brought back and how much of it is being implemented?

On the map, one can see Kadugodi’s Sai Garden apartment complex right next to the path of a natural drain. The apartment is prone to flooding and residents need a quick and sustainable solution.