Seven months after their first ‘Gandhigiri’ protest, residents of Sachidananda Nagara layout in Rajarajeshwari Nagar held a second protest at the BBMP Commissioner’s office on 25th April for the same reason – non-issuance of Khatas. In September last year, a group formed by residents named Sachidananda Nagara Nyayapara Andolana (SNNA) had presented roses to the Commissioner saying that they should be provided khatas without having to give bribes.

But despite an order from the Commissioner in November, only 120 residents have got khatas so far. There are nearly 800 residents in the layout. Another set of 120 khata applications have been pending before the Additional Commissioner (RR Nagar) for the last four months. Around 45 residents had submitted building plans for approval in the last four months, which were also not sanctioned by BBMP officials. 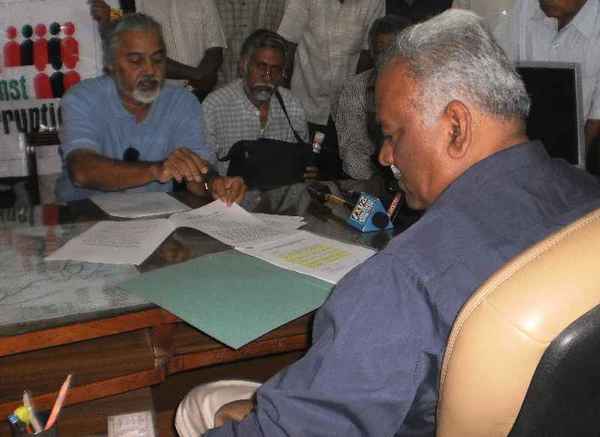 "About 48 days back we re-submitted our plan approval applications together. Ideally it should be approved within 3 days, but no application has been approved yet," says Dr Shankar Prasad, who has been leading the campaign. Town Planning officials had refused to sanction the plans saying that the khatas themselves may not be valid and that they have to be re-checked.

"On 25th, before we came to the Commissioner’s office, RR Nagar AC K M Ramachandrappa called us to inform that some khatas were ready – they processed 65 khatas over the weekend," says Prasad.

However, residents met the Commissioner with their other demands – to suspend and replace the Assistant Revenue Officer R Revanna and Revenue Inspector Changalrayappa for refusing to give out the khatas, the pending khatas and plan sanctions to be approved within 48 and 72 hours respectively to anyone who applies in future, and to not entertain any claimant to the property other than members of Vishwabharathi Housing Society, which had allotted the plots. About 50 residents met the Commissioner, presenting roses to him.

Ganapathi Bhat, 70, who had bought a plot in the layout in 2002, says, "I was part of the earlier protests and got the khata last November only. When I submitted the building plan for approval, the officials did not point out any flaw in the plan itself, but questioned the validity of the khata. The issue of khata was solved when the Commissioner gave the order earlier, so there is no point in checking that again."

But RR Nagar MLA M Srinivas has not been supporting the campaign. Instead, he had decided to hold a dharna in front of Prasad’s house on 25th, claiming that Prasad had defamed him by giving false information to a city newspaper; but on Monday said that he would not go ahead with the plan. There has been no action from the MLA since then. Prasad, on his part, did not respond to the MLA; nor are residents planning to get his support.

By Tuesday, RR Nagar officials informed the residents that all khatas have been processed and residents can collect them, and that building plans are being processed. "As usual, we will go the RR Nagar office together and collect the khatas and plan sanctions," says Prasad. ⊕

Hop on and hop off in Bangalore, courtesy BMTC

Public transport in the central business district of Bengaluru, as well as along the big 10 arterial roads is likely to improve soon.

Here’s how you can help the Bengaluru police manage traffic

Two days ago, City Police Commissioner Bhaskar Rao announced that the number of traffic wardens would be increased to 2500. Here’s how you too can apply to be a traffic warden and help manage Bengaluru’s chaotic roads