It has taken just about 2 months to flood National Games Village (NGV) after the initial protest on 25th February from the residents for opening up the storm water drains. The trauma has just started with the first few summer showers. We had water overflow from the drains reach areas near the centre court in Tungabhadra, NGV on 22 April. 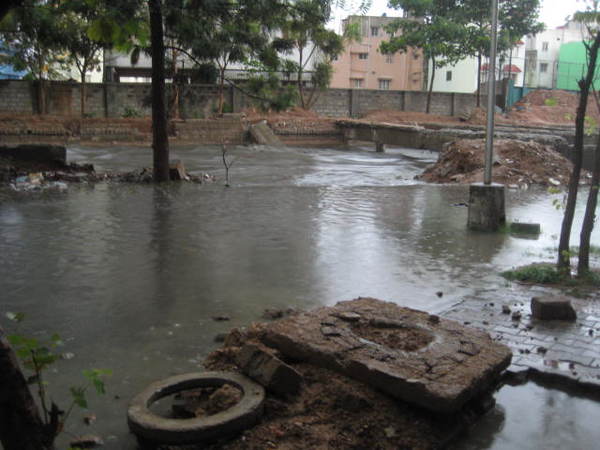 There was no way to cross between the towers without stepping into the dirty water from the drain! BBMP had earlier taken an on the spot decision to open up the drains. The drains are opened up completely inspite of several protests and requests from NGV.

If this continues, very soon NGV residents would have to have days without safe water. Who is responsible to ensure the health and safety of residents are considered while making hasty decisions ? The water in the drain reached alarming levels at areas where there is no wall. If two hours of rain can play havoc during summer, what would be the situation when the monsoon commences?

Residents protesting opening up of drains by BBMP on 25 February. Pic: Meera Rajesh

Residents of NGV has surely got a reminder on the carelessness of BBMP officials on such grave matters involving people’s well being. ⊕

About Meera Rajesh 1 Article
The author has not yet added any personal or biographical info to her or his author profile.

All you need to know about Ward 150 – Bellandur

What were the works done in Bellandur ward in the last five years? How much money was spent? What are the issues troubling the residents?

Do Cubbon Park and Lalbagh need Wi-Fi? Visitors say no!

A survey of visitors to Cubbon Park on whether they wanted Wi-Fi found that they’d rather not… Some of them even wanted cell phone jammers instead!

16 things to get right with Bengaluru’s public transportation

How can the humble bus or the local train be made attractive to Bengalureans? From ensuring seats to creating apps, a lot needs to be done for this. Here are some pointers