Even after winning a court case against the builder for misappropriation of open spaces in their layout, residents of Reliaable Tranquil layout near HSR layout, off Haralur Road, are a long way away from getting any justice. Residents had found that a park and a Civic Amenity (CA) site, which were originally part of the layout plan, was actually someone else’s property. Reliaable Developers (RD) is the builder of the layout, with offices at Museum Road, Bengaluru. (Civic Amenity sites as per town planning rules are meant for public utilities like banks or recreation centres, and are open to public) 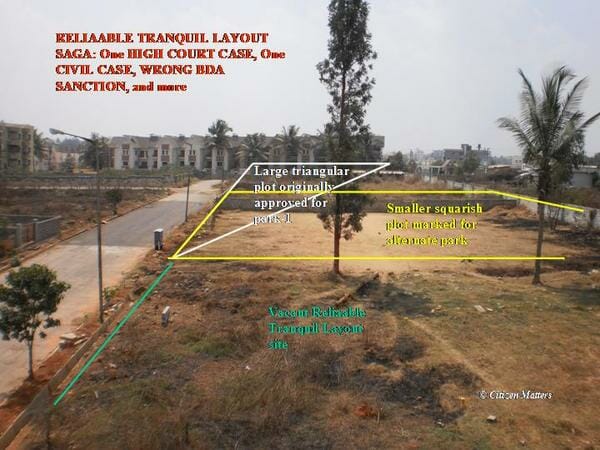 View of the layout where a larger triangular shaped park is now being substituted with a smaller park. Pic: Navya P K.

There are 116 sites in the layout, all of which have been sold already. While 13 owners have already built houses and occupied them, and two are now building houses, most owners are stalling due to the legal issues here. Also the builder has not yet provided facilities like BWSSB water supply, street lights or STP. Most residents are IT professionals. "On average there are two children per house. It is difficult to go on without basic facilities. Also, we have spent enough time and effort pursuing the land misappropriation case," say residents. 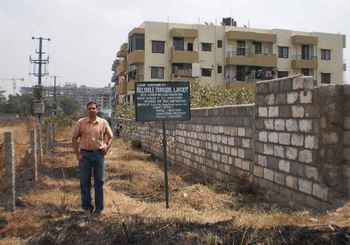 Muralidhar Indraganti of the Reliaable Tranquil Layout standing on the part that remains of the originally approved civic amenity site now; the rest is beyond the compound wall and is occupied by actual owners of that plot. Pic: Navya P K

Residents started occupying the layout in 2007. Soon they found that apartments were being constructed in the sites marked for CA. Through RTI, they found that one park (park-1) and the CA site did not belong to the builder RD. After repeated representation by residents, BDA sent a notice to RD. RD submitted an alternate plan to compensate for the sites in 2008, but BDA did not take any further action to approve it. Reliable Tranquil Layout Site Owners Association finally filed a case against BDA and RD in High Court of Karnataka in 2010 asking for lost sites to be restored.

2004 – Reliable Tranquil Layout plan sanctioned by BDA
2006 – Reliaable Developers (RD) starts selling sites
2007 – Residents start occupying the layout and find out about land misappropriation. A park and CA site were shown in the original plan to belong in survey nos. 100/1 and 99/1; but they in fact came under survey nos. 100/2 and 206, which did not belong to RD
2008 – Residents complain to BDA; RD submits alternate plan for BDA approval since part of 100/2 is now in its possession; BDA does not approve
2009 – Litigation on the park site in 100/2 starts between RD and third party; it is still on
2010 – Residents file case in High Court against BDA and RD
2010 – RD asks High Court to approve alternative plan using compensatory land; even as that land is stuck in a different litigation. High Court is not made aware of that
Feb 2011 – High Court orders implementation of compensatory park plan in favour of residents; but order not implemented yet
Mar 2011 – BDA’s Narayan Gowda tells Citizen Matters that the authority can approve RD’s alternative plan despite the case in the city civil court.

In February 2011, HC ordered that the lost sites should be compensated with new sites of the same proportions, in line with RD’s draft plan. The problem now is that this draft plan does not compensate for the entire area that was lost. Also the site proposed for building the new park is itself under litigation between RD and a Koramangala-based individual who requested that he not be named. Nearly two months after the court order, BDA has not approved RD’s ‘alternate’ plan.

Layout residents, meanwhile, are waiting. "The new plan violates BDA norms as the CA site, which is mandatory, is removed from the new plan; it cannot be sanctioned. But since BDA has told the court that it can be approved, we are waiting for BDA to act, and challenge it later," says Muralidhar Indraganti, Secretary of the Reliable Tranquil Layout Site Owners Association and a software professional.

How the original plan was sanctioned 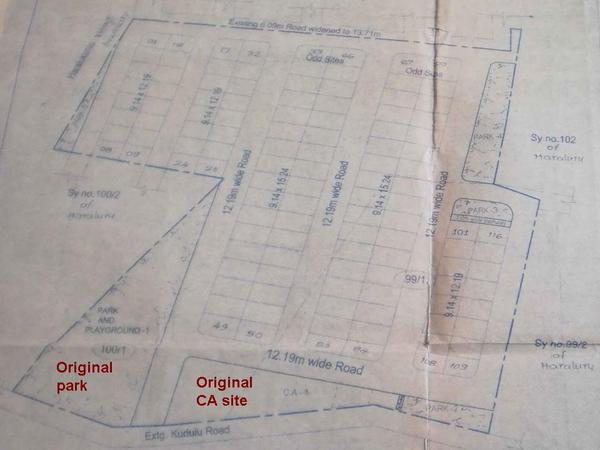 The original BDA approval for layout itself has come under a cloud. There are major discrepancies in the plan that was sanctioned by the BDA in 2004 and the actual layout. According to this, the layout should have five park sites and one CA site. Park-1 (the first park) and the CA site were actually located in survey numbers 100/2 and 206 respectively, which did not belong to RD. But in the plan, RD showed these sites as part of survey numbers 100/1 and 99/1, which belongs to it.

RD now attributes this to ‘survey error’. "We had many projects at the time. Our engineers and surveyors might have made a mistake; it happens," says V Kiran, Managing Partner at RD.

Indraganti asks, "BDA sanctions layout plans only after inspecting and surveying the property. Encroaching land for even a few inches is usually impossible; how did BDA sanction the plan when so many acres of land were not owned by RD?"

BDA and RD have different answers to this. Kiran says that BDA did not conduct any surveys before approving the land. But Narayan Gowda, Joint Director (Town Planning) at BDA, says that the survey was done, but BDA’s surveyors had made the same error as RD.

Anyway, BDA officials seem ready to give a free pass to RD. Assistant Executive Engineer (BDA East) Vinay Kumar, who was dealing with the case, says that no action was taken against RD for submitting the flawed plan originally as they did not actually benefit from it. "The builder did not make profits by increasing the number of residential sites. He was ready to submit an alternate plan to compensate," he says.

Residents say that the park and CA site are meant for public use and the builder is supposed to relinquish it to BDA. "The relinquishment deed between BDA and RD is for all five parks and CA. It is not only for residents’ use, but for public too," says Indraganti.

High Court rules in favour of residents, but…

When residents filed the court case, RD did not attend the first hearing. In August 2010, court ordered BDA to put up notices in all open spaces in the layout prohibiting any construction.

This order was not followed by BDA. "How could we do that? The disputed sites belong to someone else. We cannot put notices in their property," says Vinay Kumar. Soon RD filed an affidavit in the court requesting recall of the first order. It said that the company could not attend the first hearing as they were moving to a new office at the time and had misplaced the documents of the case.

The court granted reopening of the case. In the second hearing, RD submitted the alternate plan again to the court and promised to develop parks in the new sites. That is when the HC ordered BDA to approve the alternative plan according to its norms.

The alternative plan with compensatory provisions, that Reliaable Developers submitted to the High Court.

In new plan, the area sanctioned for park-1 is lesser than that shown in the original plan.

Kiran says that this is because there were problems in the drawing of the plan itself. "The actual total area of the layout is 7 acres 15 guntas. But in the plan drawing, the total area of the layout was taken as higher – about 8 acres – and hence the area sanctioned for parks was higher. In the new plan, this error will be corrected, so the park’s area will be smaller," says Kiran.

Though RD had mentioned this during the hearing, HC had still ordered that the area should not be reduced during modification. BDA says that its surveyors will re-survey the land to ensure that both sites are of the same area.

Also, the CA site as approved in 2004, is no more. Most of it has been removed from the alternative plan; the small portion that remains would be made into a park. Narayan Gowda says that CA sites are not mandatory in layouts according to current CDP (Comprehensive Development Plan). But when the plan was sanctioned, 1995-CDP was in place, according to which CA sites were mandatory, Gowda confirms this.

"The rules that existed at the time of sanction would be relevant. Relinquishment deed and Work Order were all executed according to the earlier CDP," says Indraganti. RD has adjusted for the CA site by increasing the area of roads. What was about 30% road area in the original plan, is now 35%; the 4.5% area meant for the CA site is adjusted for roads. "Residents should be happy that they are getting more roads for themselves," rebuts Kiran.

Even if BDA approves the current plan, implementation is suspect as there is another litigation on the proposed park site. An altogether different case has been going on in the City Civil and Sessions Court since 2009. The petitioner in this case had made a sale agreement in 2006 to buy some land – which includes the very same land on which RD’s proposed BDA park site is – from RD! But RD then sold the land to another person later. While the petitioner says that RD violated the agreement to sell the land to him and did not reimburse the advance he paid, RD denies this and claims that the agreement was cancelled formally.

Neither RD not the BDA had informed the High Court about this case; BDA in fact presented a sale deed made in 2007 to the court to show proof of RD’s ownership of the land, when residents demanded it. "Since BDA had submitted the sale deed on the day of the judgement itself, we did not have the documents to contest it," says Indraganti. Narayan Gowda says that BDA has taken legal opinion which says that RD alternative park can be approved despite the ongoing case in the city civil court.

Kiran says that RD has provided all facilities to residents as per the Work Order and their claims are mostly baseless. About facilities in the layout, he says that RD had never committed to providing BWSSB water supply and that other facilities were provided on time. The sewage has been channeled to BWSSB’s sewage line and a septic tank has been built, he says.

"The builder does not have any interest in the case as all sites have been sold out already. If BDA does not act soon, we may have to file a contempt case," say frustrated residents. ⊕

What does it mean when the candidate running for a relatively new party comes within 1200 votes of the oldest political party in India? There was more to this race than who won or lost.

This week’s scan of Kannada newspapers have a number of reports on the elections to India’s Ajlan Shan hockey championship victory.