Residents of Dollars Colony in J P Nagar 4th phase are complaining of increasing traffic jams at the 8th main road-2nd cross intersection. The cause they say is the M K Ahmed super market located at the intersection. 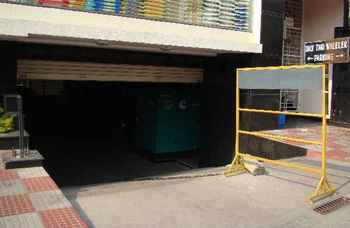 K V R Somayaji, at IT consultant in his fifties, who lives opposite the store on 2nd cross says that the store is not allowing car parking in the basement, leading to customers parking on busy 8th Main. A city no-parking sign prohibits parking of vehicles for 200 feet along 8th main.

The BBMP plan sanction approved for the building shows parking of seven cars, and "it shall not be used for any other purpose", notes Somayaji. D Nisar Ahmed is the owner of the building. A copy of the BBMP-approved plan, obtained through Right to Information (RTI) Act was provided to Citizen Matters by Somayaji.

"We have restricted parking to two-wheelers in the basement only because there is not enough space for four-wheelers to be parked. We also request customers to not park along 8th main," says K Sadiq, Manager of the M K Ahmed store. For his part, Nisar Ahmed, owner of the building put the ball back in the store’s court by saying that the basement is for the use of everyone in the building and he has not restricted car parking.

When Citizen Matters visited the store (three occasions), signs restricted posted by the store restricted parking to only two-wheelers, however, there were no traffic jams at that time.

The swanky looking building housing the supermarket is in Dollars Colony, J P Nagar, one block away from the Delmia intersection. Pic: YM.

The matter has gotten further complicated when citizens unearthed additional building violations. While the plan sanction is for a ground plus two storey structure, the owner has built an extra floor. The JP Nagar Fourth Phase Dollars Colony Residents’ Welfare Association,

through RTI also found out that Nisar Ahmed had not obtained the Completion Certificate and Occupancy Certificate (OC) for the building. The OC is mandatory for obtaining electricity and water connections. A copy of BBMP’s RTI response stating this is with Citizen Matters.

M K Ahmed Store manager Sadiq points ut that they are only the tenants and are not responsible for any violations. Nisar Ahmed denies committing any plan violations.

BBMP’s JP Nagar Assistant Executive Engineer K Venkatesh could not be reached for comment. "I get hundreds of complaints like this", says Ananth Swamy, his superior, Executive Engineer (South). He asked Citizen Matters for an SMS with the full address of the building, adding that he was going to look into the violations. ⊕

Residents partner with BBMP to save a lake

The Puttenahalli Lake was on its way to being encroached until a year and half ago. The joint effort of a few local residents has now put it on the revival map.

Garbage burning can cause cancer, should be banned: Doctors

With leaf litter often set on fire by the roadsides, along with other trash, Bengalureans are getting affected. Children are most vulnerable, and toxins released during burning garbage affect lungs, according to experts.

National Green Tribunal has allowed the developer to construct the residential project, after the developer modified the project plan by reducing the extent of construction.