It was a lazy Sunday afternoon on 6th July when I was surfing through my scrap book on my Orkut profile and saw it. ‘International Yezdi / Jawa Day- 13th July 2008. Interested people may meet at 7.00 AM in Cubbon Park, for a joint ride to Café Cofee Day at Channapattna on Mysore Road’.

It may sound silly but in reality, for the next six nights, I frequently dreamt of the ride. I saw myself on Mysore road riding my bike on various turns and different speeds. Every morning, I woke up with disbelief regarding my own subconscious excitement about it.

You can take a man out of the bike, but you can’t take the bike out of the man.

On 8th July, a fine Tuesday morning, I woke up early and made strong aromatic coffee for two. ‘COFFEE!’ I woke my wife. I could see the initial shock in her eyes, but very soon she must have realized that I was up to something. Why else on earth would her husband wake her up with coffee, while it was she who did so for the past so many years?

"What’s on your mind?" she asked me in a cool, indifferent tone, instead of offering a gentle good morning. I gathered the courage to tell her about my plans to attend the biking event. After a few seconds of silence, she asked me. "Will you be comfortable with other riders, half of your age?"

"Who cares" I said, "I just want to enjoy myself"

"Okay, I will take Neha to the dance class myself this Sunday" she said and the discussion ended abruptly.

That morning, I stopped by my parking lot and took out an old cloth to wipe my already clean 1975 make Yezdi. My cleaning was more of a gentle caress, and I spoke to her in soft tones, "This Sunday we are going to Cubbon Park and will drive to Channapatna. You will get to meet new friends, Baby!" Ignoring the baffled look in the eyes of my neighbour, I continued chatting to my ‘Black Beauty’.

Lokesh J M, who has a Yezdi Roadking’ model – 1996 started an Orkut community called – YEZDI ROADKING CLUB, BANGALORE. The idea was to help the people interested in Jawa/Yezdi bikes to share and discuss problems they had locally in Bangalore. Lokesh, one of the organisers of the rally this year, says:

"I heard about the international Jawa Day celebrations, and also about Jawa Day in Bangalore in 2007 from my fellow bike enthusiasts, who I meet at the mechanic shop (HBK Garage, Shivaji Nagar): Vicky Vikranth Hedge , who has around 23 bikes, all Jawa/Yezdi makes and Samuel John who had a Yezdi Roadking in Stock and a 1967 Jawa.

We, Amrit Appaiah, Brian A, Fazal, Vikram and myself planned the 2008 event. Posters in mechanic shops and media support ensured a great turnout. We expected 35-40 bikes, and finally 210 bikers participated!"

"Two down, one to go" I once again told myself.

12th July, and I was in bed at 9.00 PM determined to catch lot of sleep as I had to leave home early the next day in order to reach Cubbon Park at 7.00 AM. The house buzzed with activity that morning. The only thing my wife didn’t do was to perform Aarti to me like a soldier’s wife does before he leaves for the battlefront, as in Hindi movies. With constant bombardment of instructions mixed with "Do’s and Don’t’s", I made a final check of papers, keys, helmet, money, license etc, and left. Not wanting to wake up the building, I pushed my bike all the way to Bannerghatta Road outside my apartment.

"Three Down, Ready to go", I finally told myself panting.

One gentle kick and the engine turned into a living beast. Off I was on the empty roads, making my presence felt 20 meters ahead (who needs to honk when you are on a Yezdi?). At 6.55 I was in Cubbon park expecting a paltry number of 10-12 bikers. To my surprise, there were more than 90 bikers already present! The youngest one was the 79 years old Maya Krishnamurthy. There were others 60 plus riders like Col Gopinath. I felt like calling my wife and telling her that I was not the oldest biker in this event. 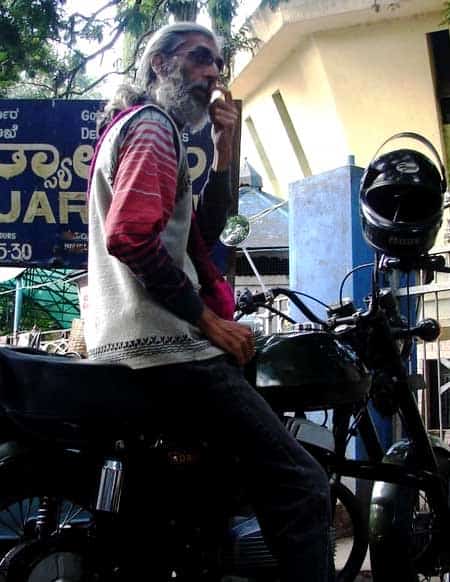 The bikes, in all shapes, sizes and colours, had one thing in common- they all were gentle giants made by Ideal Jawa factory, which brought this technology to India from Czechoslovakia in the early 60s. They ruled the Indian market until 1996, when it stopped production after invasion of the Japanese toys (read 100 cc bikes).

It was a heady mix of petrol fumes, burning rubber, shining chrome and the energy oozing out of bikers’ hearts. Every minute, new participants kept appearing. Even traffic cops got concerned and checked for a potential law and order issue. After being assured that all of us would be out by 8AM, they went back to their jeep and sat at a distance, keeping close watch on the proceedings.

There they were-red, blue, black and green Jawas in perfect stock condition, as if straight out of the showroom. There were customized Yezdis, making a character statement about their owners. There were the Moosa Bhais, Asgar’s and other surgeons and physicians sharing their cards and phone numbers with beaming and gleaming owners. This was their opportunity for business development. 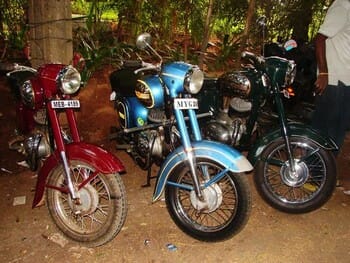 The final count was 210 bikes as Jagat Nanjappa, the renowned rally rider flagged off the event by showing the way to a maroon Jawa with buggy. Suddenly 209 other engines roared into life and the whole atmosphere vibrated with their symphony.

"This is a ride together, not a race. We will all follow the traffic rules, wear helmets, not cross 50 KMPH", said the organizers as the press reporters clicked photographs and spoke to participants. The event was covered by all major news papers including Times of India (you can see me on page 5), Deccan Chronicle and other news papers. TV9 of Kannada and Aajtak of Hindi also covered the event.

Heads turned, buses slowed down, bikes stopped and pedestrians scuttled away wherever the caravan passed through. After a few signals, as soon as the caravan hit the open highway, the group broke into 8s and 10s and managed to stay together for rest of their journey till Channapattna. Some stopped to cool down with coconut water, some stopped to cool down over heated engines and by 10.30 AM, Café Coffee day at Chanapattna was full of 200+ bikes that made it to the destination. 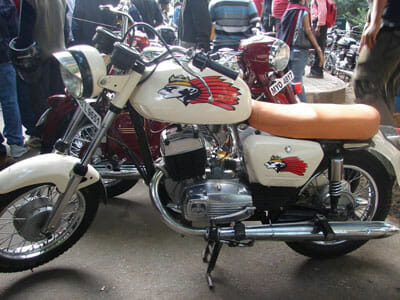 For first few minutes, the guard at Coffee Day tried to manage the parking. Soon he was outlawed and outnumbered by the constant pouring in of bikes being parked randomly. The poor fellow did not know that Yezdi and Jawa don’t follow rules, they create rules.

Finally, after a great ride, good coffee, lots of hand-shakes, exchanges of email IDs and mobile numbers, people departed from Café Coffee Day. While riding back, there was a couple on their Yezdi ahead of me and there was another rider behind me. Thus there were three Yezdies riding in a line and the wind was blowing from the opposite direction. The combined sound of three Yezdies created an illusion of an army chopper in my ears and I enjoyed this heavenly music for almost half an hour, till the three of us parted and I continued my journey alone.

Confession- even now, when I close my eyes, I can hear the chopper sound of three Yezdies as clearly as I heard it on that day.

About Manish Gurnani 3 Articles
The author has not yet added any personal or biographical info to her or his author profile.

Ashish Nair helps you get started on reducing your car or bike’s petrol/diesel consumption – from when to refuel to when to replace spark plugs.

If I were the Mayor, I assure, I would not be a “Little more than a figurehead”, but strive hard for the betterment of my place and people.