We Move Theatre, a drama group based in Bangalore staged their play ‘Namma Metro’ at the Seva Sadan auditorium in Malleswaram at 7 pm on 12th March.

The play was said to be about life in Bangalore, a city that has changed rapidly due to globalisation but still has a little bit of the old world left in it. Over a hundred people comprising a mix of all age groups had gathered in the stuffy auditorium despite the ongoing cricket world cup.

Communist muduka (old man), a former editor of a political journal, Rohini, a twenty-something techie, Suresh, an ageing bank clerk and Rahim, a peanut seller, are the protagonists of the story. Unlike in most plays, the characters do not appear on the stage from behind the curtains but from within the audience, probably symbolising what the narrator had said in the beginning – the play is about ‘you’, the common man.

A chance meeting between the four on a bench in the shade of a tree leads to sharing the story of their lives and their struggles. Communist muduka, former editor of ‘Bangalore Parishe’ a left-inclined political journal wonders how he became influenced by a mysterious stranger and turned from a staunch communist in to leaning towards capitalism.

Suresh, on the other hand is stuck in a government job struggles to meet his wife’s demand for a silk saree each month and is unable to come to terms with his daughter’s aspirations of becoming a model.  The young software techie who aspired to become a sculptor is forced to forget her dreams by an over bearing mother whose sole aim is to get her married off to a guy settled abroad. The peanut seller who has just lost his wife and baby due to a flyover collapse is fighting to get compensation money from the corrupt government official. 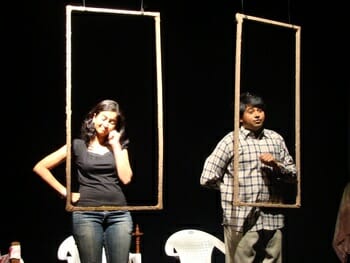 Each frame represents the point of view of the speaker. Pic: Yograj S Mudalgi.

Although the play is titled ‘Namma Metro’, the story has no direct link to the metro rail. It is only in the climax that the fleeting connection becomes obvious. Momentum is built up the protagonists narrate their tales and the challenges before them. In what seemed the final and most interesting act of the play, they decide to meet the following day to share how each of them dealt with the adversities they were facing.

However, the play ends abruptly as the meeting place is demolished to make way for Metro. The audience is left wondering about the fates of the characters. The narrator comments that all the characters, though living in Bangalore were engrossed in their lives and never went a step ahead and thought about the city they were living in. Much like the city, the characters’ lives too are a ‘work in progress’.

The characters come across as stereotypes but one cannot help but relate to their struggles and the underlying themes such as generation divide, parent-children conflicts and prevalent corruption. However, on going deeper, the stereotypes fade away.

Taunted by the Communist muduka about knowing only all things western, Rohini rattles on facts about Karnataka taking everyone by surprise. When accused of being a language fanatic by Rohini, Communist muduka orates in fluent Engish showing that there’s more to the people than meets the eye.

The play, which went on for a little more than an hour, is for the most part a comedy and the actors with their perfect timing and flawless dialogue delivery had the audience in splits. The dialogues were abounding with colloquial slang, puns and alliterations in Kannada. English was used sparingly as one character quips in Kannada, "Please talk in Kannada as plays in English are subject to entertainment tax!"  For a cast which is in their twenties they portrayed the emotional depths of the older generation some of the characters effectively.

The play ends with their meeting place being demolished to make way for Namma Metro rail. Pic: Yograj S Mudalgi.

Composed by Abhishek Narain, with lyrics by SriHarsha Grama and Abhijit Mahesh,  the soulful track ‘Bengalooru badalagu chooru’ (Bangalore change a little less) is used as an interlude between scenes  Otherwise music is sparingly used in the play. The set designed by Hanu Ramsanjeev makes use of the limited space intelligently. The central space is the meeting point for the characters while the periphery is used by each character to tell their stories. The play was written and directed by Abhishek Iyengar.

We Move theatre formed in early 2010, is made up mostly of youth in their twenties. They have staged eight productions and ‘Namma Metro’ was their ninth. Their previous production includes ‘Malgudi Daze’, an adaptation of R K Narayan’s Malgudi Days. ⊕

The Brigadier marches for HSR

He is the ‘military man’ of HSR Layout and he is persistent when it comes to getting work done for his community.

Play equipments were not installed for years. Dustbins cost four times more than the market price. Koramangala’s parks have seen it all.

That’s the reason being cited by both BBMP and BWSSB for a project that started way back in September 2006. Two years past deadline, work is nowhere close to being completed.