In our country, it is not a common occurrence to find someone changing the direction of their career completely, and strike out in a totally different direction. In the course of the past few years, I have been privileged, though, to come into contact with a few such individuals, and their stories interested me greatly.

When I first met B N Ramesh (who now spells his name as Ramessh, thanks to numerology) he was an executive in the corporate world…his last job was as the all-India Sales Manager of K G Denims. He did his M.Sc in Physics and Electronics, and is a gold medallist from Bangalore University. He did research in lasers at the Indian Institute of Science for a year. Being an accomplished mridangam player he was a musician in his spare time, but his job definitely came first. 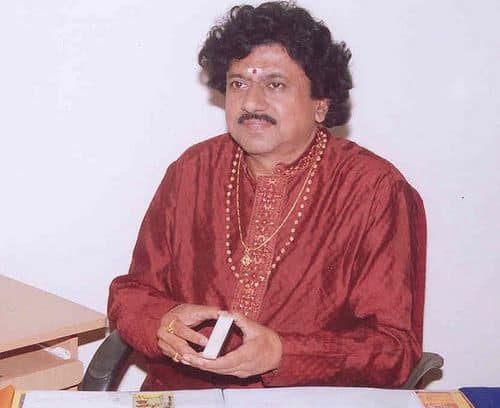 So when I met him a few months ago, I was intrigued when he told me that he had quit his job to become a professional Tarot card-reader. What could make an executive give up a regular salary for such an esoteric pursuit? How did he get involved in this interest, and what kept him in it? I decided to meet him and find out.

It turned out that Ramessh had just been accorded the Service Award by the Abhinava Spiritual Academy in connection with International Women’s Day, which piqued my interest a little more. I asked him how far back his interest in Tarot cards dated.

"From my youth, spirituality has been a part of my life," asserts Ramessh. "I used to listen to many philosophers; their religion was less of interest to me than the import of their teachings. I have always felt that there exist unseen forces which can shape our lives." However, a conventional education and a job was what was in the cards, and that was what he followed for a while.

In 1986, however, Ramessh met Dolores Pereira, a tarot card reader, and he was very impressed with the accuracy of her readings. He met her again around the mid-1990’s, and he was fascinated by the power of prediction that seemed to reside in these cards. The cards were not espoused by any religion in particular, but seemed to cut across all faiths or cultures.

From then on his interest deepened, and he steadily learnt the craft from her and other readers as well. And about 7 years ago, he says, he felt he had gained enough knowledge of the field to start professional readings.

Was it tough to give up his job for such an uncharted course in India?

"Yes, I thought long and hard about it," he says, smiling. "But I was convinced about the power that lay in the cards, and since I, too, had been identified as having psychic powers, when I took a test on the internet which gave the assessment. I decided to give it a shot." The exact words of the assessment were: "Ramessh, you have an unsually stong psychic talent in the area of precognition the art of foretelling the future."

His wife Sandhya has been very supportive of his decision, when she could easily have been worried about the lack of regular income and the resultant insecurity in their lives. "But I was confident," he declares. "After all, it was the tarot cards themselves that guided me to this." The messages were that he had from the readings, were to guide people and throw light on their lives’ problems.

A parallel interest in palmistry and astrology also developed. "Both these disciplines have been long accepted in India," he explains, adding that he is pursuing the Vidwan course in astrology called the Jyotisha Praveena to be followed by the Visharad course next year. Have these studies helped him with the tarot card-reading? "Sometimes," he declares. "Sometimes the tarot cards themselves give the life-solutions, sometimes I take their message along with palmistry."

All in a day’s work

Each tarot card-reading session is set up by prior appointment. "I meditate for some time, to get into a calm, neutral frame of mind, and to be completely receptive," Ramessh says. A session lasts several hours, and he does not advocate that people who come to him for reading sessions be in any kind of hurry.

Sometimes, Ramessh has had sessions which have started at 10 PM and gone on until 1AM! Most often, a single long session is all that it takes to get solutions to problems, but sometimes, further sessions are required. A client is a client for life, he says, as he becomes quite close to them in the course of the readings.

Does he feel exhausted after these intense readings? "That’s the funny part of these readings," he exclaims. "Contrary to what one would expect, I feel remarkably fresh, and have no sense of fatigue at all. In fact, I feel energised when I have been able to help the people who come to me with their difficulties."

Ramessh considers himself only a reader in the real sense…a channel for the messages in the tarot cards for his clients. But he is completely convinced that the solutions to their problems is always given by the cards. "Most often, it requires a change of both mindset and lifestyles (to adopt their messages)," he declares. "I advise people not to have a closed mind about radical changes, and give them a chance to work."

The cards themselves give specific messages, and sometimes he counsels an employee, for example, to have patience, or accept their mistakes to their boss. "Tarot card reading is a psychological tool as much as a counselling session," he avers.

Has he had people who are not satisfied with the readings? "No," he says categorically. In fact, he says that most of his clients come back for repeat readings after some time, or send him other prospective clients; word of mouth, he says, is the only advertising he has ever needed.

Ramessh now has several corporate clients too – there are executives who come from abroad, whom he finds them more open-minded than people here. But it is up to his clients to accept or reject the solutions offered. Most of them take it as they want solutions to their problems, which is why they approached him in the first place.

For a higher purpose

Is there any other way that he gets clients for this esoteric art? A couple of times, he says, he has taken part in a few gatherings like the Brahmin Association and the Sanketi Mahila Mela, and given them his brochure, which gives people an idea of what the tarot-card reading is.. At these places, people usually took a short reading, and most came back for an in-depth reading later.

People from different faiths have come to consult him, he says, and so there is really no religious underpinning to the art, only a sense of spirituality. Ramessh no longer attends such gatherings, as people have been increasingly referring their friends to him.

It was the Sanketi Mahila Mela which got him into tarot readings for women; it is his firm belief that women in our society have more than their share of the burden to bear. It was in this regard that the Abhinava Spiritual Academy recognised his contribution and honoured him. 60-65 per cent of people are women, who have problems with their careers, in-laws or children’s education. Depending on the messages on the cards, he elaborates and explained to them how they could solve their problem.

How does he handle client confidentiality? "Oh, I just forget about the previous client before the next arrives," he says. "In any case, there is no discussion of one client with another; I don’t encourage it. The time should be spent talking about their own problems, not about others."

Does he face a lot of scepticism? "In a sense, no," he replies, "because the people who come to me are the ones who are willing to listen to the cards to solve their problems. If they were sceptics, they might not come to me at all." He finds tarot card reading well documented on the net, and browses a lot to read up more about the subject and has taken some courses online too.

The reader is not worried about financial remuneration, as he feels it will pick up only as more clients come in and his reputation spreads by word of mouth. But B N Ramessh is passionate enough about tarot card-reading to feel that whether or not it gives him monetary rewards, the practising of the art full-time is what he wants to do in life.

He would like to train others with a spiritual or psychic bent, also, in this art, and has just started an institute called Spiritual and Esoteric Science Institute, with plans to conduct some training sessions. For his work, his residence serves him right now as an office, and the flexibilty of the timings is most suitable to the long time a session may take, and the home atmosphere often is helpful for his clients.

For a reading of about 10 cards, he charges about Rs.1000 and for 5 cards, Rs. 500; charges vary according to the reading. Nearly 2000 people have passed through his home, thanks in part to the publicity that he received though the articles on him in the Deccan Herald and Praja Vani.

So what exactly does a tarot card-reading session involve? There are78 cards in a tarot deck. Readers use.different methods, he says, but he himself he picks up the cards after meditation, and does not let his clients pick them up as others do. Specific questions need to be asked, but "method" questions are what must be asked, that is, "what do I have to do to get married?" rather than "Will I get married?" In this sense, it is different from astrology…one can take cards for the past, present and future, as required.

Tarot cards have several classifications; there are 22 major arcana cards, the Fool, the Magician, the Empress, 56 minor arcana cards. The minors have four different classifications: wands, Ace of Wands, cups, fords, and pentacles. Each represents certain areas of life.
Does the craft need some form of professional registration? In India no professional organisation for registering as a tarot card reader exists, he says, but in the US and in Austalia, there are organisations of tarot card readers.

In Bangalore, there are probably 6 or 7 practitioners; in Mumbai Sunita Menon is quite popular. Smiling, he says, that since cricket matches started having tarot card readers, many people relate cricket to the tarot card readings! But those readings are just for fun; a good reading is a one-to-one equation and requires a calm atmosphere, and is a more serious business altogether.

Residents are disenchanted with nodal officers and believe corporators are likely to be more effective and democratic and at least resolve minor issues.

When the Tiger came back to his fort

Making a flower vanish or turning a rupee coin into a two rupee coin is cakewalk for Dr Boing. He manages to entertain sick children at the same time.