While Bombay found many an obsequious reference in timeless books by its Vikram Chandras and Suketu Mehtas; William Dalrymple wrote home about Delhi in The City of Djinns; and numerous homegrown authors did as much for Kolkata, Bangalore drew a near blank in the English literary scene. Until now, of course. 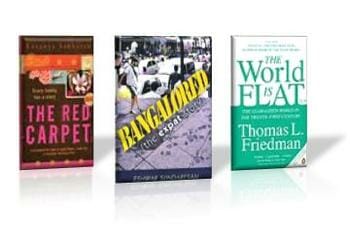 No longer the poor cousin, Namma Bengaluru is coming to seal its place on literary firmament with authors increasingly finding inspiration from Garden City. Thanks in part to the Indian Publishing industry opening up, leading to writers of diverse backgrounds.

Thanks, also, to international interest facilitated by a flat world– A term popularized by Thomas Friedman in his bestselling book: The World Is Flat: A Brief History Of The Twenty First Century(2005). The book is regarded as a significant work on the dynamics of globalization with many interesting insights such as: ""Girls, when I was growing up, my parents used to say to me, ‘Tom, finish your dinner- people in China and India are starving. ‘My advice to you is: Girls, finish your homework-people in China and India are starving for your jobs." He says of the outsourcing phenomenon that is revolutionizing businesses worldwide. The book begins with the author’s observations of Bangalore, a key player in the outsourcing scene. "No one ever gave me directions like this on a golf course before: "Aim at either Microsoft or IBM." "Friedman writes in the very first chapter. He amusedly explains that he was standing ‘not in Kansas City’ but at the KGA golf course in Bangalore and points at the marooning of tech bigwigs here to drive his point home. Friedman repeatedly returns to the Bangalore theme to discuss his ideas of ‘flatteners’ and ‘triple convergence’ in the scheme of globalization.

Eswar Sundaresan’s Bangalored: The Expat Story (2006) is a book that alternately focuses solely on Bangalore’s cultural climate. Sundaresan, an ex IT professional, gave up a plum job in the US to return and chase an unexposed side to Bangalore. His book gives readers glimpses of the city through the eyes of its vibrant expatriate populace; tracing the pains and glories of Trinidadian restaurateurs, Chinese Shoemakers, Dutch Bosses, Kenyans, Britons, Americans among others– all as they live and love the city. The book throws up a lot of interesting, hitherto obscure, facts while being simple and unpretentious.

In spite of steering clear of an unrealistic, sugary sweet picture of Expatriate life, Bangalored is, perhaps, also proof-in-paperback of the city’s spirit which has quelled bigotry and antagonism to reasonable extents.

One Bangalorean author, the news of whose book-deal had literary circles reverberating with excitement is Lavanya Sankaran. Sankaran wrote a collection of stories titled The Red Carpet, which was marketed with a tagline that said it all-Bangalore Stories. She reportedly received a 6 figure advance for her book; not before 9 publishers fought each other off for the rights. While tongues wagged about hype being a precursor to mediocrity, the book won favor with critics for its elegant writing. Every story has elements and characters that you are sure you’ve experienced and met for yourself: insufferable socialites with Bombay withdrawal symptoms; neighborhood gossips; NRIs out to find the truth about India; Software entrepreneurs striking gold; drivers flummoxed by their memsahib‘s lifestyles.

Although these stories could have been based anywhere on the planet, the sensibilities come across as purely Bangalorean. Besides, there are the usual colloquialisms and city settings: Different people are ‘Ond Thara’; disdain is indicated by a ‘chumma’; a traditional Iyer family savors its filter coffee in Malleswaram and an inquisitive gentleman snoops around the neighborhood while on his way to Ulsoor Market.

It’s silly how joyful it is to see one’s own city in print. Some stories leave you livid with epiphanies, presenting never before seen pictures of home; while at other times are comforting in their reassuring descriptions of the everyday. ⊕

Shade the city green at the Neralu Tree Festival

Looking forward to celebrate and revel in the beauty of Bengaluru’s trees? Here’s a peek into all that’s coming up at the Neralu Urban Tree Festival 2015.

Check this out, a new apartment law on the cards

As an apartment owner in the city, whom would you turn to if you discover that your builder has not registered the Deed of Declaration? Or that the apartment association has been wrongly registered? After decades, some redress may finally be on the anvil.

Though RWAs are supposed to be independent of political affiliations, RWA reps across Bengaluru are getting worried about increasing interference from corporators and MLAs.