The soft rhythms of the tabla greet visitors at ‘Sriram’, the simple residence of Pandit Ravindra Yavagal at Jakkur, Bangalore. The living room is stacked with trophies, mementoes and citations in every nook and corner. The ambience reflects the simplicity of Karnataka’s famous tabalchi, and his passion for this classical art. 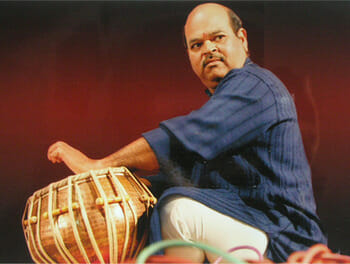 49 year old Ravindra Yavagal, a Staff Tabla Vidwan of All India Radio since 1981, is the youngest son of Late Ramachandra Yavagal. In an era when parents did not have to study child psychology to bring up dozens of children, the senior Yavagal took pains to find out his children’s interests and fostered them, though he himself had studied only up to seventh standard.

The father spotted young Ravindra’s love for rhythm when the latter used to drum his fingers on any available surface in accompaniment to anyone’s singing. The former himself was a great lover of music and gifted singer, but was given no chance to develop is passion. Having learnt tabla just by listening to great artistes, the father started teaching young Ravindra when he was just four.

Yavagal’s maternal uncle Kallappa Badiger used to play folk instruments like the tabla and karadi majalu in village festivals and also trained drama artistes in Harmonium. His paternal uncle Veerupakshappa Yavagal used to play a bit of tabla. Apart from this, Yavagal’s achievements in the field of Hindustani Music are mostly self-sought.

After getting the basics from his father, young Ravindra learnt the art for a couple of years from Veeranna Kamkar of Gayathri Gayana Shala, Hubli. Later, he came under the tutelage of Pandit Sheshagiri Hanagal, a well-known tabla maestro from the Dharwar belt. Yavagal also feels blessed to have been guided by Pandit Lalji Gokhale, disciple of the legendary tabla Maestro Ustad Ahmed Jan Tirakhwa.

As a child prodigy Ravindra Yavagal has performed with renowned artistes from a very young age. His first solo performance was at the prestigious Sawai Gandharva Music Festival, Kundagol, at the age of ten. But much before that, his talent was appreciated by many senior musicians and critics like Professor Parthasarathy of KMC, Harikatha Vidwan Karagudri, MLC Hallikeri Gudlappa, Harikatha Vidwan Harisarvothamachar and many others. In fact Vidwan Harisarvothamachar had even lovingly said that the rhythm of 5-year old Ravindra had attracted Navalgund Gavi Mutt Swamiji to his Harikatha.

“I consider my father special because he had the forethought to record all the compliments I received in a note book” says Yavagal emotionally, “how many of us would have bothered to?” The note book also has paper cuttings recognizing him as a child prodigy, right from 1963.

In rhythm with the masters 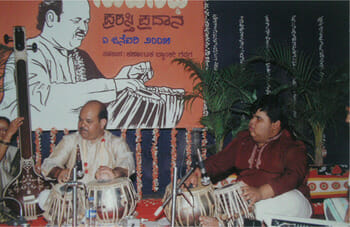 Ravindra Yavagal at a concert.

Yavagal is the most sought after tabla saathi artiste of the country today. He has performed in the US, Egypt and Hong Kong and is a frequent performer on Akashavani and various channels of television. The Government of Karnataka nominated him as an honorary member of the Karnataka Sangeeta Nritya Academy from 2002 to 2004 and also included him in the selection committees of the prestigious awards like Kanaka Purandhara Award and Chowdaiah Award.

Yavagal is on the advisory Committee of the Directorate of Text Books, Government of Karnataka and worked as a Scrutiniser in bringing out Talavadya Text Books for proficiency level students. He was conferred the Rajyotsava Award by the Government of Karnataka in 1995. Other notable awards and titles that he has won include the Nada Nidhi from Kalachetana, a cultural academy of Gadag, in 2005 and Chandrahaasa Prashasti from Sangeeta Seva Samiti, Sorab, in 2005.

Support for a social cause

He has an enviable list of achievements, but Yavagal refuses to sit on his laurels. “I feel I have a lot to give to this society” he says, “I know there are hundreds of youngsters with a lot of talent out there who do not have fathers like mine or get opportunities like I did. I want them all to achieve their goals”. Besides teaching talented youngsters, including a few spirited but underprivileged who come all the way from places like Shimoga, Bhadravathi and Mysore, Yavagal has started the Sri Rama Kala Vedike Trust in memory of his father, in the year 2006.

The Vedike offers a scholarship of Rs.2500 per annum to seven deserving youngsters pursuing Hindustani music every year. The selection is done based on merit and means, and on the recommendations of their respective Gurus and senior musicians. Senior artistes are honoured at the Vedike’s annual music festivals and one upcoming artiste is recognized. Upcoming artistes share the stage along with renowned ones in the stage performances.

Yavagal’s father noted all his son’s achievements in a note book. On the left is a news paper cutting of the report about the child prodigy Master Ravindra Yavagal, published in a Kannada weekly magazine ‘Karmaveera’ on 20th Feb., 1965, in which the young Tabla vaadak is appreciated and a bright future for him as at the national level is predicted. On the right is a testimonial written about young Ravindra’s talent, by the Asst.Editor of Karmaveera, in his own hand, in 1964.

Yavagal is happy that many of his disciples are now leading tabla artistes who accompany great musicians, won national awards and secured B-High grade from AIR. “What more can a Guru ask for?” says Yavagal with pride. He himself got his ‘A’ Grade in 1985, and in 2008, was awarded the ‘Top Rank’, an honour awarded to only a handful of artiste. Only these artistes are referred to as ‘Pandits’. Unfortunately, the senior Yavagal could not see his son reach the pinnacle of success, as he passed away when Ravindra was in first year PUC.

Pandit Yavagal can be contacted on email at ravindrayavagal AT yahoo DOT com.

Yavagal has had precious experiences during his organisation’s annual music fests. The most memorable was a fund-raiser concert for the Trust that was organised in the year 2006, when Pt Hariprasad Chourasia and Dr Gangubai Hanagal unexpectedly sang together on stage, accompanied by Yavagal’s 84 year old guru on the tabla. Pandit Chaurasia took back a recording of this concert, along with all the news clippings about the memorable event.

Ravindra Yavagal has played for many jugalbandi programmes and many of his performances have been released as audio cassettes. One of the popular recordings is ‘Mangala Dhwani’, where he has played along with Prakash Sontakki, Praveen Ghodkindi and Sandeep Chatterjee. Yavagal has been fondly remembered by Pt Bhimsen Joshi in his autobiography. Apart from wonderful memories, he has a good collection of great maestros of Hindustani music.

Murphy Town Market may be joining the list of over 800 heritage structures in Bengaluru. The BBMP has dropped its plan to renovate the old market, saying the structure is solid.

From a sleepy neighbourhood to a bustling suburb