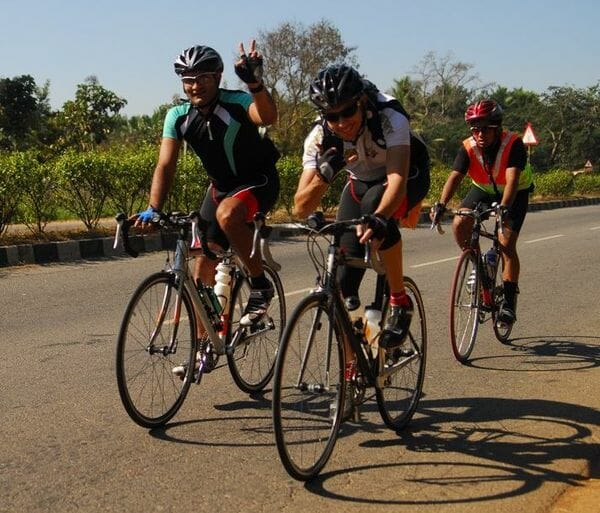 On this Saturday, February 13, if you happen to be travelling to Mysore don’t be surprised to see more than 50-70 cyclists who will take to this route for the Bangalore Brevets 300 km ride. This is part of a series of ongoing brevet rides in the city, held as qualifiers to the prestigious Paris-Brest-Paris event, an approximately 1200 km ride that happens once in four years. This year, the Paris ride will take place in August and a few lucky riders will travel from India to participate in the event.

A brevet is a self supported ride where a cyclist has to complete the allocated distance within a certain time frame. This is a hugely popular event the world over and is also called a randonneuring or audax ride.  In a brevet, cyclists – who, may be referred to as randonneurs – follow a designated but unmarked route (usually 200 km to 1400 km), passing through check-point controls, and must complete the course within specified time limits. These limits, while challenging, still allow the ride to be completed at a comfortable pace – there is no requirement to cycle at racing speeds and that is what makes the brevet different from a race. There are no first and second places, there are only finishers!

Bangalore became the third city in India to win the honour of hosting brevet rides after Mumbai and Pune. The launch promotion ride In December 2010 saw over 200 riders participate in different distance categories, while the first qualifier (a 200km ride) on January 15 saw 112 riders participate and 100 riders complete, making it a total of 20,000+ cumulative kilometres cycled on one day! The next event, a distance of 300 kms on the Bangalore-Mysore (Chamundi Hills)-Bangalore route is expected to see nearly 50-70 riders attempt this long distance. It’s not going to be easy by any stretch. It’s a busy road, there will be traffic to battle and the sun during the day time. But long distance cycling seems to have caught the fancy of many Indian cyclists today. We even have cyclists from places like Pune and Delhi coming in to participate in the event.

Ask any cyclist the reason for doing such a long endurance ride and the reasons are quite similar. Shankar Sastry, a CA, admits that he justs loves riding. Not only does he get to see new places, explore at his leisurely pace, meet new people from all walks of life, but it also provides a new lease of life for some unused muscles!

Another enthusiastic long distance cyclist Akshay Prabhu Gaonkar believes that long distance cycling has come of age in Bangalore and people are no longer suprised when he posts about his century plus long rides! An aerospace engineer by profession, Akshay enjoys long rides because its the only time he can be with himself, and detached from the rest of the world.

The Kick off at Cubbon Park for the first qualifier held in January. Pic: Vinay Raj.

Being fitter and faster is yet another reason to take to long distance cycling, says Venkatachalam Ramakrishnan (banker by day, but a cyclist at all other times!) who clocked 10,000 miles on the cycle last year (15 double centuries and 1 triple century ride). "What attracts me to a brevet – it is a fantastic event to gun for, anybody with 3-4 months of proper training and nutrition can aim for this distance to be achieved within daylight! Which means, if you have a day off on a working day, and your better half is working (happens most of the times to bankers on RBI holidays!), you can get these valuable miles and come back before she finds out," says Venkatachalam. A strategy which seems to have worked for him.

That apart, he points out that a 200-300 km ride means 8-13 hours riding time, and about 4-6000 Kcals burnt. A couple of these rides means you can try and work on your fat percentages, weight loss without compromising too much on food. "Personally, my fat percentage has reduced by 7 percent in one year, thanks to all the long distance cycling," reveals Venkatachalam.

And no, it doesn’t require any superhuman effort, but just some dedication and preparation. Says Shankar, "Having done distances of upto 200km quite frequently in the past and a daily ride of around 35km is what helps me. Gearing up for me means knowing the route better, planning my breaks and knowing my bike better and keep up my daily rides so I do not lose stamina."

What is particularly commendable is the way the whole cycling community, under the umbrella of the voluntary group, the Bangalore Bicycling Club, has come together to host this event in Bangalore. Enthusiastic volunteers have spent days and nights to ensure that these events are conducted without a hitch and all of them are doing it for the love of cycling!

So be prepared to see a lot of cyclists take to the road on Saturday for this exciting event. And if you’re driving past in a 4-wheeler make sure you’re considerate and share the road with our passionate cyclists! Maybe even give them a thumbs up when you pass by – they will be traversing the distance that you’re doing in a car and back on 2 non-mechanised wheels without support – surely they can do with your goodwill and cheer!

Find out more about cycling in Bangalore: http://www.bangalorebikersclub.com

About Anita Bora 1 Article
The author has not yet added any personal or biographical info to her or his author profile.

Water is a contentious issue in the city today. And this man helps people make effective use of rainwater and recharge borewells.

There is only one person who can ensure a “Swachh Bharat”: You!

The Prime Minister’s vision of a clean India will remain a pipe dream unless the common man takes it upon himself.