For the last two years, a park-cum-playground in 30th main in JP Nagar 6th phase has lost almost a third of its area. This part of the site, which was designated for the park, was encroached for the construction of two temples. Today only the playground remains and the site itself is known after one of the temples. While one temple is a permanent structure and almost 75% of its work is complete, the other is a temporary structure.

Playground attached the park in J P Nagar 6th phase has been taken over for building temples and fenced off. Pic: Navya P K

Col Seshadri (Retd), a resident of the area, says, "This was a BDA Civic Amenity site. For over 20 years there have been disputes about how it would be used and three years back it was decided to be used as park and playground. Two years back the temple construction started; we have been complaining to various authorities, but there have been no steps for demolishing them," he says.

But the state has a law that mandates civic bodies to publicise information about all parks every year, to accept objections from public on any information listed and to demolish illegal structures based on these complaints.

The Karnataka Parks, Play-fields and Open spaces (Preservation and Regulation act), 1985, says that the local authority should publicise information about these spaces annually in a gazette and made available to public. But the law has remained only on paper so far.

Though BBMP was supposed to submit the report for the last 25 years, it is only in 2010 that it has taken this initiative. No survey was done after the formation of BBMP in 2007 from the erstwhile BMP and peripheral areas. There is also no updated information since the formation of new wards and zones.

Once BBMP submits the information to the government, citizens can raise objections in case of any errors or complaints – for instance, if a park has been encroached or has been converted for a different purpose. 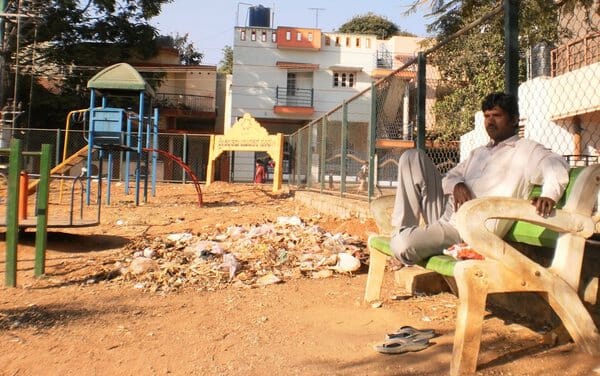 The temples use the children’s area in the playground to dump garbage. Pic: Navya P K

Last year, BBMP’s estate department submitted the data in two stages – one in May and second in June – but public has been largely unaware of the information. According to the law, after BBMP submits this preliminary information, public has three months to file objections. After considering objections, government issues a final notification approving the information.

"For instance, if someone has encroached a park, we serve him a notice. If he has any documents to prove ownership, the case will go to court. Otherwise BBMP can demolish his property," says M Devarajappa, Assistant Commissioner at BBMP (Estate).

Currently the information is published only in the official gazette, and not on BBMP’s website.

This year, the only objection was from the government itself, where it had asked for a clarification, says Mujibullah Zaffari, Deputy Commissioner at the BBMP Estate department. "According to the law, this has to be published in gazette only. Public would not know about it, like most other government information," he says.

However, the data in its present form itself may not be useful. The prescribed format asks for the names of the parks/open spaces, the number of new such spaces that came during the year, and details of action taken by BBMP for maintaining the areas. In the list given by BBMP, only the names of the parks and open spaces have been mentioned; all other information is missing.

Zaffari says that the prescribed format is not clear. "I have submitted a different format – which gives the dimensions of parks, exact location etc – for the government’s approval; the current format is not usable. Also there are no surveyors to give accurate information," he says.

The department has now appointed 15 surveyors; 1067 parks, play-fields and open spaces have been surveyed and 786 of these have been published, says Zaffari.

Citizen Matters has copies of both of BBMP’s gazetted notifications of 2010. The first one, of 3rd May 2010 lists has 679 items (parks, play-fields or open spaces). Even if this list was published online it is incomprehensible to citizens because it contains no clear locality or ward level information conistently for all entries. The second list of 388 items gazetted in June 2010 is a little better – it has ward names for each park, play-field or open space.

UDD aware of the malaise

A senior official at the Urban Development Department (UDD), who does not wish to be named, says that the law itself is inadequate. "High levels of encroachment and wastage of public money can be prevented only if public and NGOs get information about what’s there. Data on boundaries, measurements, assets within parks and investment made, should be published. As prescribed in the law, it should be updated annually and presented in the BBMP Council for public consumption," he says.

BDA Commissioner Bharat Lal Meena says that public can give their complaints about these sites, if any.

"The law does not assign responsibility to any particular body, so any organization that has parks under its jurisdiction, gives information separately. The responsibility has to be fixed on one body so that all information can be collected and published in media," says the UDD official. ⊕

Revival of a musical heritage

Bangalore’s own outdoor space for musical concerts at Cubbon park is now made available again, for free! Hail the revival of the Cubbon Park Bandstand.

“I always knew I would get the lake”

And she finally did! It is thanks to her passion and legal expertise that Koramangala today boasts of an 11-acre lung space – the Meistripalya kere. Meet Laila Ollapally, a Koramangalite and practicing advocate.

A review committee led by Dr A Ravindra has recommended major revisions to the city’s Revised Master Plan 2015, with many changes proposed in critical zoning rules. Will the government accept?