It was the year 1848. Krishnaraja Wodeyar IV was the Maharaja of Mysore. A plague epidemic had hit Bangalore. Perturbed by living conditions in the cramped city area (primarily in and around present day Majestic), the forward-looking Dewan of Mysore, Sheshadri Iyer, initiated the creation of Malleswaram and Basavanagudi. His vision was to create new and clean suburbs to accommodate the city’s burgeoning population. 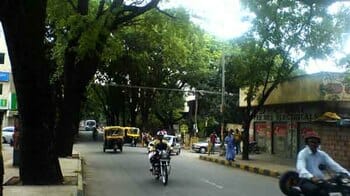 I remember going to Malleswaram as a kid tagging along with my mother for shopping sprees. A lot of memories come flooding back – the Malleswaram Circle Jataka (Tonga/horse cart) Stand smelling of hay, piping hot dosas at 8th Cross Janatha Hotel and of course the shopping. The Malleswaram I remembered was full of shops, trees, temples and outstanding South Indian food.

In a city growing as rapidly as Bangalore is, how much had Malleswaram changed? Had the glass-and-chrome-building brigade invaded this area? Were the temples intact? Had the mega mall replaced the corner angadi (store)? I set out on a cloudy morning to find out. 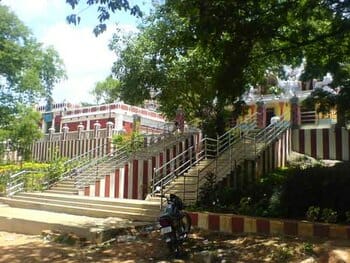 As I walked down the ‘Temple Street’, a narrow one lane road, a young boy zipped past me in his shiny new bike. Glaring at him and with not so holy thoughts in my mind, I entered the religious zone. Kadu in Kannada means forest. This area was once a thickly wooded region and the Kadu Malleswara temple dates back to the time of Maratha ruler Shivaji whose brother Venkoji constructed this temple.

The Nandeeshwara Temple situated opposite to this has a more fascinating story. This ancient temple was apparently buried under thick layers of soil. According to the priest, when a local politician tried to sell this place a few years back, the people from the neighbourhood opposed the move and demanded an excavation. To their amazement, this underground temple and the kalyani (tank) was intact, complete with water pouring out of a Nandi statue’s mouth onto a Shiva linga (idol) directly below it.

I sat watching the serene Nandi for sometime, admiring the sculptor’s ingenuity and pondering over the temple’s unknown history. Adjacent to Kadu Malleswara stands yet another old temple, the Lakshmi Narasimhaswamy temple, built in Dravidian style with the traditional gopuram. I would recommend sitting under the tree in the temple courtyard as a wonderful therapeutic experience.

On the corner of this street is Adigas, a South Indian Fast Food joint, creating wafting aromas that beckon you. Few yards away from these centuries-old temples stands a modern day glass and chrome building that houses ‘Coffee Day’ and ‘Health and Glow’ outlets.

Diagonally opposite this stands a dilapidated house complete with chicken-mesh windows and rounded balconies. Next to this old building an Airtel outlet exists peacefully. You see this old-and-new juxtaposition everywhere in Malleswaram. 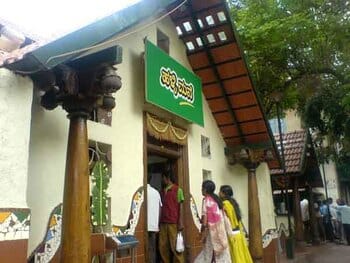 Malleswaram has been planned like a chess board. Roads running from North to South are Main Roads and perpendicular to these are Crosses. There is also a Boundary Road that, true to name, runs beside the Railway line to mark the boundary to this ‘extension’. Any Malleswaram landmark or address will consist of a Cross and a Main. The two major cross roads are 8th cross and 18th Cross. Between these cross roads run two Main roads. The wonderfully named Sampige and Margosa Roads derive their names from the flowery Sampige and Margosa trees that once lined these roads.

8th Cross could be termed as the middle class version of Brigade Road. However, far from the western look of Brigade Road in the city centre, 8th cross has a typical South Indian feel. The Ganesha Temple, the teeming vegetable markets, numerous textile shops and street vendors creates a melange of colourful chaos. The mound of kumkum and haldi in the grandhige angadi is a sight for sore eyes.

Make it a point to walk through the adjoining 11th Cross market and inhale the fragrance of the world’s best perfume – fresh flowers and garlands. On the eve of a festival, this place is abuzz like a beehive. 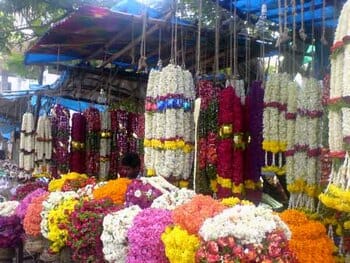 Though there are many small retail shops, it’s the street vendors who add the special charm to this place. These vendors sell pretty much everything under the sun, from baskets to bindis, and handbags to clothes. I wanted to take a photograph of some rangoli designs made by a boy selling sieves that creates readymade rangoli patterns. He was slightly awed by the fact that what he was doing merits a photograph.

A flower seller nearby complained, ‘Madam, neevu photo tagondu paper ge haktira, illi Police bandu namanna odistare’ (‘Madam, you publish our photos in the newspaper and the police shoo us away’). Mr Shankar Prasad, a resident of the area for over 50 years, remarked that there is always a cat and mouse game between the street vendors and the police. His solution – convert 8th Cross into a non-motoring zone and let all the vendors and shoppers conduct their business peacefully. 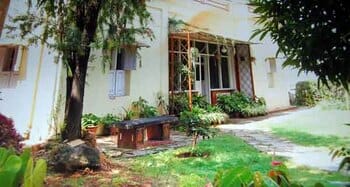 Chowdiah Hall on 16th Cross is the venue for innumerable music and theatre events. Sankey Tank, a soothing water body, is just across the road and is perfect for an evening walk.

The verdant Indian Institute of Science campus provides much-needed lung space. This Institute was the brainchild of Jamshedji Tata. In 1898, the Royal Society of London conducted a survey and found Bangalore as the most suitable location for such an Institute. It has become India’s premier science research institute and many eminent scientists like Sir C V Raman, Homi Bhabha, Vikram Sarabhai and CNR Rao have been associated with it.

Malleswaram is also home to many famous institutions such as MES (Mysore Education Society), B P Indian School and Cluny Convent. One of the founders of MES Institution, M Chinnaswamy, also founded KSCA and the cricket stadium is named after him.

Malleswaram at a Glance

One of Malleswaram’s most famous residents was Sir C V Raman. His house still stands next to the MES College, his family not yet tempted by the soaring realty prices to sell out. Mr Prasad’s 90 year old house, however, is now being replaced by a new apartment complex. Though they are nostalgic about the place, his wife, Usha, commented that they had to be practical. The house was crumbling and maintenance cost was high.

Change, sadly, is inevitable. Villa Polipatti (maintained as a heritage hotel) or the elegant building on 6th Main that houses the Information and Broadcasting Department still stand proudly, reminding us of another era. In this rapidly changing world, Malleswaram has managed to retain a fine balance between its old charm and new world amenities.

Malleswaram has something to offer to everyone. Come for the temples, linger on to see the heritage houses, strike some good shopping bargains, enjoy the patches of green amidst the concrete jungle called Bangalore, and top it all up with some dosas.

Related Links :
Heritage Houses in Malleswaram
Malleswaram in the Eighties

A journey down memory lane in Russell Market

Three years after the fire tragedy, Russell Market is back to business as usual. Pavan Kulkarni walks through the heritage building, to capture the glimpses of the market and narrate the stories that he comes across.

With Germany’s renewed focus on the technology of film-making, new opportunities for collaboration between Germany and India might open up in the years ahead.