On Republic day, the bright skies of Bangalore were adorned with creative and colourful kites. The 2nd annual Bangalore kites festival was held at the palace grounds. Over ten thousand kite fliers and enthusiasts attended the festival organised by Junior Chamber International (JCI). 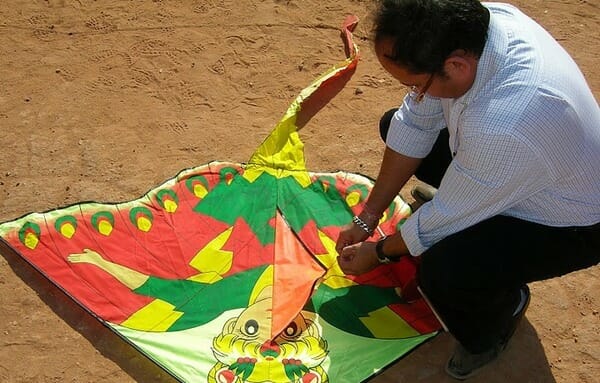 Preparing the kite for a flight. Pic: Deepti Sarma

Over 15 participants from places like Holland, France, Gujarat, Maharastra and Karnataka brought their favourite kites. The skies around palace grounds saw inflated teddy bear, alligator, giant frog, paul -the octopus, tigers and many such creations of these clubs. There were trains of simple symmetric kites too.

For the people who came to watch the fun, there were plenty of kite stalls to inspire them. The stalls sold variety of kites for an average price of Rs 100 for 3.

For those of you who thought that’s cheap, making charges of the giant teddy kite was 2 lakh rupees. The sprawling grounds saw kites of various sizes from few inches to 60ft.

Fun for all at Bengaluru’s Kites festival. Pic: Deepti Sarma

Lekhini V Bhansali, all of 12 years old said that she loved the open space allotted for the event and the colourful kites made her want to fly many more kites.

Ashok H Shah who manages Nisarg Designer Kite studio (Maharastra) was the advisor to the organisers. Ashok, who has represented India in many a kite festivals world over organises workshops for kite making and kite flying. His club brought paul-the octopus, a gaint green frog and dragon. In comparison to the festivals abroad, Ashok feels that Indians are much more creative and they can make many themes out of not so expensive material as well.

Ton and Maria Vinken of Holland who have been professional kite fliers for 40 years opined that Bangalore should be proud to have organised this event so well. Ton felt that the weather and people here made this show a hit.

Some enthusiastic children did catch Maria’s attention and she helped them with few kite flying basics. One such boy was 12-year-old Khush Jain, who said he was joyous after flying a blue kite.

The organising committee plans to include kite making and flying workshops for the next year’s festival. ⊕

Bengaluru colleges have tried to adapt to online classes, yet the faculty themselves say these classes are boring and ineffective.

The first edition of the Bangalore Biz LitFest hopes to motivate the city’s executives and give them a break from the daily rigmarole. Here’s how it all came about.