It’s been an interesting beginning to the New Year for cinema buffs in Bangalore. January began with the screening of the Travelling Film South Asia (TFSA) at the Bangalore International Centre. This mobile campaign is part of an initiative to promote and popularise the best of South Asian documentaries at more than 50 international venues between the regular Film South Asia Festivals that are held in Kathmandu once in two years. Outstanding festivals screened at this festival are then chosen to travel across the subcontinent.

In this spirit, the festival reflected the contradictions and the cinema of South Asia, with themes that moved from the first Afghan women’s football team (Afghan Girls Can Kick) to extremism in Pakistan’s madrassas (The Battle for Pakistan) and a woman’s struggle to hold her family together in post-tsunami Sri Lanka (Mayomi).

Even as South Asia experiences tremendous cultural and economic transformation, at the heart of change in all the region’s different countries and cultures seemed to be the question of family, spirituality and women’s role in society.

The films being screened from India were a tiny reflection of the country’s tremendous diversity. Out of Thin Air is a look into the little known Ladakhi film industry, Saamam is a tribute to Carnatic music legend M D Ramanathan and The Salt Stories re-told the story of the Dandi March. As culture met history on the silver screen, it was an interesting perspective into the lesser known facets of the Indian experience.

Elsewhere in Bangalore, Bollywood films Dhobi Ghat and Turning 30! opened in cinema halls. In their own diametrically opposite ways, both films marked important points for Hindi and Indian cinema.

Munna stands dejectedly against a closed door. On the other, the woman he loves sits with a man who is clearly his social superior. It’s a moment that has been placed many times before on celluloid. But this time instead of focusing on the pain on the actor’s face, the camera zooms to place his frame against a closed door – devastated, alone, the picture of complete desolation.

As the most recent film from Aamir Khan Productions, director Kiran Rao’s debut Dhobi Ghat has been watched with anticipation. The film does not disappoint as experimentation finds its place alongside a fresh perspective told in a sensitive voice.

The film looks at Mumbai through a kaleidoscopic view, uncovering variations of the city’s many hues. Told in documentary style, it creates intersection points in the lives of four Mumbaikers and their story. While it reflects individual angst, Dhobi Ghat also honestly etches on celluloid the spirit of a great Indian city. Yet even as many flinched at the display of Mumbai’s poverty in Slumdog Millionaire, the gentleness and compassion of this director’s lens perhaps stills our protests. Here poverty exists as itself, and not a spectacle.

Amongst Dhobi Ghat’s many experiments in the film that work well are the film’s duration of just 90 minutes and the choice of Argentnian Gustavo Santaolalla for the film’s musical score.

Dhobi Ghat is also a casting coup for Kiran, as she puts together a talented cast that includes Prateik Babbar, Aamir Khan, Monica Dogra and Kriti Malhotra, each uniquely suited for their part.

It’s another good performance from Prateik Babbar (as the dhobi Munna), who continues to shine with the shades of brilliance we saw in his brief appearance in Jaane Tu Ya Jaane Na. But of all the directors who have worked with Aamir, few handle him better than Kiran. Aamir has always been known to be an actor who places himself behind the interest of the script and the films. But not many have used that quality with the same confidence and wisdom that Kiran does. His presence elevates the film, yet the film is in no way searching to accommodate itself alongside the crevices of Aamir’s stardom. Instead it is Aamir who must fit himself into the film, and he easily finds his place.

If Dhobi Ghat could be faulted on any score, it is only on the loose editing that sometimes makes the audience complain about the film’s slow pace. The power of the story telling of films created at intersection points exists in exemplary editing. This is sometimes missing from Dhobi Ghat. Yet it’s also true that to change the narrative pace of this film would have been to make a different movie.

So it’s a rating of 3 on 5 for Dhobi Ghat. Unusual, intense, a complete film. But in times to come, it will perhaps most be remembered as the film that announced to Hindi cinema that the director Kiran Rao has arrived.

Turning 30! may not be many things. But director Alankrita Shrivastava’s debut film is certainly Hindi cinema’s first chick flick, told Bollywood style. Made through an unusual combination with Prakash Jha as producer (in a non-political mode), the films predictable moments and lines to create an original script. 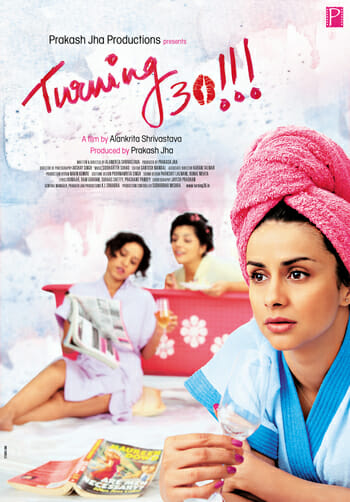 Chick flick with a Bollywood spin

The film stands out not because it tells us anything that we don’t already know, but because in the tradition that began almost a decade ago with films like Dil Chahta Hai, it takes all these familiar moments from an urban youthful existence and puts them up on celluloid. So you’ve heard it all before, and yet you find that this is cinema that you can relate with.

Turning 30!  follows Naina’s (Gul Panag) many adventures (or misadventures) as she makes her way through a troubled relationship and career, even as she reaches that huge milestone of ‘turning 30′.

Music from Sidharth-Suhas (who had earlier composed the music for Dil Dosti and Bhram) sets the film’s youthful contemporary context.

Gul Panag is a credible Naina. Yet both the film and its actors really find their flow only in the second half of the film. Even while it draws laughs along the way, the film finally reaches its very predictable conclusion, leaving the audience only with a sense of deja vu.

So I would go with a rating of 2.5 for Turning 30! Not always original, but in true chick flick style, it’s an entertaining one time watch at the movies.

Four contestants for the Gangenahalli ward met citizens and talked about a variety of local concerns from skywalks, playgrounds, stray dogs and cleanliness.

The Commissioner has constituted a committee to investigate the issue, even as most corporators demanded that A Khata be given to all Revenue sites, in violation of rules.

Play is more fun at the newly renovated Jayanagar playground

This playground is all swanky now with a large area marked for sports and an auditorium to hold events. Transport Minister R Ashoka inaugurated it.