The Karnataka bandh on Saturday disrupted normal life in Bengaluru.  On Friday, 21st January, Karnataka Governor H R Bhardwaj’s gave his sanction to initate prosecution of Chief Minister B S Yeddyurappa of the BJP on allegations of the latter’s involvement in several land scam cases. The party announced the bandh in protest.

"Sixty six BMTC buses have been damaged across the city including one volvo bus and a Marco polo bus," said K S Vishwanath, Chief Traffic Manager (Operations) at BMTC.  "However there are no casualties reported on staff members", he said. 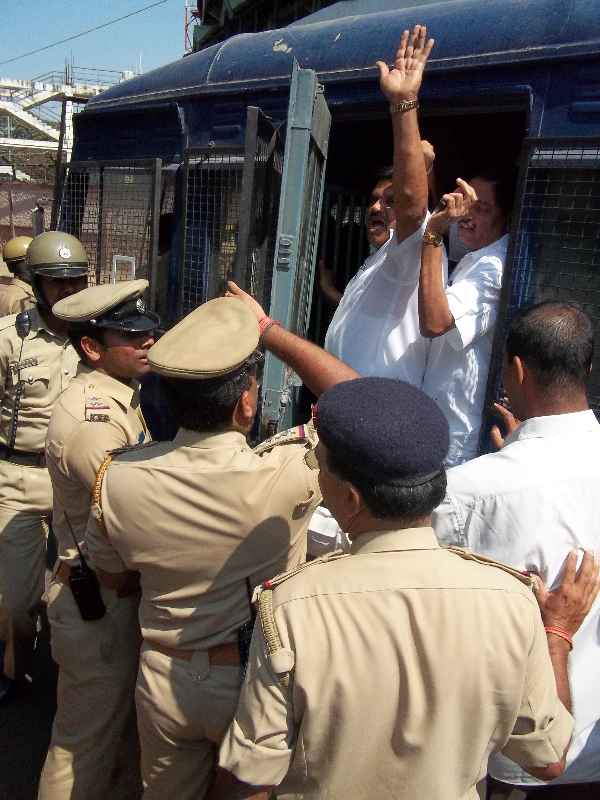 Several BJP supporters protested in front of Gandhi statue on M.G. Road and raised slogan against the Karnataka Governor Bharadwaj. Bharadwaj was an agent of Sonia Gandhi, they shouted.

"Around 500 people have been arrested under section 71 of the Karnataka Police Act, to maintain law and order," said G Ramesh, Deputy Commissioner of Police, central division.  "MLC Ashwath Narayan along with two MLAs M Srinivas and Vijay Kumar were arrested too" he added.

During the protest the BJP supporters were flouting the traffic rules and riding the vehicles on footpath. The police were standing helpless on M.G.Road.

Early Saturday morning, thousands of commuters were left stranded at the bus terminus at the usually chaotic Kempegowda bus stand in Majestic. The Bangalore Metropolitan Transport Corporation‘s  (BMTC) had made an unannounced decision to not operate the usual number of buses, in response to the state-wide bandh called by the ruling BJP. The 6000 odd fleet of BMTC buses which make close to 80,000 trips a day, on Saturday, operated a bus for every route once every few hours. BMTC buses were off the roads in most of the places until 6.00 pm.

Mallesh Gowda, 39, a resident of Srinagar and a daily wage labourer could not reach the place of his work on Old Airport road due to the bandh. Waiting since eight in the morning, he had still not been able to board a bus at ten thirty. "I got a bus from Srinagar to Majestic but no buses from here. They sold us daily passes without even informing us of the buses not operating today. BMTC should reimburse the pass money as we are coolies. Not only am I losing a day’s pay but I am also losing the pass money", he said. 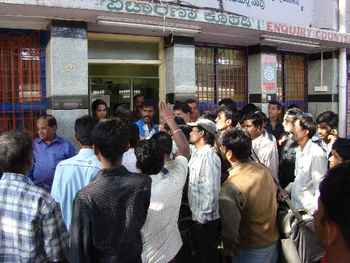 Angry commuters protesting and demanding reimbursement at the BMTC enquiry
counter against being sold passes as buses were not being operated. Pic: Yogaraj Mudalgi.

Another commuter, Venkatesh Kumar too suffered the same woes. "I have been waiting to go to work in a factory in K R Puram since seven in the morning but there are no buses. I am losing a day’s pay because of politicians’ apathy", said Venkatesh

The move to ply few buses came unannounced and left many commuters in shock as normal life was thrown out of gear. Workers, students and tourists alike were left with no option but to wait for hours to catch a bus to their destination. Many schools and colleges remained closed and the streets were looking deserted.

Tourists who had arrived in the city too were in for a rude shock as they found the central bus terminal empty of buses. Chidanand Patil, who came to the city with his wife and two kids on Satruday morning from Bijapur through a KSRTC bus, was left waiting for a bus to Jigani since 5 o’clock in the morning. "We had no idea they were going to stop operating buses, we would have concelled otherwise. Autorickshaws are asking for exorbitant sums of money to go Jigani and extra for the luggage. We cannot afford it. The authorities are not providing any information properly either. We don’t know how long we are going to be stuck here", said Chidanand.

Many passengers who had bought daily buses uninformed of the buses not plying demanded they be reimbursed. BMTC officials at the bus terminus only gave them tentative assurances about reimbursement. Officials present there denied commenting on the issue when asked Citizen Matters asked for a response.

The usually crowded K R Market looked deserted and the street hawkers had a tough life without enough business.

Protesters set vehicle tyres on fire at a junction on Bannerghatta Road early morning. Traffic was diverted by the traffic police quickly but the tyres continue to burn till afternoon. Traffic resumed to normalcy by late afternoon. 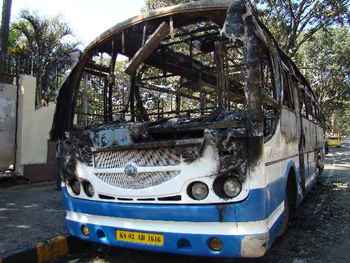 Even before the bandh began, a private bus parked on a road in 9th Block Jayanagar, was gutted by unidentified miscreants. Keshav Chettri, 34, who works as a security at a construction site nearby was woken up by a loud blast only to see a bus set on fire. "The bus was parked very close to a truck with LPG cylinders in it. Along with another school bus close by, the two were quickly moved away so that the fires would not spread. Luckily the fires did not set the LPG cylinders on fire as it would have been a huge disaster and claimed several lives", he said. The fire brigade swiftly extinguished the burning bus, he added.

Three years ago when Sampath Ramanujam, Founder of Anvaya Foundation travelled to Kaiwara, along with his family, he met two girls who were playing happily with a fully damaged cycle with no bell, no brake

All you need to know about Ward 19 – Sanjay Nagar

What has happened in Sanjay Nagar ward in the past five years? What are the problems and what has BBMP done to fix them? Who is contesting in the upcoming polls?