Five private layouts that were approved by the BDA in Bangalore East, Sheegehalli panchayat near Whitefield, are in a quandary on whom to collect Khatas from. The layouts do not fall under BBMP limits and both panchayat and BDA insist that they have the right to collect taxes from the residents.

The authorisation letter says that BDA had transferred all its layouts to BBMP in October 2007 as per a Government Order on May 5, 2007; but since some layouts did not come under BBMP, BDA will collect taxes from these property owners, for the owners’ convenience.

It also says that the properties will be handed over to the panchayat when µthe government issues an order for it. Before 2007, BDA had been collecting taxes from layouts. The letter says that BDA can collect taxes accounted from 2007.

But last December, the panchayat officials shot off a letter to the residents saying that the claims made by the BDA officer is false, and that panchayat can collect taxes as per the Karnataka Panchayat Raj Act 1993. The letter also says that in case of default of payment, the panchayat can stop registration of properties and withdraw the non-objection certificate given for electricity connection. The letter was signed by Panchayat Development Officer Amrish Kumar and Panchayat President Savitha K.

The residents are in a fix as to whom they should pay taxes to. Raghavendra Rao, President of the owners’ association at the BDA-approved Chaithanya Samparpan layout, says that they have not paid taxes yet, owing to the confusion. The layout was formed in 2004 and residents moved in 2007. "We have been meeting BDA officials for over a year to get khatas, they had said that our layout does not come under their jurisdiction. Panchayat was open to collecting taxes then, but the khata rates they fixed were very high compared to BDA rates – they demanded around Rs 10,000 per person. They were also open to negotiation, which means that the rates were not fixed," he says.

Sheegehalli Panchayat Development Officer Amrish Kumar says that according to Panchayat Raj Act, a maximum of 1% of the property value can be charged for transfer of khatas to residents. BBMP charges much lesser – it levies 2% of the stamp duty paid during sale, plus additional charges not higher than Rs 200.

BDA on the other hand isn’t sure if khatas issued by the Panchayath is even valid. B V Ramalingaiah, BDA (East) RO, says, "Panchayatas are not authorised to collect taxes. We cannot say if their khatas would be valid. We have served notices to more than 500 houses in these layouts, residents are yet to submit the tax forms."

Raghavendra Rao says that some residents are ready to collect khatas from panchayats when they have to sell their property. T Ramesh, former owner of a site at Chaithanya Samarpan, says that he had paid property taxes and got khatas from the panchayat during the sale of his property about 6 months back.

"The Registrar at KR Puram said that I had to get khata from the panchayat office to register the sale. I paid the exact amounts as prescribed by panchayat officials – both for property tax and for khata." Ramesh says that he was not even aware of the possibility of getting a BDA khata.  Raghu Mariyappan, who bought the site from Ramesh, also says that he is not aware of BDA issuing khatas. "I have been trying to get my khata from the panchayat after the sale," he says. 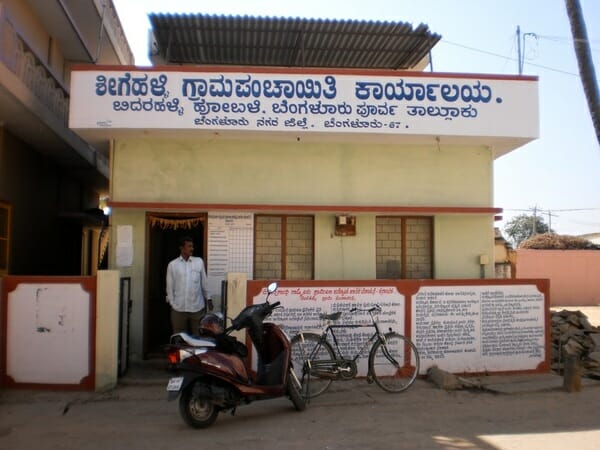 Both BDA and panchayat officials say that they need to collect taxes for developmental works. Panchayat President Savitha, who had co-signed the letter asking residents to pay up, however is not sure of her reasons for doing so. She instead pointed to her husband for explanation. "BDA sent a letter to residents, so we also sent a letter. About the reason for demanding taxes, you can ask my husband, his opinion is my opinion," Savitha said. Savitha’s husband Suresh Babu, handing over a copy of the letter at the panchayat office to Citizen Matters, clarified that apartment complexes are the main sources of revenue for the panchayat. "We need this revenue to undertake works in the panchayat. We fix the tax rates accordingly," he says.

State Advocate-General Ashok Harenahalli says that BDA is entitled to collect taxes from layouts approved by it, as per BDA Act, 1976. "Developmental works inside the layout is also BDA’s responsibility. Usually BDA layouts are transferred to BBMP and not to panchayat, so until BBMP extends its limits to include the village or the layouts are specifically handed over to BBMP, BDA has authority over them. But BDA does accept panchayat khatas as valid," he says.

In other BDA divisions, the ROs say that taxes are being collected from private layouts, without any opposition. Dhanalakshmi, RO for West division, says that there are eight layouts – Sir M Visveswaraya layout block 1 to 8 near Kengeri – under panchayat area, in her division. "We started collecting taxes from them after the 2010 authorization. Residents have been paying taxes accounting from 2007. I don’t know about any opposition from the panchayat." Same situation prevails in South and North divisions too. ⊕

Traders say no to mall on their santhe maidana

Cash strapped BBMP is pushing for a commercial complex at K R Puram’s santhe maidana. Farmers and traders using the space to do business aren’t happy about it.

Carnatic music is gaining popularity in Bengaluru with more and more music lovers thronging at the music concerts held at various parts of the city throughout the year.

Is Cauvery water coming to your area in 2012?

If you are wondering how 500 million litres per day of the Cauvery’s last allowed run of water for parched Bangalore is going to be distributed next year, don’t miss this article. Your area could be in there.