Recently, a Public Interest Litigation (PIL) against the Revised Master Plan – 2015 (RMP), or the Comprehensive Development Plan (CDP) for the Bangalore Metropolitan Region (BMR) was admitted in the Karnataka High Court. The PIL was filed by the Citizens’ Action Forum (CAF), the Sadashivnagar Residents’ Welfare Association (SRWA) and 12 distinguished citizens against the Bangalore Development Authority (BDA), for disregarding public sentiments and expert opinion and going ahead with the RMP in its present form.

The petitioners have charged that the BDA had clearly overreached its powers in formulating the RMP while the Bangalore Metropolitan Regional Development Authority (BMRDA) had failed to exercise the power vested in it to ensure proper and orderly development of the city, which "directly affected the rights of the citizens and residents of Bangalore."

The State of Karnataka is the first respondent in the case while the BDA and BMRDA are the second and third respondents respectively. The state government, which is the approving authority for the RMP, had approved and confirmed the plan through its order dated 25.06.2007.

As noted earlier, the list of petitioners is reads like a veritable who’s who of Bangalore’s eminent and concerned citizenry – secretaries of active citizens’ fora and major residents welfare associations, retired former CEOs, retired top scientists and public sector executives, retired central, state bureaucrats and defence officials, and others. Notably, many of them are from HAL 2nd Stage. They are:

The petitioners have pointed out that after the enactment of the BMRDA Act, local planning authorities like the BDA cannot independently formulate and undertake development work without the approval of the BMRDA. In fact, the Karnataka Town and Country Planning Act was amended to make the BMRDA the ‘Director of Town Planning’ through which any CDP is submitted to the state government for approval.

Under the KTCP Act, the Comprehensive Development Plan (CDP) for Bangalore has to be revised every 10 years. The last CDP was sanctioned in January 1995 and therefore a revision was due by 2005-06. This resulted in the current RMP – 2015.

A little bit of history is helpful to understand how the distinguished petitioners have raised their question about the distinction between the BDA and BMRDA.

The BDA was constituted by the state government as a local ‘planning authority’ for Bangalore city in 1976. It draws its legal status from the BDA Act and the KTCP Act.

However, the BMRDA was created under the BMRDA Act (1985), as the prime authority for the planning, coordinating and supervising the proper and orderly development of the area within the BMR. This was done to ensure proper coordination between various local bodies like the BDA, the Bangalore Water Supply and Sewerage Board (BWSSB), the Karnataka Electricity Board (KEB), the Karnataka State Road Transport Corporation (KSRTC), Karnataka Slum Clearance Board and the Bangalore City Corporation (BMP), especially in the matters of planned development, housing etc.

The functions of the BMRDA included, among other things, "The preparation of a structure plan for the development of BMR." It was given the power to formulate as many schemes as found necessary for implementing the structure plan.

It is important to note that the BMRDA Act also lays down that no person or authority shall undertake any development in any region without its prior permission. In the event of a dispute between it and any other bodies, only the state government has the power to overrule the directions of the BMRDA.

In the case of RMP-2015, the BDA took it upon itself to prepare the master plan with the help of a French consultancy firm, M/s. SCE, flouting the BMRDA Act of 1985, say the petitioners. It published The Draft Master Plan on 22 June 2005, inviting objections/suggestions from the general public. Despite the short response period given, citizens filed approximately 7,200 objections. 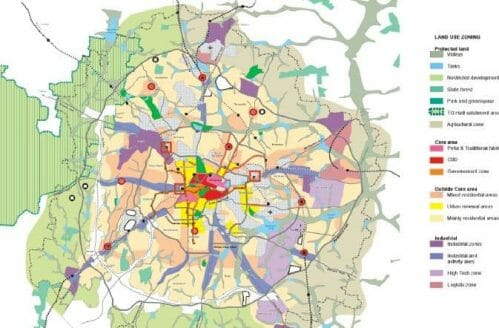 Subsequently, a ‘Review Committee’ of experts, headed by IAS officer P S S Thomas, Former Advisor, Planning Commission, was appointed to interact with the public and also to give its own recommendations, which the committee did.

The Thomas Committee report had several reservations about the Draft Master Plan and disagreed with proposals regarding the zonal regulations, introduction of mixed residential areas under the guise of development of commercial space, designation of main corridors and even main roads in residential areas as commercial axes, and other zoning matters leading to automatic regularisation of violations, etc.

The petitioners have stated that the BDA ‘blatantly overlooked’ most of these recommendations in its final RMP turning the whole exercise of inviting objections and suggestions into an eyewash.

Moreover, the BMRDA sent back the Draft Master Plan to the BDA with its own recommendations, and rejected some of the BDA’s proposals. On 9 March 2007, the state government constituted a ‘Core Group’ to furnish recommendations to the government. Three months later, in a letter dated 22-06-2007 to the BDA, the Principal Secretary to the state government sought changes to the RMP. On the very next day, the BDA replied with the assurance that the changes have been incorporated, but failed to do so, say the petitioners.

The petitioners have contended that, subsequently, the state government approved the RMP ignoring the fact that the BDA had not taken into consideration the ground realities of the city, the recommendations of the committee nor the recommendations of the BMRDA, and even the genuine grievances and reactions of the citizens of Bangalore. Further, the petitioners have said that the BMRDA was also guilty of not exercising the faith and powers vested in it as ‘Director of Town Planning’, by the BMRDA Act of 1985.

The petitioners have argued that the BDA’s action violates Article 14 of the Constitution (Equal protection before the law), as the RMP "…is an acknowledgment of all the violations that have taken place in the past several years". It is seen as an attempt to legalise and further perpetuate the chaos created by land use violations in residential, valley and green belt areas.

Presenting several annexures to the petition, the petitioners have contended that the RMP, besides being violative of the basic tenets of town planning, also violates several other rules and recommendations of other committees constituted and accepted by the earlier state governments. Among other things, the plan is a threat to the fundamental ‘right to life’ enshrined in Article 21 of the Constitution of India, by causing pollution, threat to ecology and environment (by reduction of green belt area from 56 per cent in 1995 to a mere 35 per cent), permission for ancillary activities in residential areas leading to public inconvenience, stress, and lack of peace and comfort, say the petitioners.

The petitioners have attached minutes of the state cabinet meeting held to approve the plan which reveals that the BDA had chosen to ignore all objections to the plan and had mechanically forwarded the RMP to the government for approval and the state government had further mechanically granted the approval without considering the interests of the citizens.

Based on these arguments, the petitioners have charged that the RMP – 2015 and its approval by the state government are ‘illegal, without jurisdiction, arbitrary, mala fide (in bad faith), unconstitutional and ultra vires (beyond its powers)’. Contrary to the Town Planning Act and the BMRDA Act, the BDA had usurped and exercised unbridled power in formulating the Revised Master Plan, 2015. It had failed to take public interest into account and due processes required by law, say the petitioners.

The petitioners have alleged that various real estate lobbies pressurised the state government to bypass the checks and balances provided by zoning in order to protect their commercial interests.

The petitioners have asked for an interim stay order till final disposal of the case, since the BDA has already started implementing the RMP. In the final order, the petitioners have requested the court to quash the RMP-2015 in its present form, and sought reformulation of the RMP in the light of the Thomas Committee recommendations.

Since the admission of the PIL in March, the government had sought time to file its reply at the last hearing, which was held on 31 March. Since then though, there have been no hearings. ⊕

Bangalore is supposed to get Metropolitan Planning Committee in place as soon as possible. But the question is, does the proposal address the concerns that led to the formation of this body.

The Karnataka State Remote Sensing Application Centre has said that ground altitude of Raheja Vivarea apartment at Koramangala is 892 metres. Using this, HAL is arguing that Raheja Vivarea cannot be constructed beyond 13 floors.

Bengaluru’s stormwater drains are designed badly, violating all guidelines. Desilting and maintenance are rarely done. That the city floods is no surprise!