Even as the IT city swells and rips out of its infrastructure, there are small bands of earnest and committed residents that are trying very hard to effect local patch-up jobs.

All over the city, colony federations are beginning to take up issues, address concerns and battle for local rights. Citizens’ awareness is rearing its head, even though some may say that it has not made its presence felt in a major way.

Any of the local associations is an interesting microcosm of the city’s concerns. Take the relatively new and IT-centric colony of Hosur Sarjapur Road (HSR) Layout, for instance. Located in the southeast region of the city between Hosur Road and Sarjapur Layout, it adjoins Koramangala and BTM Layout. The area was developed as a residential location in 1984 by the Bangalore Development Area (BDA), but its real development started only after 2000.

There are seven sectors in the colony addressed by a federation, composed of seven residents associations—one for each of the seven sectors. Every association sends a member from its local body. The Federation takes up challenges that concern the entire colony, and puts pressure on the individual associations when there is delay in work.

A quick survey of the Sector II Residents’ Association proves that it reflects the characteristics and make-up of the entire colony. The members are middle class, and from fairly well-educated families. There is a retired army officer, a coffee grower, and employees of SKF and Wipro among the office bearers. They are aware of some of the civic issues that are necessary for a well-oiled colony to work smoothly. “We have been very vocal about the importance of parks, street lighting, tarring of roads and garbage collection,” says Chennakeshav, the Secretary of the association, proudly.

"The richer classes, especially is not willing to even shell out Rs.25 a month for the door-to-door garbage collection that we have initiated."

Though the association is only five years old, it is fairly active. It meets on alternate weekends in a park, discusses various matters pertaining to the development of the colony, and even brings out an annual brochure. There is an election after the end of each financial year. The age group of the office bearers appears to be mostly from the 35 to 60 years range, almost all male.

The single issue that concerns most of the members, of course, is the twin frustration of delay and apathy in government officials, as well as the local people.

We have been beating against the wall,” says (Retd) Brig. R.S. Murthy, the President of the association. “I am sorry to say that while we find a lot of response from the lower classes, such as the local rep, and even the sweeper, I haven’t found the same kind of response or direction from the higher ups in the government, such as the Commissioner, or the Director.” There is no local corporator, while the MLA and MP are as good as absent too.

The latest issue of importance is a piece of prime land, which the local association has been asking to develop as a lung space between 19th and 20th Main, Sector II, next to a Water Tank opposite the Cambridge Public School playground. “We want it to be developed into a park, or sports playground, or forest,” says Brig Murthy. “But there appear to be elements that are determined to develop it into a commercial place. We have contacted higher officials in the BDA and BMP, but we only faced delay everywhere.” 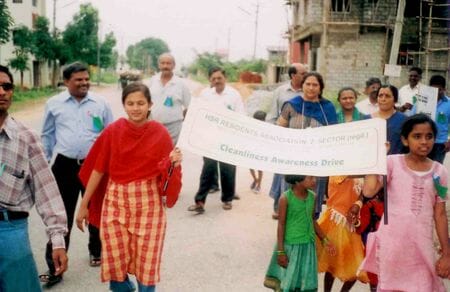 Another issue of concern is the problem of drainage, and uncleaned garbage. “As the rains are coming, we may face the same kind of floods that we faced a couple of years ago,” says N. Rajagopal, the ex-Secretary. “But though we have made our presentations, we have got no response.”

Clearly the sense of ownership amongst these residents – noticed all over the city as well – is a step out and forward from the lethargy and insularity that usually marks the Indian outlook. However, socially relevant concerns that touch migrant workers, child labour, government schools or cheap public toilets for the poor, have not yet touched the members.

“Oh, don’t even ask for such things,” says another office bearer. “If we try to get free drinking water for migrant laborers, for instance, they will park themselves here permanently, and create a nuisance.”

Thus, the ‘me-centric’ concerns of the members mirrors the classic conflict that characterizes the typical approach of the stratified Indian society. ‘Creating a nuisance’ is also the standard phrase that defines the ‘outsider’. The message that is beamed out is: The colony is ‘ours’, the typical middle-class IT-family.

Coming to the core concerns of the association, even within their active community, challenges remain. There is, for instance, frustration and bewilderment at the indifference of fellow residents. Why, they ask, they so unresponsive to issues that touch their lives, and for which the association works so tirelessly? “They are so lethargic that they do not even complain about an issue such as lack of water connection,” said James Tharakan. “They expect that the association should do all the work and achieve everything for them.” They are unable to accept that people could be too ‘busy’ to participate. “Aren’t we all busy?” he points out. “And yet, don’t we make time?”

While the citizens expect to enjoy the benefits of a federation of this type, they are not even ready to share the burden of funding it. “The richer classes, especially,” says N. Rajagopal, “is not willing to even shell out Rs.25 a month for the door-to-door garbage collection that we have initiated.”

This was confirmed by Gopal Reddy, a resident. “Our servants collect and dispose of our garbage; so why should I pay the monthly fees?” he asks.
A quick interview of other citizens made one or two issues clear. Firstly, many are not aware of the existence of such an association. Secondly, even if they know about it, they are not interested in lending their voice, support or money to it. Thirdly, many people are quick to voice complaints against it. As Anuradha Sriram put it: “If the association exists, it must be getting funds from somewhere. So it should jolly well do its work.”

In the association itself, though, the mood is still upbeat. The members concede that their success is not due to the active participation of people, but due to the contribution of a small but dedicated group of people. The only way of seeing more action, explains Chennakeshava, is to have residents participating actively. He points out that the members of the association knock from door to door to explain and draw in new members. However, the majority of the residents is interested in results, but refuses to compromise on its time and energy levels! Still, the hope is to continue to raise awareness. “I would rate our association an average success,” says James Tharakan. “However, we are striving to take it to the above average level.”

Bringing cauvery to Bengaluru costs a whopping 300 crore rupees a year. But if the leakages are plugged and water is treated more efficiently, the city may not need to wait for Cauvery.

CycleToWork Fridays: Bengaluru cyclists to show strength in numbers once a week

As part of a new initiative ‘CycleToWork Fridays’, cyclists in the city will ride to work together every Friday. A broader coalition to promote cycling will be launched in the city on November 6