If you are living in gated community – be it apartments or a layout with independent homes- did you know that your builder would have had to relinquish the parks (you paid for) to get the layout plan sanctioned?

Bengaluru’s townplanning rulebook says apartment complexes with an area more that 20,000 square metres must relinquish parks to public. Likewise layouts – whether ‘gated’ or not – have to relinquish parks to the public too. While some layouts have relinquished albeit reluctantly, some have sued the BDA for it and some are clueless about a rule like this. Authorities on the other hand continue react on a case-to-case basis with no clear-cut policy on implementation. 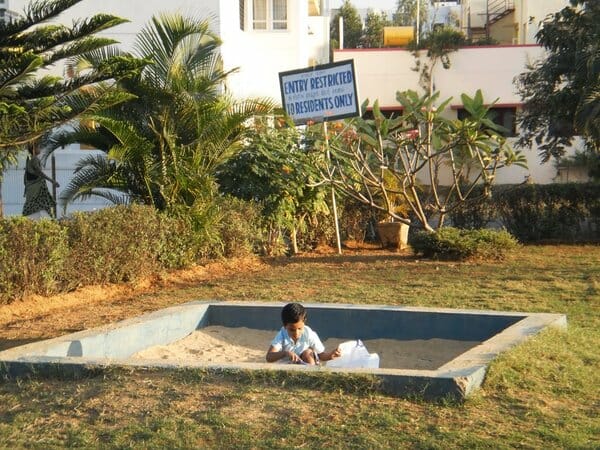 According to the Comprehensive Development Plan (CDP) 2015, Residential Development Plans (RDP) should relinquish 10% of their land for parks and open spaces, while layouts should relinquish 15% of their area for the same. While some communities allow the public to use the parks with some restrictions, others do not allow public in at all. RDPs are apartment complexes with area greater than 20,000 sq.ms. In Bengaluru’s CDP RDPs are different from layouts.

Take a walk in the parks in M S Ramaiah South City in JP Nagar on an evening.  You are likely find very few non-residents using the park. Legally, the park is public as it was relinquished to BDA while obtaining plan sanction for the layout. It is now supposed to be a BBMP park, as BDA handed over the layout to the Palike in 2007.

But among the five parks in the 45-acre layout, some still have boards that say ‘Entry restricted: To residents only’. Mainly the residents use the parks, though there would be couple of outsiders during the evenings. A visitor, who was not a resident of the layout, said, "You can use the park, but it is the residents’ property. If they ask you to leave, you have to go." Another said that he was not sure if he could use the park.

There are no security guards restricting entry, but it is apparent that non-residents are not encouraged to use the park. A resident of the layout says, "It is the residents’ property, but it is your decision as an outsider, you have to think about whether it is right of you to use the park."

KHVR Sagar Holla, General Secretary of the layout’s RWA, says that the boards restricting entry would be removed, and that the residents are accepting of outsiders now. "Earlier many residents were ignorant of the rules. Now we are educating them about this. We do not place any restrictions on public using the park, but after 10 pm those who use the parks and internal roads would be questioned by security guards," he says. There is also fear among residents as incidents of chain snatching and robbery have occurred there recently.

The residents’ reluctance to open the park to public is not just due to security concerns, but also because the park is still maintained by them, with very little help from government agencies. RWA member Eswaraiah says that the residents spend around Rs 50,000 per month for maintaining the parks – this includes gardening, pumping of borewell water for watering lawns etc. Holla says that BBMP’s Horticulture Department had once supplied 400 saplings for planting in the parks, but that there has been no other support.

Unlike MS Ramaiah South City, many layouts and RDPs in the city do not allow public to use their parks at all. For example layouts like Chaithanya Samarpan and Akshaya Red Stone in Kadugodi, adjoining Whitefield, restrict public in parks.

RDPs like Brigade Millennium and L&T South City in Puttenahalli, also place such restrictions. R Rajagopalan, Vice-President of the L&T South City’s apartment owners association SUGRUHA, says that maintenance required would be higher if park is opened to public. "There would be vendors too, especially since the park in complexes like ours and Brigade Millennium’s are located along the internal road marked for public use. In MS Ramaiah South City, the parks are located away from the thoroughfare; many people do not even know about parks inside the layout," he says.

RDPs and layouts are different

Also, in RDPs, the parks are usually the only patch of green in the middle of high-rise apartments. This is unlike Ramaiah City, which has only independent houses in its 300 occupied sites. Also residents in Ramaiah City are required to pay only Rs 325-650 for common area maintenance per month, which is much lesser than what residents of apartment complexes pay.

BDA also appears to give more freedom to RDPs than layouts with respect to park maintenance. E Imbavalli, Technical Assistant (Banglore North), says, "In layouts, parks by default come under the BDA; the RWA can maintain those only if BDA lets them. In layouts like MS Ramaiah North City (Nagwara), HBCS layout and Vyalikaval layout, BDA itself maintains parks, not RWAs. But in RDPs, residents can maintain the park and restrict timings for public use."

BDA Commissioner Bharat Lal Meena says that residents have first rights over parks. But he adds that "Parks are government property and residents cannot stop public from using it. But they can put restrictions to ensure security."

Meena’s statement seems to be only a subjective interpretation of the law. The CDP does not mention anything about the extent of authority residents can have on relinquished property; it only says that residents can maintain these spaces with BDA’s permission.

In some layouts, the park area remains undeveloped as it is ignored after relinquishment. In Amar Jyothi layout in Domlur, three sites were relinquished – one for park and two for civic amenities. All three areas are abandoned or occupied by encroachers. "Neither civic authorities nor residents are enthusiastic about developing these areas," says Prabhakar Alva, former President of layout RWA.

In Panduranga Nagar layout off Bannerghatta road, the park area had remained abandoned for over two decades, until the RWA started developing the park two years back with Rs 1 lakh. They also appointed a staff to maintain the park. Due to fund constraints, they sought support from a BBMP Corporator.

"After this, the BBMP started developing the park. Almost 75% of the work is complete now. BBMP has appointed its own staff for maintenance; so we have no control over the park at all, but we do not mind, as it is developed," says Parameshwar Bhat, Secretary of the layout’s RWA.

No coherent view within BDA

If parks are going to be have to be relinquished anyway, who should be developing them? The private developer of the layout (builder) or the BDA, which sanctions the RDPs an and layouts? Even within the BDA, there isn’t coherent view on the law.

BDA’s Technical Assistants and Commissioner Meena also have different interpretations of the CDP, regarding whether parks should be developed with residents’ money. Imbavalli says that builders of layouts/RDPs only have to relinquish the area marked for parks and not necessarily develop them, to get plan sanction. But Meena, and BDA Town Planning Member S S Topgi, say that builders have to plant trees and fence the area.

Meena says, "When the builder develops the entire area, how can they leave out only the park area? If not them, who will spend the money for that?" he asks.

Rajesh, PRO at Chaithanya Builders, says, "BDA does not develop the park area after relinquishment. So eventually we develop it and hand it over to residents. Residents have no ownership; they only have the rights to use it."

Buyers of homes or plots, who bear the cost of building and maintaining the park too, are often not aware of relinquishment. Later and not surprisingly, they resist opening up parks to public. Meena does not address this concern. The only reason some of such layouts appear to let the public use their parks is that the law demands it.

In the case of L&T South City though, the apartment owners are contesting the ownership of the park itself, as the relinquishment was not mentioned in the sale documents.

Real estate agent Santosh Bhurani says that relinquishment has not yet emerged as an issue. "Builders keep quiet about relinquishment as the rule is still on paper only. BDA does not insist on letting public use parks either. In layouts BDA might interfere, but in RDPs it is assumed to be private property," he says.

Sudarshan, Technical Assistant (Bangalore South) in BDA confirms this. He says that the rules are not insisted on as BDA got the land from residents in the first place. "We have not got any complaints from public about not being able to use parks. If you want to use the park you can, who is stopping you?"

Raghavendra Rao, President of Chaithanya Samparpan Owners Welfare Association (CSOWA), says that the residents would be willing to pay higher taxes to retain the parks for themselves rather than open it to public.

Architect and consultant Mohan Rao says that it is BMRDA’s (Bangalore Metropolitan Region Development Authority) responsibility to develop a plan for integrating parks. Rao runs an a design firm called InDe from Jayanagar. His latest work includes planning for the city of Surat.

"BDA gives sanction by looking at the numbers only; the vision should be BMRDA’s. Many ‘gated communities’ are 4-5 acres of land and the parks here are small patches compared to the city’s landscape. Relinquishing them does not serve any purpose; such spaces should be integrated to form a larger green space for the public."

Layouts are not islands, they should be developed by considering the realities in the neighbouring areas, says Rao

Catch them young, make them healthy

Meet Aparna and Rajeshwari, who have taken it upon themselves to get children learn and practice healthy food habits, all in a fun way.

Suggestions given by the Citizens’ Action Forum to the government on revision of property tax through continuous interaction with the political parties, the administration and the citizens.

Workplace only for differently-abled