18-year old Aaron D’Souza, based in Bangalore, is Karnataka’s fastest swimmer. He is currently in an intensive training programme in preparation for the London Olympics next year. D’Souza won 2 gold medals at the South Asian games in 2009 (Dhaka) and was a finalist in the 4×100 medley relay at the 2010 Asian Games (Guangzhou, China).

Rani Rampal is India’s unheralded hockey wondergirl. At 15, Rani has proved to be one of the best hockey players in India. She was the top goal scorer of the Women’s Hockey World Cup in 2010. Few know that Rani was so impressive that she was awarded the ‘best young player’ at the tournament. She has a connection to Bangalore too.

D’Souza and Rani are both supported by Bangalore-headquartered GoSports Foundation, a sports management organisation.  Like D’Souza and Rani, GoSports is supporting several other budding Indian athletes. GoSports was co-founded in 2006 by Bangalorean Hakimuddin Habibulla, who himself represented India in swimming at the 2000 Sydney Olympics. Hakimuddin Habibulla at his office

Habibulla runs GoSports Foundation out of Benson Town. A resident of Bangalore since childhood, he studied at St Joseph’s High school and later at BMS College of Engineering. He then worked at Tata Consultancy Services before he realised that even though he was past the time he could compete professionally, he still had a lot of passion for sports and the knowledge he gained as a swimmer could be put to better use by helping the younger generation succeed. So together with his schoolmates Nandan Kamath and Joseph Ollapally both Harvard graduates, he started GoSports.

While Bangalore may have made its name and fame as an information technology hub, for long the city has been a popular destination for athletes from all over India. Sportspersons come to Bangalore to train. The city has produced some first-class athletes in the likes of billiards champion Pankaj Advani and many others.

Citizen Matters caught up with Hakimuddin Habibulla to talk about sports and the city, what inspired him to start GoSports and more. Excerpts.

What triggered you to start GoSports?

Nandan and I have played sports during our college years but we both felt we couldn’t achieve 100% of our potential because of a lack of a proper support system. We had to constantly balance playing sports with academics as a sporting career was not as secure. We both had moved on to a successful career but we realised that we still had a burning desire to contribute to the sport in some form. We felt there was an absence of a system that can harness and promote sports talent in India. We wanted to create such an environment and started GoSports.

What does GoSports do exactly?

We provide several types of services to athletes. We take care of all the hurdles that an athlete might face so that he can be worry-free and concentrate on the most important thing that is, training. GoSports, looks after issues such as funding, finding the right coach and the right environment to train. We also create an emotional support system as sporting can some times get very lonely and can demotivate a person.  Rather can creating a one-off miracle; we want to create a pipeline of strong players. If you look at the top player and the second best in many sports, the gap between them is huge. We aim to bridge this gap.

Which national teams train in Bangalore? Can youngsters watch them?

Bangalore is one the best places in India to train. A lot of teams train in Bangalore. The city is a mecca for swimmers, there is the Prakash Padukone academy for badminton and Sports Authority of India has long been an excellent coaching centre. Most places do not have any restrictions on youngsters watching them train, except maybe for SAI due to administrative reasons. If an athlete is looking to train 365 days a year then the city has the perfect weather for it. This makes it more conducive for growth of talent.

What do you feel about the sense of sports in Bangalore? Are you seeing any changes in recent times?

Oh yes, definitely. A lot is changing in how people perceive sports. There are a lot more incentives now for youngsters to take up sport. Parents too understand that sports can be a viable career.

Tennis and football are on an upswing…Why do you think it is so?

If you take a closer look, soccer is saturated across Europe and most parts of the world. India, except for certain pockets, has largely remained an uncharted territory for football.  So, it becomes a commercial attraction and u can see an increase of promotion of football. In case of tennis too, it is not like as if the quality of the players has increased drastically, it is individuals like Somdev Devvarman or Sania Mirza, prior to him, who triggered an interest in the sport. 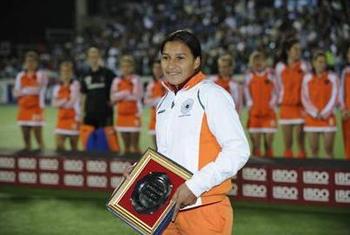 Rani Rampal, India’s hockey wondergirl who impressed everyone at the World Cup 2010 is supported by GoSports Foundation, Bangalore. Pic: GoSports.

Apart from Rani Rampal, who else is the GoSports foundation working with right now?

Currently we have 10 players on board with us. Five of them are swimmers, three badminton players and two women hockey players.

The Foundation is working with some of the best talents in the country including Prasanta Karmakar a disabled swimmer, who won a Bronze Medal in swimming at the Commonwealth Games, 2010, India’s first ever medal in aquatics at the Commonwealth Games. Virdhawal Khade, who won a bronze medal in the Men’s 50m Butterfly event at the Asian Games, 2010 is also being managed by GoSports. Both athletes live and train in Bangalore, under the eminent coach Nihar Ameen.

Is it a conscious decision to choose to promote talent from the lesser-known sports?

Absolutely. Apart from the fact that these sports are not promoted enough, another reason why we chose them is that if you take the example of any multi-sport event like the Common Wealth Games or the Olympics, the maximum number of medals can be won in athletics and swimming. If you look at this in terms of returns-of-investment, it is most profitable as one athlete can win several medals unlike team events where a team of 10-12 people win one medal.

Our athletes are still very young and it requires a lot of maturity to compete at an international level like the Olympics but what we are aiming to do is test the waters and use the event as a learning experience for our athletes. Any medals are most welcome but we will not put our athletes under any undue stress at this stage. ⊕

Green commuters: “I see no reason why I should not cycle to work ” – Karthik

With cities choking with air pollution, it is time to support environmentally sustainable commute to workplaces. ‘Cycle2work” is one such initiative.