When most citizens of Bangalore were wrapped up under blankets on a cold Saturday morning, 43 adventure lovers set out to cycle, kayak and go bouldering. Bangalore Adventure Race or BAR 101 kicked off from Turahalli, off Kanakapura Road, Southern Bangalore at 4.50 am. The participants cycled 50 kms to the Manchanbele reservoir to face more tasks to test their endurance.

The 15 teams made it to Manchanbele in about two hours. And plunged straight into trail biking, bouldering or Kayaking, depending on the tasks they felt most confident of.

The three-member teams had fancy names like Hot chocolate, Power of Chi, Crazy Climbers, Blue Blood, Rapid Shooters and Fundoo Shiva. The only agenda for the day was to complete all the tasks and have fun. The timing or the ‘race’ seemed the least of their concern. There was even a one-man team ‘Solo Shifter’ who actually completed all the tasks by himself.

Nearly 30 volunteers showed up just because ‘it is fun’ . The volunteers were there taking pictures, recording the time, helping them get in to the kayaks and generally cheer them on. Most participants are regulars at such adventure outings. Gaurav, a young adventure enthusiast says, "I’d like it if there are more such events." Ask him why he does this and he says it is hard to explain, it is "just for kicks".

The participants didn’t seem troubled by bruised fingers, scraped knees or the scorching heat. They were happy to be out there pushing the limits.

Shyam, owns an outbound training company. He doesn’t cycle, Kayak or go bouldering, just runs marathons. But decided to join in anyway when his cycling/kayaking friends decided to take part. Many participants seemed unfazed that it was their first time Kayaking. Neha Rawat, a young IT professional, decided to jump in because her brother wanted a team member and having a woman on the team fetched you additional ten points. She had never done any of the tasks ever before but she says “I loved it. It is a great way to spend your Saturday. Of the 14 teams, four included a woman each.

The two-members from each team had to take up Kayaking across the Manchanbele reservoir, a total ten kilometres. They even had to jump into the water from a ten feet high boulder and do what is known as a flip with the Kayak. Meanwhile each team got three chances to complete each bouldering task. There were 17 boulders or rocks marked at various levels of difficulty: easy, medium and the hard to climb. They had just their skills and team’s encouragement to rely on, and no climbing equipments.

Trail biking was the most popular among the cycling enthusiasts. They had a rugged 20 km stretch up the hill to complete. The team members of  ‘Power of Chi’ were delighted to have such a ‘fantastic trail’ so close to Bangalore.

Kavitha Kanaparthi, the founder of Globe Racers, a professional running organisation, is one of the organisers of BAR 101. Kavitha was very thrilled with the response. She said, “We made it a 12-hour-race because we thought it was a tough race but Bangaloreans are kicking it in (doing well). They finished the tasks ahead of time.” The organisers plan to make it an annual event, take it to other cities and add more challenges in the coming years.

The participants didn’t seem troubled by bruised fingers, scraped knees or the scorching heat. They were happy to be out there pushing the limits.

BAR 101, being the first of its kind for the city did sail off smoothly despite minor hiccups such as last minute changes to rules and some communication gaffes. But no one seemed to mind the glitches. 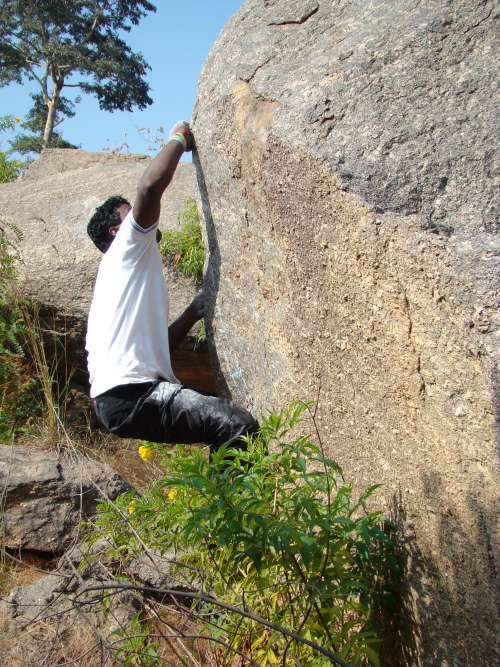 Most participants, were from Bangalore, a while a few of them were from other cities. Bangalore, the participants swear is the most ideal city for such adventures. Santosh Kumar, from Getoffurass, an offbeat travel company, also one of the organisers, agreed, "Bangaloreans have been exposed to such activities in their travels to other countries and they want to bring that experience home. So this is entirely a community driven activity."

Sense of community and camaraderie was unmistakable as each team cheered the others happily and even exchange tips on how to do it better next time. For them, BAR 101 was one event to get out and have fun, but even otherwise these adventure lovers get together at every opportunity to cycle, Kayak or go bouldering. The well heeled participants, aged 18 to 40 years came from varied backgrounds -from students, to training professionals to IT professionals.

Cycling is set to receive a boost with a competition being announced this week. Officials in the meantime are working on making Jayanagar friendly for cyclists through a special pilot project.

Hither to thither in search of jobs

Thousands of people migrate from villages to bustling cities to earn their livelihoods, especially when nature disappoints them and their farms fail to meet their basic needs. Madayan is one of them.