"25 years, these days in Bangalore, is very old" – a remark made in jest by Arul Mani, the Vice President of Karnataka Quiz Association (KQA) just might be true for Bangalore, a vibrant, over populous city with a largely transitory and migratory population. But for the founding members of Bangalore’s oldest quizzing association it was indeed a significant milestone in sustaining a culture that is increasingly lost in the malls and discotheques of this city. 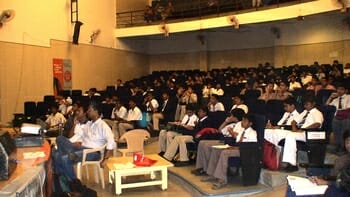 The event ASQKANCE 2008 scheduled over two days, in keeping with tradition, delivered just what it promised – a quizzing extravaganza high on intellectual quotient and modest on prize monies. College quizzes on the first day, held at St Joseph’s Boy High School, witnessed overwhelming participation with more than 90 under grad teams and 20 graduate teams.

Rajeev Gowda and Thejaswi Udupa handled the proceedings and the team from SVCE-Chennai in the graduate and Jain College in the under grad groupings won top honours. The informal Bangalore Quiz, again a huge draw, tested the participants’ trivia-quotient on various aspects of the city’s heritage.

Did you know that the Bangalore Blue, a variety of Grape, Bengaluru Mangoes and the Bangalore Rose Onion are three fruits/vegetables that are due for inclusion in the Geographic Indication list? Or the fact that Sadashivanagar is named after Karnad Sadashiva Rao, the freedom fighter and social reformer who was the very first from Karnataka to sign the Satyagraha pledge? The other informal quizzes included the Sports Quiz by Vivek Karthikeyan and the Science Quiz by Rajagopal.

The appropriately titled "Silver Screen", the audio visual (AV) quiz was the last on day one. Quizzers jogged their memories to remember and connect movies and their creators, musicians and their master pieces. Also referred to as the "Ent" (short for entertainment) quiz, the AV is a quick peek into various genres of popular culture.

Day two at Purandara Bhavan in the quiet Indiranagar neighbourhood started with the School Quiz. The rush of children of all ages and sizes was the usual nightmare; handling a barrage of questions from kids and parents alike, the organisers took the ensuing chaos in their stride and managed to settle everyone well in time for the event to start. More than 100 teams of two members each battled it out for the top eight.

The team from Sri Kumarans Public School eventually won the finals and took home the trophy. Quiz Master Dibyendu Das admitted that a lot of the questions were inspired by his son who also was among the eager bunch of participants. Generous give-aways including T-Shirts and pens from the sponsors TVS Tyres, kept the audience engaged and vying for them every time a question was thrown in their direction.

Two quiz books were released in the course of the celebrations, the regular KQA Yearbook for 2007-08, a compilation of all the quizzes held in the year and "The KQA School Quiz Book 2008" a special edition quiz book with 25 quizzes on 25 different topics by 25 Quizmasters – and no prizes for guessing why the number 25 figures so prominently. The School Quiz book was handed out free to all participants in the school event.

In between the events, Mrs.Mulky, wife of the late Wing Commander G R Mulky, founder of KQA gave away prizes to the winners of the recently held Mahaquizzer 2008, KQA’s solo quizzing championship that was held at seven cities across the country.

The last event for the day was ‘Sesame’, the open quiz where team members are usually of various ages, gender, and educational or corporate affiliations. More than 80 teams from across the country, of four members each participated in the preliminary round. KQA’s rich history of churning out good quizzers bears testimony to the fact that hard core quizzers from distant cities like Mumbai and Delhi traveled to Bangalore for no other reason than to be a part of the event.

Arun Hiregange, one of the quizmasters later remarked, that the ‘junta’ cracked questions that he had least expected them to and that it was indeed one of the most fulfilling quizzes he had ever anchored. The high scoring final was a nail biting finish and the team with ‘We are like this only’ from Bangalore (where else, with that typical name) won the quiz by a meager ten points.

And so it was curtains down on the KQA’s 25th Anniversary celebrations that everybody left eagerly awaiting the next.

Let me leave you with a question on Bangalore that had everybody scratching their heads: Why was St.Philomena’s Hospital, Bangalore featured prominently in the news for about a week in July 1982? For questions and answers visit http://kqaquizzes.org. ⊕

About Siby Kuriakose 1 Article
The author has not yet added any personal or biographical info to her or his author profile.

Take photos of the issues, post it on social media by tagging the authorities. Have faith: they will solve the issues for you!

Ever thought about all the sanitary pads that end up in landfills? Is there an alternative? Here’s a user’s perspective on making the shift to menstrual cups.