Kathakali is an art form from Kerala that tells a story with  two or more  performers. It is a form of sanskrit dance theatre that was traditionally practiced and professed by male actors.[1] 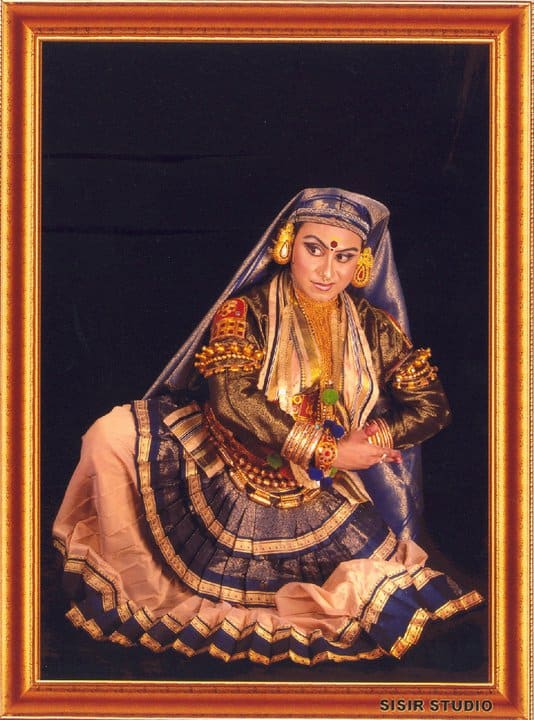 For many centuries men have been responsible for upholding and passing on the classical art forms from one generation to another especially during times when women were forbidden from entering the world of performing arts. Hence it is not surprising that men have taken on women’s toles in these traditional art forms.

Guru Lalitha Ubhaykar, renowned Hindustani artiste and Guru Usha Venkatateshwaran , director of a dance company named Natyalakshana jointly organised an evening of Kathakali performance at Smrithi Nanadan, on the 17th of December, 2010. The performance was the presentation of a complete solo margam or repertoire on stree vesham (female attire) genus on Kathakali presented by Probal Gupta as researched under his Guru Sri Padmanabhan.

The performance began with an invocatory piece named ‘Thodayam‘ where the artist pays his obeisance to different deities. The rest of the compositions performed, were influenced by women protagonists from the Mahabharatha and Puranas. The monologue of Draupadi where she importunes Krishna for the injustice done to her in an open court explored Karuna rasa.

Every actor essentially plays a unique part where the attire, the colors of the make-up are specific to each character. The music used is called ‘Sopanam’ one of the oldest tradition of Carnatic music that was traditionally  part of temple rituals. The elaborate hand gestures used are  coded in the treatise  ‘Hasthalakshana Deepika’ that are amplified with intricate eye and facial expressions.

The next padam or composition revolved around two characters Narakathundi aka Lalita [2], the sister of Demon Narakasura who falls in love with Jayantha, the handsome son of Indira. This was again a monologue where Lalita’s actions and reaction were played by the performer with sambhoga (physical union) shringara being the dominant emotion. The piece was very intense and effectively executed by the artist.

Probal Gupta failed to assume the minute nuances, gestures and body language of a female which was a constant reminder to the audience that it is a man playing a woman’s role [3]. The so called contemporary concept of patriotism that was executed through ‘Vaishnava Janatho’, a Gujrathi poem by the 15th century poet Narsinh Mehta, as a benediction to the citizens of India was very elementary in terms of choreography and concept.

The incorporation of padaartha abhinaya or literal translation of the lyrics, narratives, saari the coded motion and incorporation of Mohiniattam movement were the special features of his performance[4]. The new approach included the use of prerecorded music instead of live music, three halogen lights instead of a real lamp and shortening of the pieces to cater to the needs of the modern audience with busy lives.

⊕Addendum
The artist Probal Gupta has raised the following points about this article.

[4] How can one dance form Kathakali have Mohiniyattam incorporated in it?
Author’s response: The movements were definitely inspired by Mohiniattam. Besides, Mohiniattam itself has high influences of Kathakali in it.

Water supply and waste management is the priority says the New Mayor. Will he follow through or will it be yet another scam ridden, bankrupt year for BBMP?

A journey down memory lane in Russell Market

Three years after the fire tragedy, Russell Market is back to business as usual. Pavan Kulkarni walks through the heritage building, to capture the glimpses of the market and narrate the stories that he comes across.