Satyajit Ray, Francois Truffaut, Girish Kasaravalli, Film Noir, Iranian documentaries and more – Bengaluru is the new haven for those wanting to explore cinema beyond the multiplexes. Whether one is looking for international film festivals or intimate rooftop screenings, the city’s many film societies have it all. Besides bringing us the best in the world of cinema, they offer film buffs both new and seasoned, the opportunity to interact with one another.

The city’s oldest existing film society is of course the Suchitra Film Society (SFS). Suchitra started in 1971 as a forum for screening films that were not available commercially. 37 years later, the arrival of the Bengalooru International Film Festival (BIFF) has placed it firmly in the running as one of the leading centers of film appreciation in the country. Says secretary N Shashidhar: "While the society is old, its strength lies in the fact that it constantly explores new ideas."

The Bangalore Film Society (BFS) is another with origins that date back 30 years. BFS has overcome financial, time and space constraints to outlive the other seven or eight societies that started simultaneously in the ‘70s. While societies like Suchitra place greater emphasis on aesthetic value, there is a distinct activist-bent to the films BFS screens. Secretary George Kutty often described as the "heart and soul" of BFS agrees. "We like to screen cinema of artistic value but true art also transforms people and society," he says, while also pointing out that "…we don’t make it sloganeering."

Apart from regular monthly screenings for its members, BFS also collaborates with other NGOs to showcase films, usually open to the public. Its strength lies in the thematic presentation of films. The ‘Water’ Film Festival is an excellent example. With themes ranging from ‘Water Privatisation’ to ‘Displacement by big dams’, the festival "opened up a floodgate of issues" for the audience to engage in, without choosing a stand consciously.

In contrast, a conscious political stand is what Pedestrian Pictures strives for. Unlike typical film societies PedPics, started in 2001, is a media-activist organization, as long time member Sanjana puts it. She explains, "We use different forms of media to engage in various questions, whether it is women’s rights, Dalit issues or communalism. Cinema is just one of the channels." Besides screenings on the last Saturday of every month, PedPics also makes films and publishes booklets on various issues.

Unlike typical film societies politics plays a central role in PedPics’ activities. So much so that they reject any kind of institutional funding, and instead depend on their film, book sales and individual donations. Another trait that distinguishes them from others like Suchitra and BFS is the fact that they don’t run on a membership basis. The monthly screenings are free of charge and open to all. While the group is open to volunteers and sometimes even takes on interns for in-house productions, they’re cautious about whom they work with. Sanjana cites examples of people who ask to work on films on women’s rights but feel that women are not equal to men. "We welcome volunteers and we’re open to discussions but it’s important that whoever works with us is also open minded about these issues."

The above-mentioned groups are well known in the city and make for somewhat obvious choices. There also exist several smaller more intimate groups that offer serious and sometimes unusual cinema without the formality of film societies. 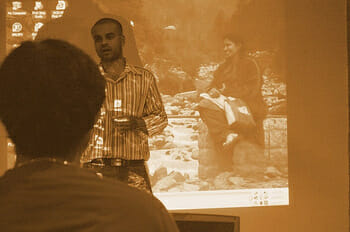 A local filmmaker showcases his work at a BRTFF screening. Pic: BRTFF.

The Bangalore Rooftop Film Festival (BRTFF) is one such group. At around eight months, BRTFF is young but has already held four screenings.

The concept is simple – all screenings are completely volunteer-driven so those who attend must also participate in the organisation. "We get together and someone brings a projector, someone else might bring speakers or provide us the rooftop. Everyone pitches in" explains Thejesh, one of the ten people who initially organised the group. The idea came from the first RTFF that happened in Chennai, which in turn borrowed the idea from a similar event in the US. "The point was that a lot of people found film societies a bit too formal or the screenings a bit expensive." Apart from interesting cinema, Thejesh also stresses on fun being an important part of the BRTFF screenings.

Film critic M K Raghavendra, is part of a group so informal it doesn’t even have a name. Using the office of one of the members as an auditorium, the group, which consists of anywhere between four to ten people, meets every Saturday. Raghavendra, who acts as curator is the only member who is directly connected to films. The rest of the members are an eclectic bunch – architects, consultants, journalists and students. "They’re people who are not exactly knowledgeable in theory but have, over the years, become sensitive to cinema," he explains.

The group started three years ago with mainly friends seeking an alternative to what he calls the ‘snobbishness’ of film societies. "Film societies by and large operate on the notion of classics," he says. "For example," he points out, "they don’t show horror films or any Hollywood at all."

What makes them tick

Not surprisingly, film societies disagree. Shashidhar insists that Suchitra does not pay lip service to any particular kind of cinema. "We’re not against any kind of cinema, and encourage members to try and pick films for screenings," he says. He also points out that not all members of Suchitra are filmmakers or critics well-versed in film theory. Although members include stalwarts like Girish Kasaravalli, the society, Shashidhar claims, welcomes members with little or no exposure to cinema. "In fact much of our membership consists of young IT professionals, students and housewives – who might be totally illiterate in the grammar of cinema but are otherwise seriously interested," he points out.

"It’s the passion that’s important," says George Kutty. "In fact, at BFS we try to encourage young people to come up with ideas as older members might become a little set in their thinking." Siddharth, an MBA student and a longtime BFS volunteer is the perfect example. He’s the curator for this month’s screenings. The theme he’s chosen: `All We Need is Love’. "All films are love stories that also simultaneously deal with language barriers," he explains.

"It’s important to recognise the context within which film societies operate before joining one," adds Sanjana. The context is indeed crucial to understanding the groups. Suchitra might be ideal for those looking for a somewhat structured take on cinema. The society even organises film appreciation workshops to this end. BFS is a great place for those interested in exploring theme-based films and documentaries that discuss key issues without getting too uncomfortable. The latest edition of the Water Film Festival (due in September) might be a good idea as it is open to all. If as Sanjana puts it you are willing to be challenged, a Pedestrian Pictures screening might be well worth a visit. 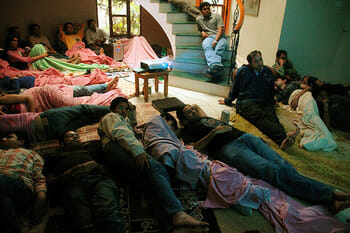 However the advantage with small groups is the lack of formal registration processes. Raghavendra’s Saturday group consists of a few regulars but the rest are a shifting audience based on convenience. Only 30 per cent of BRTFF’s audience are regulars. The choice of films is another reason to watch out for small groups. The films Raghavendra curates are often "very dark, weird and downright grotesque" – different from the standard world cinema fare.

BRTFF on the other hand screens critically acclaimed movies but also provides a platform for local talent. "We encourage local independent movies, discuss every aspect of the film- right from funding to the direction," says Thejesh.

While most film societies stress on the ‘open to all’ aspect of their groups there is one that stresses on its exclusiveness.

Good As You (GAY), an informal support group for Bangalore’s LGBT population screens ‘queer’ films on a regular basis. The screenings usually take place in the office of an NGO called Swabhava run by longtime member Vinay Chandran. About once a month, the group — usually not exceeding 40 people — gathers around a television set to watch films. And contrary to popular assumptions the films are not always serious. Says Vinay, "We don’t exactly look for a moral in the films we screen; a lot of it is popular cinema, like Brokeback Mountain." "The idea is to provide a space for cinema that tells their stories," he adds.

What is surprising about such informal groups is the fact that they seem to have lasted. "Even though the idea for BRTFF came from Chennai, we’ve had more screenings than they have in past seven months," says Thejesh. Similarly Raghavendra’s group has been operating for the last three years while Vinay points out that GAY at 15 years is the oldest informal group. Occasional hiccups aside – difficulty in finding rooftops or the lack of space for GAY screenings due to the Swabhava office moving – these groups seem to have endured where even societies like Collective Chaos (that had about 700 members) shut down.

With increasing availability of world cinema and easy access to the digital media (the Internet is an extremely popular source for movies) serious cinephiles also have the choice of starting their own groups. All one needs are like-minded people. BRTFF even offers to help those who wish to organise their own rooftop screenings.

Ultimately whether you become a member of an acclaimed film society in Bangalore or start your own the joy is in the shared experience. Watching films alone is simply not the same. As Raghavendra puts it, "It is like telling yourself a joke." ⊕

Was the government fair in not permitting the Bangalore Book Fair? Why there should be book fairs?

A little sunshine to cheer them up

The feeling that a Womens’ club can do ‘more than just cookery demonstrations’ was the motivation behind this home for children from difficult circumstances.

From Oota to Khana