Padmashree P T Usha was the chief guest at the sports day celebrations at The Samhita Academy, a school in south Bangalore off Bannerghatta Road. The students were abuzz with excitement at the second annual sports and athletic meet on December 11th. Also present were the school’s Permanent Trustee, S D Shibulal, COO of Infosys Technologies and Managing Trustee, Kumari Shibulal along with proud parents.

The school spread over a six-acre campus, has close to 200 students, stresses on a holistic approach to learning. The school also has a 25 per cent quota for under-privileged children in each class and provides free education for them. 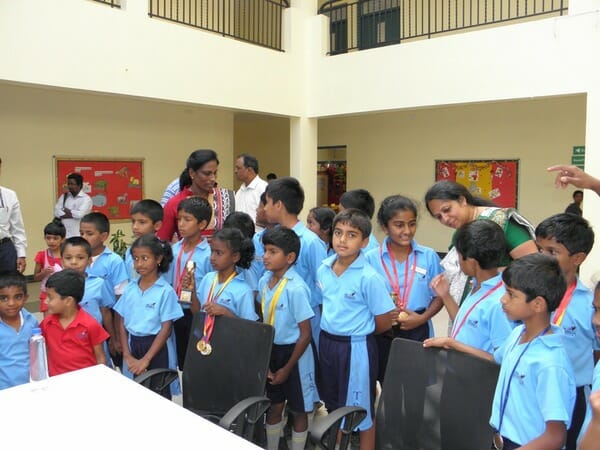 P T Usha and Kumari Shibulal interacting with the winners of the sports meet at Samhita Academy. Pic: Yogaraj Mudalgi.

P T Usha talked to the students about balancing academics and sports. She shared some anecdotes about her hardships and her success as an athlete at the international level.

Speaking to presspersons, Usha said for every athelete being coached at her  ‘Usha Athletics Centre’ the goal is to win a gold medal at London Olympics 2012. "We are training rigorously and aim to win medals at London in 2012."

In a conversation with Citizen Matters, the former athlete best known as the "Payyoli Express" shared her views on need for support to athletes during training and the adverse effects of expectations by the nation from sportspersons.  Excerpts from the interview:

What do you think of Bangalore as a sporting center?

P T Usha: Bangalore has always been a good sporting center. There is ample infrastructure here and some very good athletes here but still a lot can be done here. Bangalore can go a long way with a little more development.

What can schools do to encourage sports?

P T Usha: Schools can encourage students to participate in sports concurrently with academics. Students have had to choose between either of them. Sports need not be for the select few.

Is there a difference in rural and urban mindsets about sports?

P T Usha: I would think so. In the rural areas, they do not have the means to participate in sports. That is why they shy away from it. Support has to be provided from grassroots level and only then will there be a change in the mindset. When athletes succeed, the Government announces prizes for them, which is a good thing but this kind of support has to be provided at an initial stage so that good athletes are nurtured. Actually, that is more important for an athlete to succeed. Even when support is provided, people expect instant results which are not possible. It takes time for fruition and they need to be patient.

There seems to be a renewed interest in marathons. Your comment?

P T Usha: Well, athletics is the mother of all sports and with the recent achievements of India on the track and field events and the increased support, more and more people are taking an interest in it. Also, running is one of the best ways to keep fit and more people, especially the youth are getting health conscious and taking up marathons and this is a really good development.