Looking at Manjula Sridhar, you may mistake the BTM Layout resident for yet another technology professional. Not quite. 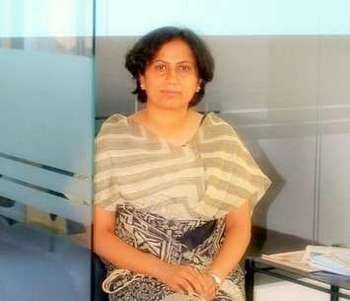 As a Program Manager at Lucent, she was appointed the Distinguished Member of Technology (DMTS) in India. She was recipient of the Lucent Innovator Award and Bell Labs President Gold Award, and has filed many patents in wireless security and network management areas. She was Co-Founder and CTO at Aujas Networks.

Now working for a large telecom MNC as Director, Market Analyses Datacom, she is also an avid cyclist and endurance athlete. She has participated in dozens of events, cycled over thousands of kilometres, and won many races.

Growing up in small village near Raichur and later near Mysore, the eldest child of a PWD Junior Engineer, her schooling was in laidback single teacher kannada medium village schools. Manjula says there was no concept of competition, “What you did became the coolest thing.”

From getting a well-respected job to starting out on her own, and then getting into serious cycling, Manjula says she has just gone with the flow. Citizen Matters spoke to Manjula on her journey, her startup and her passions.

Manjula also runs for Asha, an NGO working on children’s education in Bangalore. A fund raising activity, it supports various schools including Ananya, where she also teaches Karate. See article

Why did you get into engineering?

My dream was to be an IPS officer. Read Competition Success (magazine)…learnt karate. For a couple of years, I noted 500 out of 700 successful UPS candidates were engineers. So I thought it was an easy way to get into IPS. Turned out to be really good at it, got a university rank, got a campus job and plunged into IT success story.

How was it coming to Bangalore, a big city?

I took a year to get plugged into what was happening, everybody spoke in English. People in the city are more clued into practical aspects of life, what works. In a village, there is more importance to value systems, what is right & wrong. I still remember, my brother once saw a 5 paisa coin lying on the ground, ran to me, and asked, “Akka, can I pick it up”

After a company sponsored Masters programme in US at Illinois Institute of Technology, Chicago, Manjula moved back to India to be with her parents, who had settled in BTM Layout by then. Plus, she found “India was a happening place”.

So how you get into entrepreneurship?

I had always planned to get into entrepreneurship. In early 2007, I built a product (in mobile network security), did the ground work, applied for a patent. I did it alone, (then) you are not responsible for anyone else’s misery.

Got an introduction to IDG (the venture capital firm), and (took up the offer of) ‘entrepreneur in residence’. Built a company.

Some of the events Manjula Sridhar has taken part in.

3) Bangalore Biking Championships 2009-2010 (League races for an year, One with the highest points becomes the champion) – last year’s and this year’s trophy winner.

5) Participated in Tour of Tamilnadu launch ride in Chennai

Future events include: Brevets: Qualifier for Long distance endurance cycling event in Paris and the Half Ironman in Singapore – Triathlon with swimming in the sea, biking and running

How was the startup experience?

Riskiest thing in my life! Didn’t have the background, didn’t have complete skills for negotiation etc. Didn’t know how to manage the environment. The first six months was full of highs and lows. Working on something new was the high, then reality (hits you), are you doing to the right thing? No salary but EMIs still need to be paid.

Would you describe yourself a geek?

No. Though I have filed about 9 patents…But I have always had this other side, very active in extra curriculars. Hardly studied. Never limited myself to academic aspects. I was the school monitor, sports captain and (Participated in) debates, dance.

Did you really mean to be an entrepreneur? What’s the best part about starting up? What’s not that great?

Always imagined myself to be a police officer. That was the only heartbreak. Entrepreneurship falls into the category (glorified careers like the police or military). The best part? You live your potential, and the sense of control. What’s not that great? Money!

In early 2010, Manjula exited Aujas, the firm she had co-founded, and moved back to a corporate career.

Which is the favourite stint in your career?

Definitely, entrepreneurship. The best time, used all my skills. Built People, technology, business skills. On hindsight, I would have done it better. But given the circumstance, and where I came from, I took the best possible options.

How did you get into cycling and adventure sports? What made you passionate?

I have always been an outdoors person, Trekked in Himalayas, practiced martial arts. They appeal to the "Explorer" in me. After I exited Aujas, I used the time to focus on cycling and get over the feeling of burn out due to constant work.

Cycling combines two great things – nature and travel. No other sport gives one that high – sense of wellness and a functional use as well. Running yes, but you can’t run to Mysore!

What do you think of the cycle groups in Bangalore?

Great community! One of the best in the India. Primarily lead by Bangalore Biking Club, but we also have tandem trails, cycling and more, each distinct and complimentary.

Manjula is one of the organisers of Bangalore Adventure Race to be held on Jan 8th, 2011. It is an endurance race that includes road biking, trail biking, kayaking, climbing boulders and more.

Have you found equilibrium in work-life? How do you plan the future?

What are the choices you have made to be where you are? Is your family comfortable with it?

Except for quitting my job, I just went with the flow. My parents are supportive. They are very non-complicated sort of people. Although there is implicit pressure more from peers to settle down.

I have always been free-spirited since child hood. Influenced by Vivekananda, Gandhi, That way I am a bit of an ethical snob!

Majority of inmates in Beggar’s Colony are women and 40 per cent of the inmates are mentally unstable. A pretty clear picture emerges – this is not a rehabilitation colony for beggars. Instead, this is a shelter for old, and often mentally unstable people who have been abandoned by their families.

Sanjaynagar demands walkable footpaths for all

Many people have been hurt on this road by being forced to walk on the road and interfere with the traffic or falling because of bad quality of the surface.