Zipping across a skating rink on a pair of wheels may only have seemed like a cool hobby to many youngsters until a few years back. But over the last decade, skating has quietly grown as a sport in Bengaluru – from having 5-6 skating clubs a decade ago, the city now has 15 registered clubs. For many kids practicing in these clubs, skating could easily be their future career. 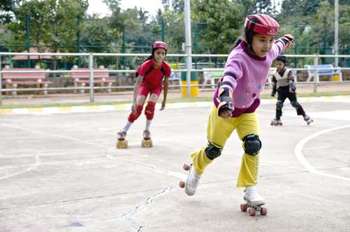 Faraz A Umar, a seventh standard student at Frank Anthony Public School and member of Force One skating club in Banashankari, shows no hint of doubt when he says that he wants to be a professional skater. He got his first pair of skates when he was four. “It was my fourth birthday gift and I still love it. I started competing in championship events when I was eight,” he says. Umar has won around 40 medals in various championship events so far.

Like Umar, most children start skating at the ages of 3-5. Anuradha Giridhar, a resident of JP Nagar, enrolled her 5-year old daughter Maanasvi in the BTM Skating Club last month. A former athlete herself, Anuradha believes that it is essential for kids to focus on one sport at least. “Maanasvi learns bharatnatyam already; I wanted to introduce her to a sport as well.” But will she support her daughter pursue a career in the sport? “Definitely. I myself love sports. It would be unfair if I push her to learn the sport now, and expect her to give it up later,” says Anuradha. 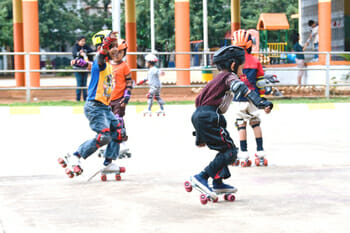 At the beginner level, Maanasvi now trains for an hour everyday at the BTM rink. The training required for professional skating is rigorous. Sudha Babu, co-founder and coach at the City Skaters club, based in Mahalakshmi Layout, says, “For professional skating, at least three hours of practice per day is required. Children in the 8-12 age group are most active, they train for 2-3 hours after school.” Sudha coaches around 90 children in her club. All clubs in Bangalore are affiliated to Bangalore District Roller Skating Association (BDRSA).

Karnataka has consistently been winning the speed skating championship in the national level for the last seven years. “Some parents see skating as a fun activity only. But better facilities and good performances by skaters in recent times is creating more awareness now, and more people are taking it seriously,” says Sudha.

Sure enough, it’s the parents who are more enthusiastic at the various championship events in the city. At the 11th district level championships held in the Chennammanakere skating rink in Banashankari 3rd stage from November 12-14, 190 children participated.

Though the audience comprised mostly parents, the energy compensated for the limited numbers. The children, dressed in skating gear, seemed restless as they waited for their turn, but also playful. There were the occasional assurances to a fellow competitor, a fleeting hi-fi to a winner right on the track, someone consoling a second-prize winner – the results did not seem to matter as much as the process of the competition itself.

The competitions were held in five age groups – 8-10 years, 10-12, 12-14, 14-16, and above 16 years. The number of participants seemed to come down with the higher age groups. In the above-16 category, there were no participants among girls at all. “Many children drop out after a while. Some conservative families do not allow their girls to continue too,” says Sudha.

The Bangalore district level championships venue was Chennammanakere skating rink in Banashankari 3rd stage – a 200-metre professional-standard skating rink by BBMP, inaugurated two months back – is also the first of its kind in the city. There are smaller BBMP rinks in Jayanagar, Basaveshwarnagar, Sahakaranagar, Kanteerava stadium, Mahalakshmi layout and BTM Layout.

The championship venue – a 200-metre professional-standard skating rink by BBMP, inaugurated two months back – is also the first of its kind in the city. There are smaller BBMP rinks in Jayanagar, Basaveshwarnagar, Sahakaranagar, Kanteerava stadium, Mahalakshmi layout and BTM Layout. Skating clubs use these rinks for practice; none of the clubs own a rink. Only a few schools like Vidyashilp Academy in Yelahanka and Vibgyor High Schools in Marathahalli and Haralur Road have their own rinks.

Though coaches say that more skating rinks and government support is needed, the skating association members say that the status of skating has improved a lot. M Sathyan, Secretary of the Karnataka Roller Skating Association (KRSA) and Additional General Secretary of Roller Skating Federation of India (RSFI), says, “New rinks are coming up and more competitions are being held now. Some schools in Bangalore are also teaching skating to students.”

The 53 kids selected from the district level will participate in the state level championship on December 3rd-5th in Chennammanakere. The winners in the state level will then participate in the national level competitions. Usually, almost half of the 60-70 children selected from the state for the national championship, are from Bangalore. Though the state has not forayed into innovative forms like bharatanatyam skating, pair skating and hockey skating – as many north Indian states have – the KRSA hopes to maintain its place in speed skating this year too. “We are the best in the country in speed skating,” says Sathyan.

Can you get a degree in wildlife in India?

Yes, you can, but only in namma Bengaluru! In the second of our 3-part series, look at the NCBS and how it’s innovating on research in the biological sciences.

Stitch it, weave it and set up your home!

Whether it is a nest of grass or an elaborately woven home, these animals feel at home in houses of their own making!

Run for fun, it is addictive

Midnight marathon was the last marathon event of 2011, the top Indian runners were from Bengaluru. Why do they like running so much? How do they train for the marathons?