On a sleepy Sunday afternoon of 29 June, Bengaluru made history of sorts. A 400 strong crowd made its way from Basavangudi’s National College to the Town Hall, marking the city’s first ever Pride Parade. For the uninitiated, the Pride Parade is an annual march held by queer communities around the world, as an expression of pride for their sexual identities and, in India’s case, a demand for equal rights.

The four-km rally was organised on Sunday, 29 June, to coordinate with the anniversary of what is commonly believed to be the beginning of the queer rights movement in the world – the 1969 Stonewall riots in New York City.

Delhi joined Bengaluru in celebrating its first Pride as well, while Kolkata, which takes credit for bringing Pride to the country, has been organising annual parades since the year 2003. The idea for a Bengaluru Pride was born just three weeks ago, when eleven of the city’s queer and sexual rights organisations met to discuss the possibility of a synchronized event with Delhi and Kolkata.

The march aimed to bring to light some of the rights denied to India’s sexual minorities. The chief demand made by the participants (and queer activists for a long time) was that the Sec 377 of the IPC be amended to decriminalise all forms of consensual sex between adults. The rally also sought, legal recognition of those who had undergone sex change, basic rights such as voting and employment opportunities and an end to police and goonda violence.

"We want to show people how diverse sexuality and gender truly is and the need to accept this diversity," says Rex Watts, director of Sangama, a sexual rights organisation.

Whose right is it anyway?

For Sumathi, a member of LesBit, a two-year-old organisation that provides support for Lesbian and Female-to-Male transgenders, the march was a cry against forced heterosexual marriages. "It’s a celebration of women’s right to choose whom they marry or whether they wish to marry," she says while waving a placard that reads ‘Condemn Lesbian Suicide’. "We’re claiming our space," she adds smiling.

Utsa, a scientist from the Indian Institute of Science recalled a lesbian scientist who had committed suicide in a top scientific institution of the country. "I’m here without a mask today, so that it doesn’t happen anymore," she says. 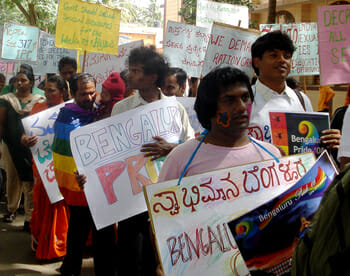 Apart from participants from all four southern states (as well as Maharashtra) the parade also saw several other groups that wished to express solidarity with the Queer Rights movement as well as have their own demands heard. Prominent among these were the Karnataka Sex Workers’ Union and several smaller women’s rights groups.

While the Pride’s objective was serious, the crowd’s mood itself was festive. The walk was not unlike a carnival with its brilliant colours, rainbow umbrellas, music and Venetian masks- for those who did not wish to be identified. However in spite of a few people seeking anonymity, it was clear that for many the point was open space. The participants wore T-shirts with colourful messages such as ‘the pink sheep of the family’ and carried placards with slogans. Theatre group Masra created much of the artwork, especially the rainbow coloured hats and masks.

Although the turnout was limited, when compared to the Pride Parades of Brazil and the US, the crowd was just as boisterous. For Jerina, the colours of the parade "looked like festival." Indeed, all participants seem to reiterate that the day was a celebration. Suresh, a member of Sangama, adds that being out in the open is a great feeling. "We’re not just sitting around. We’re finally celebrating who we are, " he says, while posing enthusiastically for a picture with his friends. 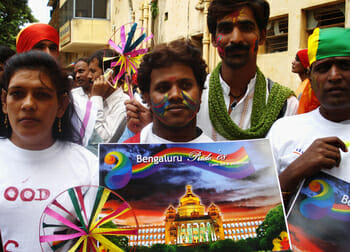 The march drew several stares; curious onlookers were provided with parchas or flyers with the history of the Pride Parade as well as the Bengaluru Pride’s demands. Surprisingly, most seemed in favour of the march. Bhaskar, an auto driver parked near National College said, "they (the participants) have to do all this otherwise they won’t have any rights."

Even members of the police force that had accumulated for security purposes, seemed to agree. "They have no occupation, no jobs. They also deserve opportunities so they have to walk," said Muddrana Shetty, an Inspector monitoring the 100 strong police force accompanying the march.

Much to the organisers’ amusement some of the constables even made suggestions on how passing autos should be given two parchas so that the, "Driver and passenger could both read about the demands." "The police department has been surprisingly supportive," says Rajnish, one of the organisers, "even though one of our demands is that police atrocity be stopped."

The Parade ended at the Town Hall, where several queer rights activists spoke of the need for such solidarity as the day had seen. While Arvind Narrain of the Alternative Law Forum, vowed that the struggle against Sec. 377 would continue till the Act was amended, Rajnish asked the crowd to take a moment to remember lesbian suicides that the country had seen.

As Bengaluru Pride 2008 drew to an end, what strikes one most is the fact that the parade was not only a celebration of the participants’ diversity but also a testament to what it costs them to be different.

A Citizen Matters check found out there is widespread interest amongst citizens in helping the city shake off the ‘garbage’ city tag, but there is much ground to be covered.

Shivakumar’s murals depicting Karnataka’s past, present and future was unveiled at Vikas Soudha.

Some schools lead in rich-poor mixing

Karnataka’s revised rules for the RTE Act will be out soon. In Bengaluru, even as some schools oppose rich-poor integration, others are already bridging the gap quietly.