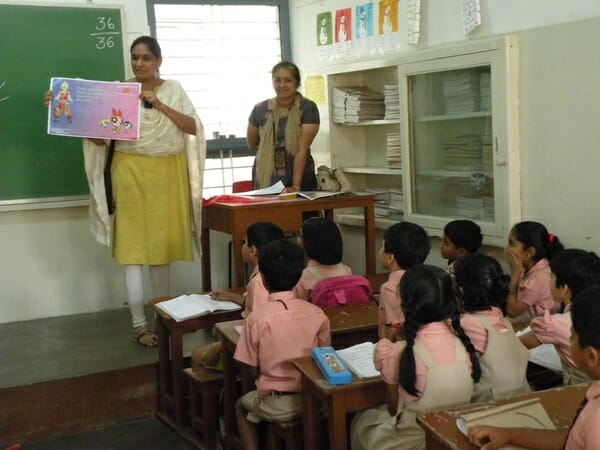 For adults like me, unused to interacting with small children on a regular basis, walking into a primary school classroom is like stepping into another world. A chorus of goodmorningma’am, keen faces, eagerness to listen…in short, enthusiasm unbound. For people like Aparna D and Rajeshwari S however, these reactions are familiar territory. Aparna and Rajeshwari are not teachers in the formal sense. But they are educators. People with a sense of mission, who understand how important it is to get children to think about what they eat.

As Aparna introduces herself saying she is from Health Smart Kid, there is slight bewilderment but when she takes the term apart, there is complete understanding. Yes, the children know what each word means. And when she whips out pictures of popular cartoon characters like the Power Puff Girls and Four Arms, there are squeals of recognition.

Aparna’s questions are simple. ‘How do they get their power?’ ‘What do they eat?’ The answers come quick. ‘Milk’, ‘eggs’, ‘bread’ ‘vegetables’. The class of seven year olds know exactly what gives strength, contributes to growth. When further pictures of animals like the elephant, deer, etc, are displayed with the same question and the rider, "Do they go to McDonalds or Burger King?" there is much laughter all round. How ridiculous is what the children’s response signifies.

As parents, many of us wish we could get our children to eat healthier. But few of us are willing to invest time and energy into showing them how to do this. The pressures of urban living, the little time parents spend with their children, inconvenience of cooking daily, and increasing use of technology have all combined towards creating a generation of youngsters who don’t care much for home cooked meals. Often, it’s beguiling advertisements that dictate what’s cool and what’s not.

"Till the age of about five-six, it’s okay," says Aparna. "Children eat mostly home food. After that, media influence and peer pressure sets in. But we believe that if kids are educated in eating right, and this is reinforced constantly, they will choose what is good for them."

Aparna and Rajeshwari are two mothers who realised that their own children falling sick and taking a long time to recover had much to do with young bodies not getting adequate nutrition. "There is little support in our environment for a healthy lifestyle. What does a treat mean in our urban way of life?" asks Aparna rhetorically. "It means going out to eat. That would translate mostly into something oily or sweet."

"In schools, sometimes teachers do make an effort," chips in Rajeshwari. "But because it is considered part of teaching, the message often slips by unnoticed. We felt that somebody else talking about the subject would have more of an impact on the children."

This is how the duo came up with Health Smart Kid, to raise awareness on healthy eating and child obesity.  Neither of them knew much about education, both having worked in the banking sector before becoming full time homemakers. However, they knew they had to have a professional in the field of nutrition to guide them. Their lack of experience did not deter them, so they visited a hospital, met the nutritionist and requested her to spare some time for this mission. That was quite simply how they started.

Health Smart Kid’s first campaign was in January this year, at a library for children. Since then, they have had 10 campaigns -at apartments, in schools, even one at a football ground. Campaigns are tailored according to the location and age of the children. For instance, at one school, a batch of children from Std I were asked to colour the Food Pyramid. Thereafter the nutritionist told the children to devise a menu for a balanced breakfast, taking items from the pyramid. For very young children, information is imparted in a simple and direct manner while interest is retained through activities such as colouring, for which small prizes are handed out.

Older children – 4th to 7th standards, were asked to collect processed food wrappers; everything that came into each child’s home for a week. Once the task is completed, the nutritionist analyses the wrappers. The aim is to give an informative talk on the dangers of too much processed food, how to read ingredients and why some of these could be bad for health.

Health Smart Kid’s biggest obstacle lies in just reaching out to children, in getting authorities to agree to give a slot and place for a talk.  "Principals don’t want to even meet us. And we’ve sometimes been asked whether we are promoting some health drink!" says Aparna. Apart from such difficulties, the duo is hampered by financial constraints, the result of conducting their campaigns free of cost.

Keen on spreading the message, they would like to create a television advertisement but have not been able to make much headway because "each time we contact somebody for something, we see our expenditure shooting up", points out Rajeshwari. After having dipped into their pockets and using friends and family as resources, they have managed to create a radio jingle but it has still not been aired due to the cost factor. "It would be lovely to have corporate sponsorship," says Aparna wistfully. "If a corporate with social responsibility would shoulder some of the financial burden……."

Currently working with a single nutritionist – Bharathi A V (the CEO of a health management company who has been associated with HSK for six months and who works free of cost) the duo would like more nutritionists on board. And volunteers for simple tasks like handing out papers and pencils to the children. "Stay at home mothers or college students, perhaps?" asks Aparna hopefully.

Given the dishonest messages that our children are constantly bombarded by, in the form of a capitalist media and a highly consumerist society, we should be beside ourselves with joy when a simple, honest campaign like this comes along.

So why don’t we give initiatives like Health Smart Kid the encouragement it deserves?

When the Tiger came back to his fort

The first edition of the classical music festival will kick off this weekend. The two-day festival will feature an eclectic mix of artistes.

Kalasipalaya is the hub of every major trucking company and supporting services in Bangalore; here are a few images that capture the spirit of Kalasipalaya.