Many Bangaloreans dismiss today’s Bangalore as a mutant form of the quaint city of yesteryears. But many old buildings and watering holes have survived as steadfast witnesses to the city’s changing identity and magically present a bioscope view in sepia tones of the glorious Bangalore of the past. 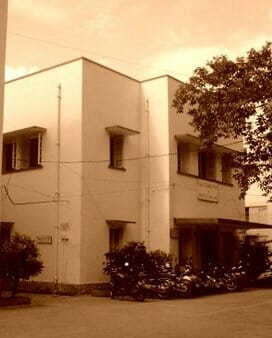 Established in 1945, the Indian Institute of World Culture (IIWC) in Basavanagudi located on the road named after B.P Wadia – its founder, is not only a window to the city’s rich cultural past but also to the first efforts to promote cross cultural exchange and inculcate a cosmopolitan spirit in the city. The Institute is a voluntary non political organization registered under the Society’s Act with the objective to advance universal brotherhood and inter cultural exchange.

The public along with the Institute’s 3200 members have access to two auditoriums; art and bhajan classes; a main library and reading room; a children’s library with special section of science text books; summer programs; endowment programs; lectures and seminars; cultural programs and exhibitions alongside publications on diverse topics like philosophy, religion, ethics and culture.

Upholding the spirit behind the institute’s objectives, the membership fees, rate of publications and programs are nominal and have marginally increased over the years to make them easily accessible to all. Ordinary membership costs Rs.120 per year and life membership costs Rs.1200. The monthly fee for the weekly Bhajan classes is Rs.10 per month and the art classes is Rs.80 per month. “The funds collected are enough to finance the Institute’s short term programs but are inadequate for our development projects like computerisation of the library and addition of CD-roms and multimedia to the Children’s library,” says Y M Balakrishna, the Honorary Secretary.

“Few Bangaloreans know that the Institute’s library is the finest in the city,” remarks C R Rao, a septuagenarian who frequents the library. With a wide collection of books, magazines and periodicals some that are rare and out of print, the library managed by cheerful staff members is a must visit. The Institute is open from 8:30 am to 7:30 pm Tuesday to Sunday (Monday is a holiday).The Main library, Magazine section and Children’s library are open from 8:30 am– 12 noon and 4 pm to 7: 30 pm.

Today it is cultural programs like dance and music recitals that are preferred by the public, and the response to lectures itself is poor. “Young members prefer attending our cultural activities than a lecture on Buddhism or Upanishads,” says Y M Balakrishna. In the meantime, the institute is seeking sponsors to finance the construction of a new auditorium to seat more than its current capacity of 300 people and to cover rising maintenance costs.

Whether the Bangalorean is grappling to understand the city’s ever changing identity or complaining incessantly about its lost charm, a visit to the Institute will help. Even as the IIWC stands entrenched in its timeless ideals, it enriches Bangalore and its culture.

About Malathi Nayak 1 Article
The author has not yet added any personal or biographical info to her or his author profile.

It’s the season to be mulching…

Lots and lots of leaves on the streets – big and small, in all shades of yellow and brown. Just don’t burn them! Here’s why.

Bengaluru is a hub of research institutions, but how many us know of the scientific breakthroughs made here? From a new catalyst to generate hydrogen, to a potential cure for pancreatic cancer, here are top findings from the city over the past year

An event for photography enthusiasts in the city, promises a deeper understanding of the craft and networking with like-minded people.