There was soil dumped into one of the empty houses on the J P Nagar’s 15th Cross Ring Road, a critical artery in the southern side of the city, at the intersection with the 24th Main Road. People were talking about soil testing happening in the area when suddenly the road was blocked and the traffic was diverted. It was after two weeks that a board was put up by the BBMP and it was understood that an underpass was being constructed.

That was on 11 May 2008, another magic underpass under construction. The residents till then were clueless about the magic behind it. 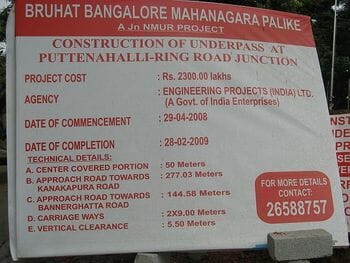 The underpass is coming up on the intersection of 24th Main and the 15th Cross (Ring Road). The latter road is now blocked near this area and the vehicles have to take a longer detour to reach the other side of the J P Nagar. The BBMP board put there mentions that the underpass will be completed by February 2009.

No sooner than the construction started, the now-common problems of traffic emerged. Within a month the residents faced a bigger nightmare when BBMP Engineers first said that 5-7ft of their property would be taken to widen the road which was necessary for the underpass. As many as 44 residents might lose their land according to the present markings.

"It came as the biggest shock for all the residents, specially because there was no prior notice to any of us," says Dr D B Meundi, president of a J P Nagar citizens association. Meundi is a child specialist and professor of pediatrics by profession. The association comprises of 600 members. Meundi further explains, "The engineers of BBMP, along with the assistant engineer N Shivanna brought a chart like thing to show us how much part of our house compound will be taken away and promptly made some markings on the walls. No one asked us and no one informed us."

Well known playwright Girish Karnad whose house is also amongst the endangered ones is very agitated by the approach of the BBMP. He expresses his unrest, "This came as a shock to me as it would to any citizen. No one wants to loose their property. Our walls were marked, the BBMP commissioner has (since) said nothing would happen. But I do not believe them. Our walls remain marked and the work continues."

Yellow markings (see right side of pic) done by BBMP on the compound wall. Pic: Author.

Karnad further opines, "There is no long term thinking done behind this underpass. In fact there was no need of an underpass here at this point of time. No one knows why there is an underpass here. There are so many other places in J P Nagar that are facing bigger traffic problems but the BBMP seems to be concentrating on this underpass itself."

Talking to Citizen Matters, Puttaraju, BBMP’s public relations officer, says, "The case is over now, once the commissioner (Dr S Subramanya) has promised that land would not be taken, then it would not be taken. The citizens should not panic now. All the citizens were informed about the underpass well before we started the construction."

BBMP engineer-in-chief, A K Gopalswamy says that for any kind of land acquisition, the BBMP has to give prior notice through the press first and then after filling of a number of forms only then can any acquisition happen. "In this case we never did any notice through press. The citizens were scared of the markings on the walls. These marking are primarily done as part of our measurements for any construction work. No one is going to loose property in the underpass construction and the commissioner has also said so. We do not find any reason to give notices any further," he adds.

While the work for the underpass took its pace the citizens’ association formed a core committee of 6-7 members who were determined enough not to let their agitation die. They organise meetings every three days. Muendi explains how they had to run around to find out the officer in charge of this project. "Once we found out the person responsible we arranged for a meeting with the officers by calling them personally, but none of them attended the meeting," he says angrily. 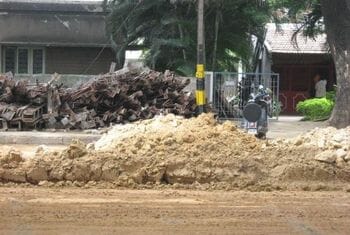 Heaps of mud lying all over the 15th Cross road; the median is under the mud heap. Pic: Author.

To further their measures after the BBMP commissioner’s word, the residents also approached MLA BN Vijay Kumar (BJP) of the Jayanagar Constituency. "The matter cannot not be solved until and unless the blue print for the plan sees a change; our MLA helped us and pressurised for the revised blueprint, but the BBMP has not shown us anything regarding that," says Meundi.

The underpass construction has given birth to more problems — power cuts, water shortage, drainage issues and more. Lalitha Rao, one of the affected residents and assistant treasurer of the association did not have water for five days in her house and had to buy it from the tankers. The water supply lines in and around her residence in the I phase got disrupted because of the construction. In the I and VI phase the BSNL telephone lines were also cut. One of the residents had knee-deep drain water in his car garage one morning.

J Poddar who is also a member of the core committee of the association saw his house foundation affected by the uprooting of big old trees outside his residence. Children are also facing troubles as the school buses and auto-rickshaws cannot reach the homes in the region. Children now have to be taken a long way to catch the buses.

At the same time, the recent rains have made the soil slippery causing a lot of trouble for people. The whole place has soil all over from the median to the footpath there is no place to walk. "Our cook, Suneeta, slipped on this road and has fractured her leg, she was in tears as she is the sole earner in her house, she cannot walk for four weeks which is hampering her income," complains one of the residents.

Residents are worried, and widespread concern will likely prevail until the BBMP puts down its intentions in writing. Widening the 15th Cross artery would mean uprooting of trees, loosing the footpaths and properties of the residents. (Note: 15th Cross is not in the official list of the 45 roads being widened now.) Residents remain clueless of whatever might happen because none of them has any written notice.

The situation may seem to be the plight of one region, but it is a wake up call for the rest of the city where more underpasses and new constructions are coming up.

The ORR underpasses are badly designed, and don’t consider pedestrians’ needs. Its medians and service roads remain a mess. A frustrated commuter offers solutions. Will the authorities listen?

NGOs, citizens and local politicians joined cause on April 18th to preserve major heritage spots in Basavanagudi. Citizen Matters chipped in too.