A new option to get your auto woes addressed is holding out promise for Bengaluru, thanks to the Transport Department’s initial enthusiasm to respond.

Auto Watch, an initiative by the technology platform Kiirti, is co-ordinating with the Transport Department to address the grievances of auto commuters. The complaints that the public reported have been forwarded to the concerned RTOs for action. Transport Commissioner Bhaskar Rao has instructed officials to ensure that each RTO should seize five autos against which there are complaints. The action taken by the RTOs will be updated in the site soon. Kiirti is an initiative by the non-profit organization eMoksha.

In the last two months since the initiative was launched, 201 cases have been reported on the site. The cases are filed under seven categories – demanding excess fare, refusing to go to a destination, not displaying driver ID, taking longer routes, faulty meters, cheating/extortion, abuse/assault. Auto Watch was initiated after Sudha Nair, 38, Project Community Manager for Kiirti, received requests from the public to open a portal to report auto complaints. After the launch and the news reports that followed, the site became very popular.

Joint Commissioner of Transport Richard V D’Souza said, "We are looking into the most serious complaints reported in the site. Further arrangements for disposing off complaints will be worked out later."

Sudha said that assault and faulty meter cases will be prioritised. "Serious abuse cases are few in number and will be handled by RTOs soon – the drivers will be notified to appear at the RTO office," she says. The complaints relating to faulty meters will be addressed when drivers go to RTO offices for their annual license renewal. As per the Standard of Weights and Measures Act 1985, drivers who use faulty meters can be punished with imprisonment for a term of six months to two years. They can also be penalized according to sections of the IPC (Indian Penal Code). 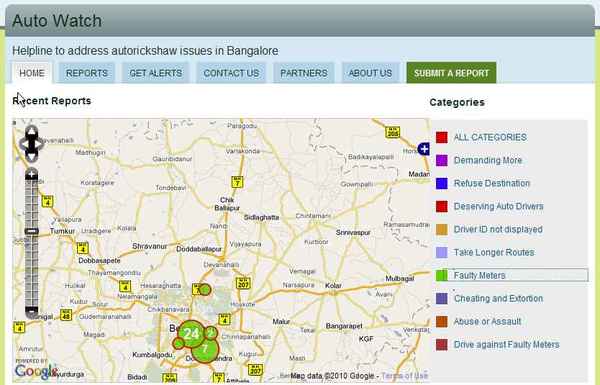 The highest number of cases reported in Auto Watch is with respect to drivers demanding excess fare (78 cases), followed by refusing to go to a destination (42 cases) and faulty meters (34 cases). Eleven cases of abuse/assault and 16 cases of cheating/extortion have also been filed. In some cases, one incident was reported under more than one category.

The complaints are received by Auto Watch volunteers through phone, SMS and webforms, and verified. Complaints can be reported by calling 0512-302-6888,
by SMSing kiirti bangauto {message} to 56677, by mailing sudha@emoksha.org or at the website directly. The highest number of cases has been reported from Koramangala.

Auto Watch aims to strengthen the Transport Department’s initiative of seizing faulty meters, and is also pushing for a deadline for digital meter installation and upgradation of meters as per the new fares. "According to the Legal Metrology department, 70 per cent of the 63000 autos in the city still operate with mechanical meters and only 16000 have altered their meters to reflect the new fares," says Sudha.

The Transport Department has two numbers – 080-22254900/22353785 – that you can call to report complaints. But the complaints are acted on only if mailed to transcom@nic.in. The helplines are open from 10 am to 5.30 pm, from Monday through Saturday. The complaints are forwarded to the respective RTO, who issues a notice to the vehicle’s owner requiring them to report to him within seven working days. Penalty is imposed as per the Motor Vehicles Act, 1988.

Right now though, lack of proof is the main reason that many drivers cannot be penalized. Autos also change ownership and jurisdiction very often, because of which complaints have to be moved from one RTO to another, delaying compliant redressal, D’Souza says.

Kiirti may be pushing for enforcement through a web solution. Independently, many Bengaluru’s techies are developing mobile phone applications that help detect tampered meters and cut down on cheating.

A GPS-enabled digital meter A-Rix by techie Siddharth Vanchinathan displays the exact distance, fare and current location during a ride. Two fare calculators for android phones are available for download here and here. (Android is the name of a phone operating system software. Many major phone brands run Android.) Citizen Matters has not independently tested these applications.

Another application named Suruk not only allows calculation of auto fare from one point to another, but also has features such as networking for auto pooling and sharing feedback about drivers. The application was developed by Anenth Guru, 23, Sandeep Bhaskar, 26, and Bala Sundara Raman, 30, alumni of IIIT-Bangalore (International Institute of Information Technology). Suruk has around 500 registered users in the city now.

Suruk can be downloaded at www.suruk.com for free of cost to any GPS-enabled mobile phone. For basic model phones which are enabled with Java and GPRS, there is another version named SurukLite, which has all features of Suruk except the Digital Meter.

With the GPS-enabled Digital Meter, you can monitor the duration, distance and tariff in real time, as you travel in the auto. There could be a variation of up to Rs 2-3 between the Suruk and auto meter fares, but higher variation could mean that the auto meter is tampered, says Sandeep. The idea is that if the commuter finds that the meter is tampered, she can get down mid-way and hire another auto. This feature also has options to track travel routes.

Suruk has an option to track routes during the trip. Pic: Subramaniam Vincent.

Suruk also allows you to check a driver’s conduct before you hire an auto. On entering the vehicle number, driver’s license number or badge number, this feature retrieves information, if available, from the feedback already entered by other users under Trip Summary option. The Trip Summary option allows you to rate a driver after a trip in any of these five categories – very helpful, honest, satisfactory, rude or lewd – as well as enter other details like fare, location etc.

Suruk also has an Emergency SMS feature which plots the exact location of the user using GPS and sends an SMS to a pre-determined emergency contact number with a Google map of the location.

Commuters can enter complaints regarding drivers also, but unlike Kiirti’s web solution, there is no mechanism to address or route these as of now. "We are trying to work out an arrangement with the traffic police department to look into complaints," Sandeep says.

Sharing autos for the right reasons

Suruk also has a Share Pooling feature that connects commuters who want to share an auto to a common destination. When a user enters the start location, destination and the time within which she plans to start the trip, the application finds other users who made a request with similar parameters, and makes the contact numbers of these users available to each other.

The concept of auto pooling is not new in the city. An auto pooling initiative introduced two years back by Seetharam Vishwanath, 38, a resident of Jayanagar and General Manager of Outer Ring Road Companies Association (ORRCA), now boasts of 22 auto rickshaws that are regularly available for pooling and 40 regular passengers who share-and-rent autos every month. The drivers are from HSR layout, BTM layout, Jayanagar, Basaveshwarnagar and Marthahalli.

Vishwanath started the initiative about two years back with just two auto drivers, who then introduced him to more drivers. "I noted down the numbers of some drivers whom I found to be polite and honest, and circulated their contact numbers among around 900 people," he says.

For commuters who want to pool and rent auto on a monthly basis, there are discounts. Vishwanath explains, "Suppose the fare from one point to another is Rs 110, to and fro is Rs 220, then for around 20 days of travel in a month, the fare would be 220X20 i.e. Rs 4500 approximately per passenger. Instead of collecting Rs 4500 from each passenger, the driver collects Rs 2500 each. So the driver has a fixed income of Rs 7500 per month while the commuters save money too." You can contact orrcaa1@gmail.com or manoj@rcntech.in to be part of this initiative.

Manjunath, President of Adarsha Auto And Taxi Drivers Union, believes that auto pooling is beneficial both for passengers and drivers. The Namma Auto initiative planned by auto unions is also making some headway. "We are on talks with the Transport Commissioner to introduce around 5000 Namma autos in the city with the support of TVS Motor Company. These GPS-enabled autos are equipped to give printed bills to the commuters and have cameras so that drivers cannot engage in foul behaviour," he says.

Clearly, Bangaloreans are beginning to take matters into their own hands with these solutions. Depsite this, it remains to be seen how well government bodies support these initiatives. Kiirti’s initiative for instance, has not seen any case being disposed off so far despite complaints being forwarded to RTOs about a month back. Transport Commissioner Bhaskar Rao is a supporter of the initiative and that is a good sign. One can only hope that the authorities step up to the task. ⊕

‘Energy efficiency is not just about lights or pumps, but about life and attitude’

Demand high but schools not keen: The story of Right to Education in Bengaluru

The demand for quality education at low cost remains unmet in Bengaluru, while those who manage to get RTE seats for children face situations that are against the spirit of the Act. First part of the series on Right to Education act and ground realities in Bengaluru.

City and state officials have been engaged in yet another effort to clean up the error and horror-ridden voter rolls in the state. What’s in store? How do you get on the elusive list?