Five days after an ABIDe-led committee was constituted to discuss Karnataka’s draft rules for implementing the national Right to Education (RTE) Act, it has already received several suggestions from senior educationists and NGOs.

To propose a way through the confusion regarding the implementation of the RTE Act the chief minister’s task force for Bengaluru, ABIDe (Agenda for Bengaluru Infrastructure and Development Task Force), formed a working group on September 23. The group plans to collect suggestions from the public and hold discussions with parents, teachers, NGOs, school associations and other stakeholders to discuss the draft rules proposed by the state government. 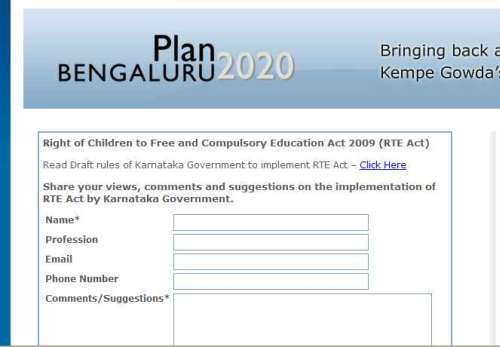 Managing Trustee of Adamya Chetana Trust, Dr Ashwin Mahesh, Member of ABIDe Task Force and ES Ramamurthy, Chief Mentor at Sikshana Foundation. Discussions are on to include more members in the committee by next week.

The group has invited comments and suggestions from the public at ABIDe’s website www.abidebengaluru.in. It has received around 50 suggestions in the five says the launch, says V Anand, Public Relations Head at Rajeev Chandrashekhar’s office.

"We have got suggestions from some senior and well-respected educationists and NGOs. The responses will be reviewed by the working committee and the commentators will be invited for discussions if necessary," he says. The comments are not being made public now. Decision regarding publishing the comments on the site will be made after the committee reviews them.

The committee was formed after many school administrations and parents approached ABIDe with their concerns about RTE Act implementation. Once the public consultation process is over, the group will present their recommendations to the Chief Minister and Education Minister. The report will be made public as well. The dates for holding consultations and submitting the report will be finalized soon, Anand said.

The RTE Act had run into trouble after many school associations in the state actively opposed it. The main contentions against the Act are that it will interfere with the autonomy and place more stress on private schools as they may have to give extra training and financial support to students admitted under RTE. There is also lack of clarity regarding concepts such as neighbourhood schools mentioned in RTE.

Organizations such as KUSMA (Karnataka Unaided Schools Managements Association) and Management Association of ICSE Schools have said that they will approach courts against RTE implementation in private schools if unsatisfied with the government’s decisions.

Vasudeva Sharma, Executive Director of the NGO Child Rights Trust (CRT), said that such initiatives are welcome, but worried about the depth of the engagement. "Any initiative to get suggestions from the public is welcome. But many people’s reactions on RTE are based on very superficial knowledge of the Act. Many do not understand the differences between the central government Act and the draft rules proposed by the state," he said.

Suggestions to ABIDe can also be mailed to suresh.nr@rajeev.in or sent by post to the Office of ABIDe, 11th Floor, Major Tower, Sir M.Vishweshvariah Center, Dr. B.R.Ambedkar Veedhi, Bangalore – 560001. No deadline has been set for submitting suggestions. ⊕

BBMP Corporators ‘support’ Ward Committees in their own way

BBMP corporators question the process of ward committee formation, yet go along with the High Court order to ensure appointments by 21st. But who are they nominating?

How many deaths before dismissal?

BMTC allows hundreds of drivers to get back behind the wheel after causing fatal bus accidents. An investigation by IIJNM students.