Did you know that rail connectivity already exists between KR Puram and Electronic City? Or between Whitefield and Yeshwantpur?

Bangalore has grown so large over the past decade that many peri-urban South-Western Railway stations are now within the greater Bangalore region. The prospect of introducing commuter trains between major city hotspots located along SW Railway’s network has therefore been attractive to many and increasingly so today, with Bangalore’s worsening road traffic situation. 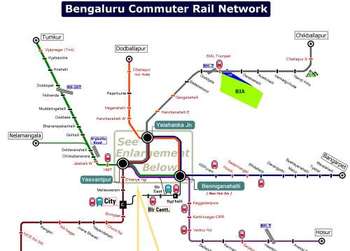 But even as the state government is in talks with the South Western Railways (SWR) to introduce local trains in Bangalore, the latter has stated that the load on their network is more than full, with no space for new services.

Both Praja.in and CiSTUP have been campaigning for over a year now, to introduce CRS in Bangalore. In July 2010, they prepared a Call to Action Report and in August 2010 organised a Namma Railu event to discuss the same. They have now prepared a Terms of Reference (ToR) to prepare the Detailed Project Report (DPR) for CRS as well.

The September 23rd meeting was called by Ranganath to kick-off the process towards preparing a DPR for CRS. Details of this meeting are available here

For many years now, the SWR has not openly supported CRS. Speaking to Citizen Matters, SWR’s Divisional Railway Manager (DRM), S Mani, says, “We are not an organisation meant to do CRS. The state government is not asking us to do it. They are asking us if we can bear it. Can we? No.” 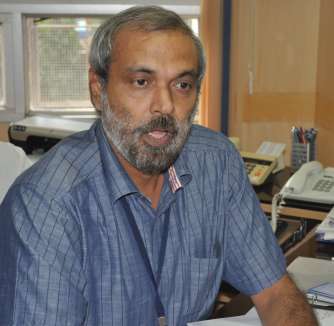 But the state government, in particular, V Madhu, Principal Secretary, IDD and Revenue Department, has been asking if the Indian Railways (IR) has any objection to preparing a DPR for this. It was for this reason that Madhu rquested the Chief Secretary to call for a meeting, which happened on September 23rd. Mani says that prima facie the SWR has no objections to the preparation of a study. “To what extent our help is required for this, depends on the proposal”, he adds.

At the meeting, Ranganath also announced that he would speak to the Chairman of the Railway Board during his next trip to Delhi, as his office would make the final decision for the railways.

It was in 1983 when, ironically, the Railways mooted the idea of commuter rail for Bangalore and recommended three commuter rail lines and a 58-km ring railway over a 25-year period. Even today, the Railways clearly state that CRS is required for Bangalore. “Whether the existing infrastructure is designed to handle this? No. If augmented, will it be able to handle? We’ll have to see”, explains Mani. He also explains that CRS should be independent of long-distance trains, but could allow streaming and linking with their stations.

Members of Praja.in who prepared the Call for Action report in July 2010 along with CiSTUP say that CRS will initially not concentrate on Bangalore City station, Cantonment and Byappanahalli because of the known challenges in this segment. They are instead asking for local trains to be introduced along the following routes at a frequency of about 20 trains per day along each route.

The study estimates that about 45 lakh people live along the above existing tracks. “About 1/3rd of this population are (sic) not served because of lack of stations and last mile within local areas. These 33% consequently move to other modes like private transport to fulfill their commuting needs, putting further pressure on roads”, says the report.

DRM’s Mani however reiterates that with 180 passenger trains and 40-45 goods trains running everyday to and from Bangalore, their network is already full. “Requests for ten more trains are still pending”, he says.

However, Sathya Sankaran, a member of Praja who prepared the report and also attended the September 23rd meeting, says SWR is not utilizing tracks to the optimum. “Trains are parked on the main track. It is because of this that they are unable to manage their schedule.” Sankaran, a resident of Sanjaynagar in north Bengaluru, is an Associate General Manager with HCL Technologies. 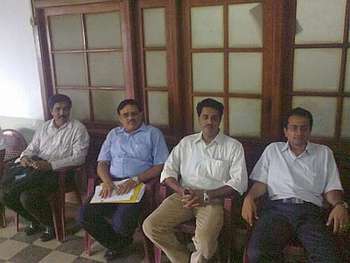 Sankaran also says the railways will have to introduce an updated signaling system to reduce headway and increase capacity. Doubling tracks and quadrupling of tracks, electrification, optimized routing and consolidation including train rescheduling, dedicated platforms at key stations and dedicated tracks for CRS are some of the requirements to increase capacity in view of commuter rail.

“You have trains that are at a platform for two hours, three hours, even six hours. That has to stop. For this an attitudinal change also needs to come from the citizens’ side”, he says.

Apart from the new routes that the report has proposed, it also recommends the use of some rapid interstate and slow passenger services. The report identifies 14 pairs of trains that can also be brought under the ambit of commuter rail for optimal utilization and to avoid duplicate services. See the list here 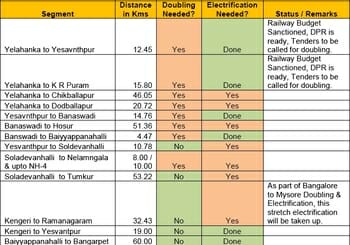 So once the DPR has been prepared, mentioning the setting up of the SPV, instituting this body could be one of the first step towards implementing CRS. As of now, no decision has been taken about funding of the project, though talks have emerged about public-private partnership (PPP). The ToR says the DPR will have to make a financial analysis and explore the option of private sector participation.

Sankaran says the DRM seemed for the idea of a PPP model at the meeting called by the Chief Secretary. “He was okay if the SPV wanted to have complete operational freedom as long as a fee was apportioned to IR”, says a post on Praja.in.

At the Namma Railu event organised by Praja.in and CiSTUP on August 30th 2010, IDD’s Madhu had said that SWR had earlier agreed to run trains on existing lines if land was acquired and given to them.

For commuters looking to hop on, this isn’t exactly doing to happen tomorrow. Stay tuned however, since the wheels of bureaucracy are finally moving.

1998 – RITES does survey for Local Trains funded by World Bank

2007 – RITES completes survey for commuter rail as part of CTTP 2007, recommending an extensive commuter rail network for Bengaluru and nearby towns

September 2010 – Praja.in and CiSTUP prepare a Terms of Reference for the Detailed project Report

September 23rd 2010 – Chief Secretary S V Ranganath holds a meeting with state government and south-western railway officials. Meeting concludes with decision to hold a meeting with the Railway Board

This chronology is partially sourced from the July 2010 Call to Action report prepared by Praja.in and CiSTUP.

Underneath the crisis in Russell Market is a startling reality: politicians are supporting traders while BBMP wants to evict them. What’s going on?

The lady of the park

There was once a barren land. Though it belonged to the people, they had no rights. Her husband fought for that land and got it back. She turned it into a beautiful park for everyone.

‘Do not push RTE into all unaided schools’, says ABIDe