The short film has been a part of the young Bangalorean’s vocabulary for some time now. But last weekend the entire movement received a fillip when Suchitra’s Centre for Film & Drama (CFD) brought together 50 short films made by 29 filmmakers from six states across India under the Short Film Festival.

Even if the cinema was not always cutting edge, there was an abundance of ideas, creative experiments and youthful vibrancy. You could not but help notice the buzzing energy in the air as these filmmakers, many of them just out of college, shared their work in a ‘housefull’ screening hall. Along with the motifs of youth, came themes that touched topics as wide-ranging as global warming, suicide, child molestation, recession, leadership, crime and the after life. So if you thought that Generation Now does not respond to the world around them, think again. 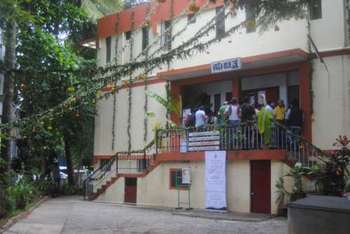 Reflecting this concern for the world was Anthara made by Guruprasad M G. At a duration of slightly over 27 minutes it was amongst the longest films at the festival, and stood apart for its life-like portrayal of child molestation. Later the camera shifted to the unrest within with One Track Mind from Sidhanth K S. Using an approach most associated with Guerrilla filmmaking, Sidhanth’s entire film is pre-occupied in a humorous way with the working of the suicidal mind. Adopting a style that has much in common with Absurd Theatre, Sidhanth takes his narrative forward.

In other films, it was the approach to story telling that triumphed. Amongst these ‘tales with a twist’ were Prince’s Shaving and Aamreeta Gautam’s Ek Raat – both coincidently films that also dwell on the after life. Aamreeta thought up the script for the film that is her first attempt at cinema-making over the many evenings when she was returning from office and found her office bus stuck near a graveyard to the heavy traffic en-route. She later moved the action to a more rustic setting. In fact this ability to rapidly convert an idea into a cinematic experience was a re-current theme among many of these young filmmakers.

Later filmmaker, theatre person, journalist, politician and founder of CFD Prakash Belawadi spoke to Citizen Matters, sharing his thoughts on the film festival and the evolution of the short film as a cinematic form.

How did the idea for the short film festival first come about?

We’ve been doing this for quite some time at CFD. Although for the last year or so I’ve not been very active running CFD because I was otherwise pre-occupied. Then we made a really painful decision about a month ago and decided to close CFD on Miller’s Road and move operations to the Suchitra premises. CFD is now a trust mandated under the Suchitra Cinema and Cultural Academy.

We always believed that there is enthusiasm and a young generation out there that is really keen on looking at an opportunity to expose their films to an interested group of people. Besides, there are so many changes that cinema itself has undergone. The very idea of visual media today is that it’s a remarkable, forbidding and overwhelming presence in the lives of young people today. There is visual media on their mobile phones, laptops, computers, television, Facebook, My Space, Google Videos and You Tube. To ignore it is to pretend that the world has not changed.

So CFD has been here for just over a month and it is was quite natural that one of the first things we would do was announce a film festival. But in this particular instance, we wanted to do a short-term film course here, and when we were doing that Shashidhara N (Secretary of Suchitra Film Society) suggested that we focus on short films. So we grabbed that idea and jointly launched it.

But looking at the response and the quality of work that we see here, I think we need to grow this into a much bigger idea.

As you said filmmaking itself is changing, so what do you see as the future of the short film?

I think the short film will prevail big. I don’t think it’s going to go away for a long time. There are people who heard about the festival, and in a matter of three days were able to make a short film. This was unthinkable one generation ago when there were no DVDs, You Tube, Google and stuff like that. If you made a short film, it meant that you brought raw stock, got a professional camera and hired a professional camera man and sound recordist. Then you shot the raw stock, took it to Chennai or Mumbai and developed it. Later you made a married print and could show your film. It made it a really expensive idea. It was the indulgence of the richest and the maddest ones. But today technology makes filmmaking so accessible. You can try out your cinematic ideas with a short film.

The other thing is a deeper philosophical question. Humans need to express themselves all the time. If there is access, opportunity and an audience, they will make those short films. They are not going to stop. Not to recognise that is to deliberately de-intellectualise oneself. A true sense of the intellectual is to understand how one’s own life’s experiences intersect with those we get from communicative phenomena. That is what we are trying to do here.

Where do you see the distribution network for these films?

If I make a short film, I cannot show it at PVR or release it at any of the big theatres. They would not show it on TV. The big media has kept us out. But there is a subversive influence through the Internet. I can now potentially make a four-minute film, put it on Facebook and there could be a viral spread of this work. So in a month or so even a million people could have seen it.

So I think the question has to be reversed. There is now a huge distribution mechanism available at your finger tips. But what is not always available are the artistic and intellectual abilities to produce great content. That is what we should be worrying about.

As part of this film festival, what was the process used to invite entries and select content?

In a sense it was to announce ourselves because we had shifted location and emphasis. We are becoming a serious academic institution and a place of public discourse. Nothing academic is very useful to us if it isn’t centered in the public realm.

The second part was to use the available infrastructure and provide a platform where people could showcase their work. Nobody could have predicted the crowd here. But we thought it was possible and the proof of the pudding is in the enthusiasm of the young people participating here.

The important word is ‘young’. A short film is a young film as well. The way they look at the world is very different. Look at the repeated use of cell phones, laptops, programming, text messaging, walking and jogging in the films. It’s the way the young imagine their experience and associate with all the time.

It’s not an accident that there is the repeated imagery of people waking up from bed and doing ordinary things like brushing your teeth or shaving. It’s a way of confronting and understanding experience.

So when they actually talk of the other, it’s very personal. It’s about relationships of great intensity. That’s how they see that other.

When the young express their experience, it starts from these raw feelings of one being alone and reacting to the other. The idea of the public space itself comes much later in the imagination. But they are always alone in the public realm. They are in traffic or crossing the street. These are not accidents. It’s how they confront the idea of experience.

The other thing is a very technical thing. There is repeated use of the lower angle. They are quite in contact with childhood imagining. As we grow up, we do not see the ground any more. But when you are a child you see things on the ground all the time, and they are very close to that experience. It’s really sad that this goes away when they become professional filmmakers. But right now they have that. So there’s a rawness and energy.

If you see their choice of music, it’s also completely different from what popular cinema wants. You would think that they are influenced by the copious production of Bollywood and its vernacular clones in India. But they imagine the world differently. I think that’s quite amazing.

Everything else is also close to them. Newspapers report supposedly popular things and they don’t understand it. The TV spews out garbage. And you know what popular cinema is. They need to find a way to announce to the world and themselves who they are. The short film is an opportunity. You spend 800 bucks to make a film. I think you cannot argue with this.

How do you see the way forward in providing a platform for the short film?

There should be a certain amount of provoking and mentoring in this process. But the leadership should be with the young. That’s why Anand Varadaraj is leading it and this is his project. Some of us like Professor Manu Chakravarthy and I would just like to provoke discussion and mentor the process till it acquires a tangible form.

Many of these things can become random exercises. We need to make it a movement. So maybe in the initial days we need to be there and then retire when someone else can manage it. This movement needs to stay with the young.

What’s around the corner?

Chitra Samooha will be screening Haro Hakkiyaneri directed by A N Prasanna and produced by Geeta Prasanna on September 25th and 26th 2010.

Is the brinjal on your plate safe?

Activists in Bengaluru created awareness on GM food with a Brinjal festival at Lalbagh this Sunday. With GM Brinjal ready to hit the vegetable market, how much do you know about GM food?

After their notes recounting harassment went viral on social media, both senior police officials and mainstream media took note of the incident.