Of the 35 lakes in Mahadevpura assembly constituency in northeast Bengaluru, 23 have become dysfunctional, according to a report authored by urban ecologist Dr Harini Nagendra, Ramesh Sivaram (member of resident association federation of Bellandur) and Dr S Subramanya (Professor at University of Agricultural Sciences). The report classifies seven lakes as ‘extremely polluted’, another seven as ‘heavily polluted, drying’ and nine lakes as ‘completely dry’. Only 10 ten lakes are categorised as healthy while two are under restoration. Bengaluru-based Harini is also co-author of papers with US-based political scientist Elinor Ostrom, Nobel prize winner for Economics in 2009.

The report highlights issues relating to each lake and recommends specific restoration procedures for each. It was submitted to former BBMP Commissioner Bharat Lal Meena in June.

The researchers believe that it is important to develop an integrated approach to lake restoration in Bengaluru. Restoration should facilitate biodiversity, recreation, traditional uses such as idol immersion and domestic usage, and most importantly ground water recharge since much of the city is reeling under water shortage.

For instance, Bellandur lake, one of the largest lakes in Mahadevpura with an area of 307 ha, is also one of the most polluted lakes, and residents in the area are forced to rely on BWSSB water supply as the contaminated ground water is not potable. The contaminants in the lake include heavy metals, industrial affluents, sewage from residential areas and hospital waste.

Pollution levels in the lakes in Mahadevpura constituency. Two of the largest lakes Varthur and Bellandur lakes are heavily polluted. Source: Report.

Receiving sewage from several inlets, Bellandur lake lets out these pollutants to other lakes in the Mahadevpura area, including Varthur lake – another huge water body with area of 166.87 ha. High pollution leads to accumulation of silt, which gradually makes the lake bed non-porous and reduces the amount of water percolating into the ground. The water spread area of the lake is reduced not only by individual encroachments, but also by tree plantations done by BBMP to increase the green space. As water spread area decreases, the amount of recharge also goes down.

“For water recharge, maintaining the deep water areas is important. Many lakes in the city have water spread, but not enough depth. Much of the water is lost due to evaporation,” says K M Najeeb, Regional Director of the Central Ground Water Board (CGWB). In Bellandur lake, 221 ha of the lake is deep water area, while for Varthur lake, the entire water body comprises deep water area. 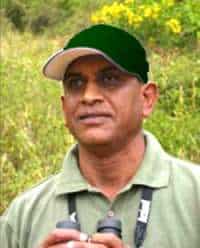 S Subramanya, Professor at UAS and co-author of the report.

The Mahadevpura-Whitefield region suffers from water shortage like much of the rest of the city. Ground water levels are depleting and most wells here run dry during summer, says Harini. The CGWB has classified the area as having intermediate levels of ground water. Najeeb says, “If the pollutants in lakes are removed and right practices are adopted, there is lot of potential for water recharge in Mahadevpura. The chemical contaminants such as nitrates are also quite high in most lakes. These contaminants are not easily detectable, so people drink this water, but it is harmful.”

The report suggests that lakes in the area should be dredged, sewage should be diverted and multiple STPs (Sewage Treatment Plants) be built to check pollution. However, restoration attempts by government agencies seem to be ignoring many critical aspects. Even when one lake is restored, its upstream and downstream lakes continue to be polluted. This polluted water again enters the restored lake through canals, making the entire rejuvenation exercise meaningless.

Another concern the researchers have raised is that the natural structure of the lake itself is changed during restoration. Most lakes in the city have a sloping lakebed comprising deep and shallow areas, but now all lakes are being dredged in a bowl shape during restoration. In addition to high risk of flooding and disturbing biodiversity, this can also impact ground water recharge. Manvel Alur, Environment management specialist at EnSYDE (Envrionmental Synergies in Development), says, “Lakes that are lined like a soup bowl limits percolation and increases the stagnation of water. Proper inlet and outlet channels should facilitate circulation.”

The report suggests that a unique Integrated Water and Resource Management (IWRM) approach should be applied to each lake based on its size, drainage pattern, biodiversity and patterns of human use. Sewage pipelines should be laid in new BBMP areas to avoid sewage entering lakes. Biological treatment and silt traps should be used to prevent silt accumulation. Direct access to the lake should be restricted and encroaching water spread area for constructing parks and planting trees should be avoided. Also no water hungry tree species should be planted close to the lake.

According to Najeeb, all lakes should be de-silted at least once a year to enable effective percolation of water into the ground. Drilling small borewells of 10-15 metres depth on lake beds also helps; this is being done by the CGWB. “The STPs that we have now do only secondary treatment of lake water. This removes only suspended particles, but not chemical contaminants. Lake water should have tertiary treatment facilities. This can be decentralized too as it is not very expensive. The treated water let into the lake percolates into the ground and can be used for drinking,” he says. BWSSB already operates two tertiary plants – one in Vrishabhavathi valley and another in Yelahanka valley with a total capacity of 70 MLD (Million Litres per Day) – but the water is being used for non-potable purposes.

Proper management of borewells is also necessary to improve ground water levels. “There is no regulation on the number and depth of borewells being drilled. Enforcing penalties for illegal water usage and improving recycling practices are necessary,” says Manvel.

While Meena had promised to look into the report, the new Commissioner H Siddiah is yet to give an audience to the authors. “We are still waiting for a response from the Commissioner,” Harini says. ⊕

The reason for Bengaluru’s water scarcity is our disconnect with the source of water. To reverse this, each ward should be made to generate water locally, and Cauvery water be taxed heavily, opines the author

With the BBMP elections round the corner, Citizen Matters spoke to the state’s CEO on ways to mitigate the crisis arising out of error-ridden voter lists.

Real estate sector doesn’t see any value in existing transferable developmental rights policy. Lack of regulation on TDR has led to scams, and the trust has been non-existent. Before the city goes for any infrastructure development, the issue needs to be addressed.